Pfizer and Moderna Covid-19 vaccines are vaccines – not anything else

“Only governments are calling it a vaccine,” reads a message posted and shared many times on Facebook.

“They think if they call it a vaccine long enough, people will think it is.”

It then claims that Pfizer and Moderna, two pharma companies who have developed Covid-19 vaccines, describe them in more ominous terms.

“Pfizer calls it a 'Biological Agent'. They stress is is [sic] not a vaccine it is in the 'Investigative Stage'.”

It adds: “Moderna has stated that theirs is not a vaccine, it is an 'Operating System designed to program Humans'. They are very open about it.”

The World Health Organization has called for people to report false information about Covid-19 vaccines.

Is there any evidence that the Pfizer and Moderna vaccines are something more sinister? 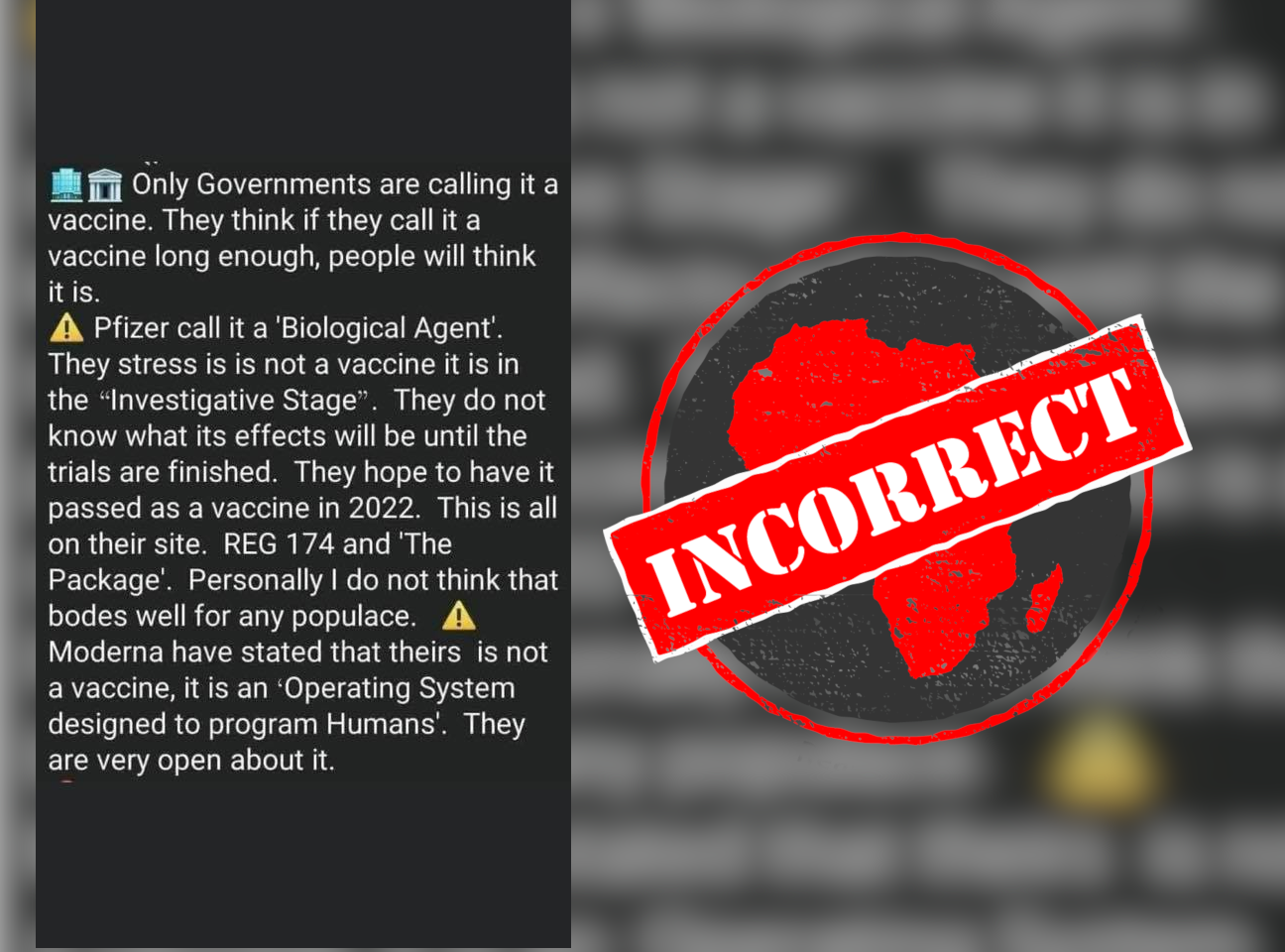 There is no evidence that Pfizer and Moderna have ever described their vaccines as anything other than vaccines.

Moderna does regularly refer to its Covid-19 vaccine by its technical name – mRNA-1273. But, in the company’s first announcement of the vaccine’s development, Moderna said “mRNA-1273 is an mRNA vaccine”.

As a way to explain how its vaccines work, Moderna compares mRNA to computer code. In the comparison, individual proteins are seen as apps, and RNA as the code that builds those apps. Moderna says its vaccine technology is like a computer operating system, able to change the mRNA in each vaccine it develops against a specific disease.

But this is only a comparison – it’s not reality. Moderna has never claimed that its vaccines are “designed to program humans”. And it always refers to its vaccines as vaccines.

Moderna’s only other description of mRNA-1273 is as a “vaccine candidate” – a vaccine yet to be approved for use. It no longer uses the term. The vaccine has since been approved for use in several territories.

Similarly, when Pfizer announced that it would be working on a vaccine with BioNTech, it referred to the vaccine candidate by the name “BNT162”, and called it a “potential Covid-19 mRNA vaccine”. The company has not referred to the product as a “biological agent” and describes it as a vaccine.

Lack of knowledge about how mRNA vaccines work may have led to the many claims that the vaccines change our genetic material, or cause genetic damage.

These claims have been repeatedly disproven – by Africa Check and other fact-checking organisations.