Ring of truth? No, all fingers have veins leading to heart, not just ‘ring’ finger

A graphic shared on Facebook claims: “The wedding ring goes on the left ring finger because it’s the only finger with a vein that connects to the heart.”

The illustration in the graphic shows a gold ring being placed on the fourth finger of a right hand, next to the pinkie finger.

We already suspected this claim was untrue, but we took a closer look. 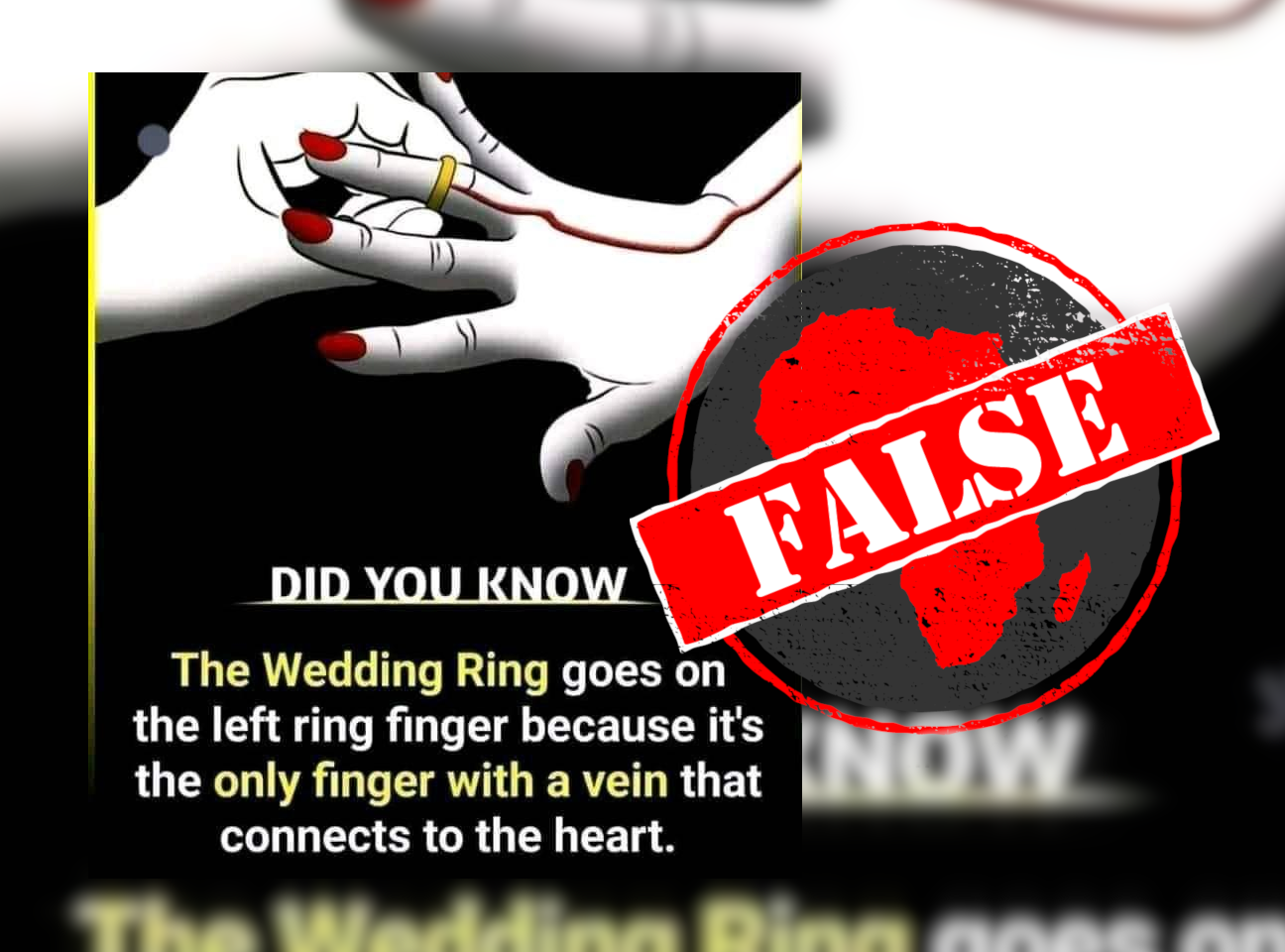 Veins connect all fingers to the heart

The cardiovascular system is the system of veins, arteries, capillaries and the heart which transports blood around the body. Arteries carry blood away from the heart, and veins carry blood towards it.

The cardiovascular system pumps blood to and from every part of the body. So the entire body is connected to the heart by both veins and arteries.

This applies to all of the fingers in both hands. It is clear from anatomical models of the hand that the veins in the fingers join together into larger veins which lead back to the heart. You have veins in all your fingers, not just the “ring finger” of the left hand.

Visible Body, an organisation that creates visualisations of the human body for educational purposes, writes that the pattern of blood vessels in the hand “is pretty much all the same, and there isn't one vein in your hands linked directly to the heart”.

The veins of the fingers join to veins like the cephalic vein, which carries blood from the hand back to the heart

While this myth is untrue, some have traced this belief in a “love vein” back to the ancient Egyptians. It was known in Latin as the vena amoris but it’s unclear whether this belief influenced the finger that wedding rings are traditionally worn on, or why this was usually the fourth finger of the left hand in many Western European countries.

In a 1932 book on common folklore and superstitions, British physician Charles Thompson quoted 17th-century author Thomas Browne who said the fourth finger “was chosen because a particular nerve, vein or artery is conveyed thereto from the heart”.

In 1917 mineralogist George Kunz quoted the fourth century Roman philosopher Macrobius, whose most famous work also made reference to the vena amoris.

But other theories exist

Thompson wrote: “The left hand was chosen for the wedding ring on account of the inferiority of that hand to the right and so obedience was typified.”

This means a wife’s obedience to her husband. It did not become common for men to wear wedding rings until the 1940s and 1950s in the US, and it is still not the norm in all countries.

Lillian Eichler, a copywriter and author from the US, suggested too that “the ring is worn on the left hand to signify the subjection of the wife to the husband”, but also wrote in 1924: “Probably the true reason for wearing the ring on this finger is that it is the least used of all the fingers.”

Other theories include that it was customary for the priest or the groom to touch the bride’s first three fingers with the ring, saying “In the name of the Father, of the Son and of the Holy Ghost”, before placing the ring on the fourth finger.

To complicate matters further, there is little consensus in history – or today – on what finger is in fact the “ring” finger.

Pliny the Elder wrote in his first-century Natural History that it was customary to wear rings on what is now known as the ring finger, but that this changed as it became fashionable to wear rings on multiple fingers.

Between the eleventh and fifteenth century in France, wedding rings were placed on the right hand, sometimes on the middle finger.

It was also briefly fashionable in England, to wear wedding rings on the thumb, which Kunz attributes to the popularity of especially large wedding rings.

Not only is it not true that “the left ring finger” is the only finger connected to the heart by a vein, but what finger you put your wedding ring on has always depended on where and when you lived.