“Should in case USA, NATO and Western World interferes,” they add.

There are two versions. One screenshot has two photos of large missiles, the first sitting on metal risers in a patch of grass, the second on a massive multi-wheeled military vehicle. The other version shows a single photo of yet another missile, on a similar vehicle.

The claim has also appeared on Twitter. It started circulating online soon after Russian president Vladimir Putin said his country’s nuclear force would be put on high alert, a few days after Russia invaded Ukraine on 24 February.

Russia’s Satan 2 liquid-fuelled nuclear missile does exist. But it’s still in development and is not capable of “destroying everything breathing in the world”. And not one of the three photos shows the missile. 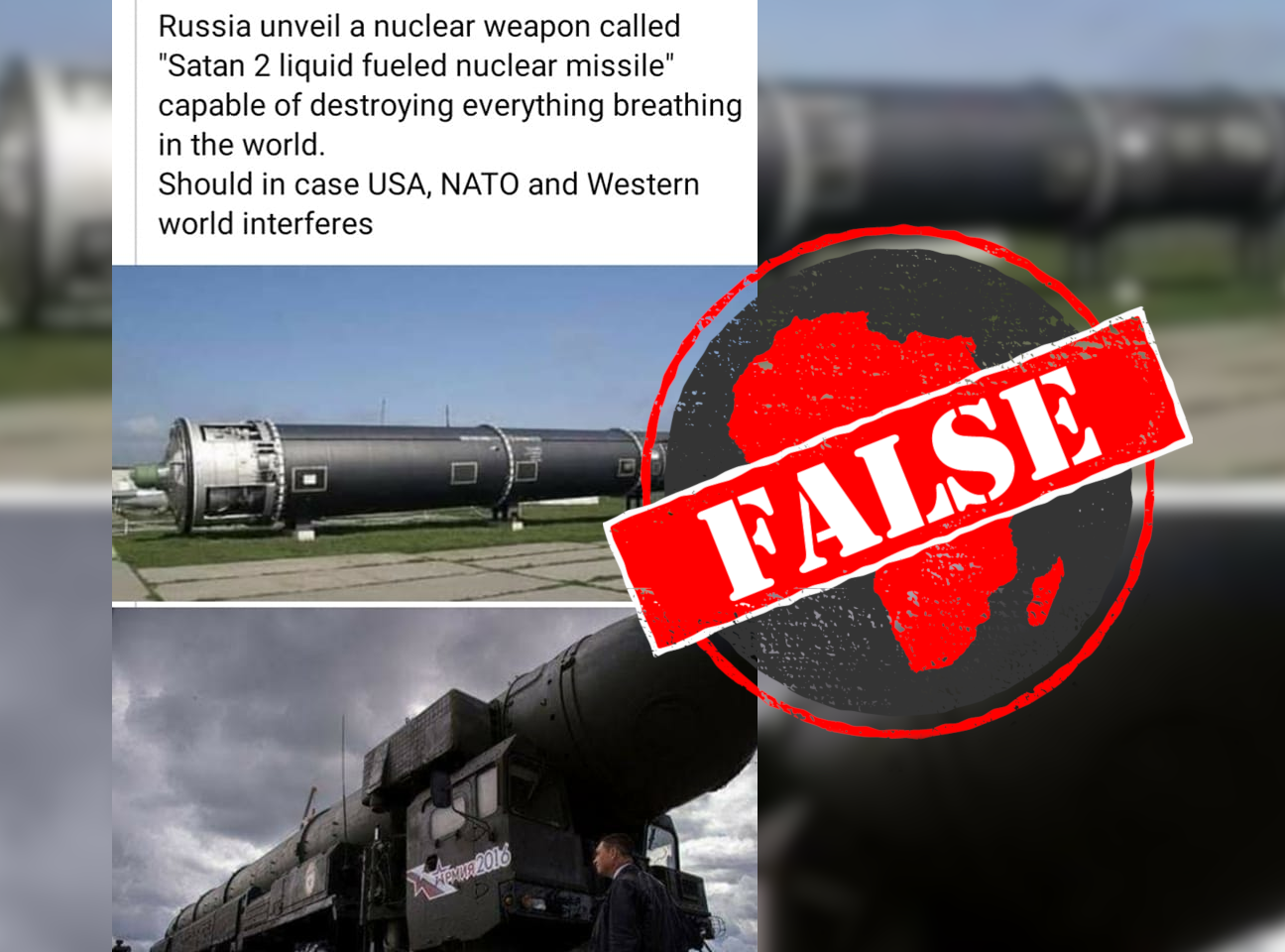 Satan 2 could ‘wipe out an area the size of Texas’

SS-X-30 Satan 2 is the name Nato – the West-aligned North Atlantic Treaty Organization – has given the missile. Its Russian name is RS-28 Sarmat.

The missile is being developed to replace Russia’s ageing R-36 range of nuclear missiles, known by Nato as SS-18 Satan. That’s according to the Missile Threat website produced by the Center for Strategic and International Studies. The weapons were first developed under the Soviet Union. The last operating missile in the SS-18 Satan range is the R-36M2 Voevoda.

The new Satan 2 could be a devastatingly powerful weapon, but won’t cause total global destruction.

Instead, the Sarmat was “capable of wiping out parts of the earth the size of Texas or France”, Russia’s state-owned Sputnik news agency reported in 2016. Sputnik was in turn quoting the Russia-wide TV channel Zvezda, also owned by the state, which only said it was capable of “wiping out areas the size of Texas”.

The total area of the US state of Texas, including land and water, is 695,660 square kilometres. It makes up roughly 0.4% of the world’s landmass.

There is no evidence that the Satan 2 could destroy every breathing thing in the world. And it hasn’t recently been “unveiled” to be used against the US and Nato should they interfere in Russia’s new invasion of Ukraine.

Missile Threat says the weapon is “currently under development” – not good to go. It has been reported that Satan 2 will be ready for use by the end of 2022, but its deployment has been plagued by delays for years.

Then there are the three photos used in the claim, none of which show the Satan 2.

A reverse image search of the first photo led us to a display at a museum in – wait for it – Ukraine. It was taken at the Museum of Strategic Missile Forces near the town of Pobuzke, some 250 kilometres south of Kyiv.

Ukraine was once part of the USSR, the Union of Soviet Socialist Republics. After the Soviet Union’s collapse in 1991, an independent Ukraine became a non-nuclear country.

The museum houses remnants of Ukraine’s nuclear past as a Soviet state. One exhibit is a neutralised SS-18 Satan missile, part of the range of R-36 weapons the Satan 2 is being developed to replace.

The photo can be seen in the Dreamstime stock image collection. Here its caption reads: “SS Rocket 18. Satan in the museum. In Ukraine, there is a special museum showing the weapons, after the adoption of decisions on the country s nuclear-free status.”

A May 2021 video tour of the museum shows the missile sitting on its risers in its patch of grass.

The confusion about which missile the photo shows may be because it’s appeared in several recent articles with captions describing it as a Satan 2. But the captions credit the photo only to a tweet by an unverified Twitter account.

The first photo used to make the claim shows a mothballed Satan missile in a Ukrainian museum, and not the newer Satan 2. The other two do show Russian nuclear missiles. But both are of a different type – and one of them is again not operating and just on display.

A reverse image search of the second photo led us to six-year-old news articles that identify it as a Topol nuclear missile. The photo is credited to Agence France-Presse, or AFP.

Its caption reads: “A Russian Topol intercontinental ballistic missile launcher is shown at the permanent exhibition of military equipment and vehicles at Patriot Park in Kubinka, outside Moscow, on September 8, 2016.”

Russia has two types of Topol nuclear missile, according to Missile Threat. The first is the RT-2PM Topol (Nato name SS-25 Sickle), deployed since 1988, and the second the RT-2PM2 Topol-M (SS-27 Mod 1 Sickle B), in service since 1997.

It’s not clear which Topol the photo shows, but it’s not the Satan 2 missile.

The third photo is 10 years old, a reverse image search reveals. It shows a RT-2PM2 Topol-M Sickle B nuclear missile on a mobile rocket launcher during rehearsals for Russia’s 2012 Victory Day Parade.

The annual Victory Day Parade through Moscow celebrates Nazi Germany’s surrender to the Soviet Union on 9 May 1945, at the end of the second world war.

The photo was taken by prolific military blogger and photographer Vitaly Kuzmin. It appears in his report on the first rehearsal for the parade on 19 March 2012 at a training ground in Alabino near Moscow.

His caption reads: “A Topol-M (in its container) on MZKT-79221 mobile launcher during rehearsals for the 2012 Moscow Victory Day Parade.”