A message circulating on social media in South Africa, including WhatsApp and Facebook, warns a new, enhanced version of WhatsApp – “WhatsApp Gold” – is now available, but is actually malware.

“There is a video that will be launched tomorrow in Whatsapp and is called Martinelli,” it says. “Do not open it. Goes into your phone and nothing you do will fix it.”

It repeats: “If you receive a message to update Whatsapp Gold * Do not open it! They just announced that the virus is serious. Send to everyone.” 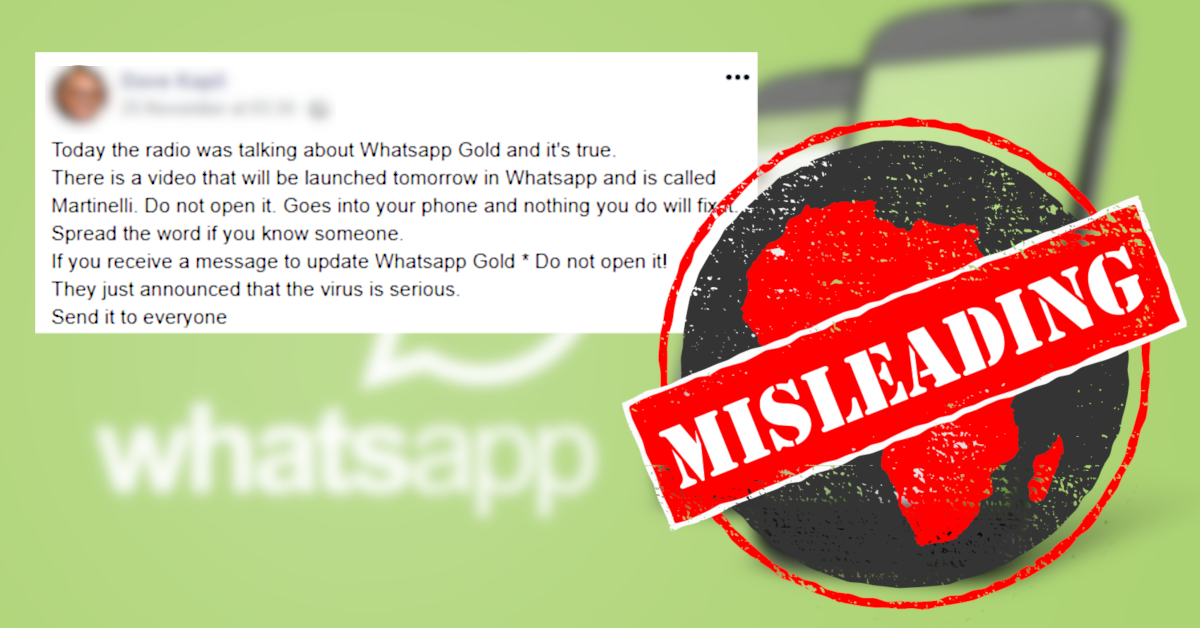 According to the Sun newspaper, the “WhatsApp Gold” scam started circulating online in 2016. The original message claimed that “WhatsApp Gold gives you the ability to hold video chats, send 100 pictures at once, and delete messages hours after you have sent them.”

Users were sent a link through which they could download the "update", the Sun article says, but it took them to “a website riddled with malware”.

Another newspaper, Evening Standard, explains more: “WhatsApp Gold is a hoax set up by scammers to dupe users into thinking there is a secret update that giving them enhanced features of the messaging app.”

The scammers would send a link that would supposedly allow people to download WhatsApp Gold. But instead it downloaded malware.

“Malware” is a contraction of “malicious software”, says AVG, a software developer company. This can be “any piece of software that was written with the intent of damaging devices, stealing data, and generally causing a mess”.

Viruses, Trojans, spyware and ransomware are all types of malware.

The Australian Cyber Security Centre urged users to remember that any updates to WhatsApp usually happen “automatically through the app”.

The message about the Martinelli video created a similar panic. It said that if you opened the video, it would download a virus to your phone, according to the Evening Standard. But the video doesn’t exist.

The Martinelli video seems to be a non-existent front for the real scam, WhatsApp Gold, says the Sun article.

According to the Independent, there is no indication that WhatsApp has ever sent out a video that has anything to do with the word “Martinelli”. WhatsApp itself doesn’t send videos to its user base, let alone announce them in messages.

“The message is a very strange kind of spam: it doesn't require anything of you, won't trick you into doing anything, and even instructs you to be vigilant about being tricked, so that you'd be unlikely to do anything anyway,” the Independent says.

Tips to protect yourself against malware

So if you receive a message like this, ignore it and delete it immediately.