A number of Facebook posts express concern about the ingredients in the vaccine against Covid-19 developed by Oxford University and pharmaceutical company AstraZeneca.

There is an element of truth to these claims, but there’s nothing sinister or alarming going on. Let’s explain what’s in the Oxford-AstraZeneca vaccine, and how it works. 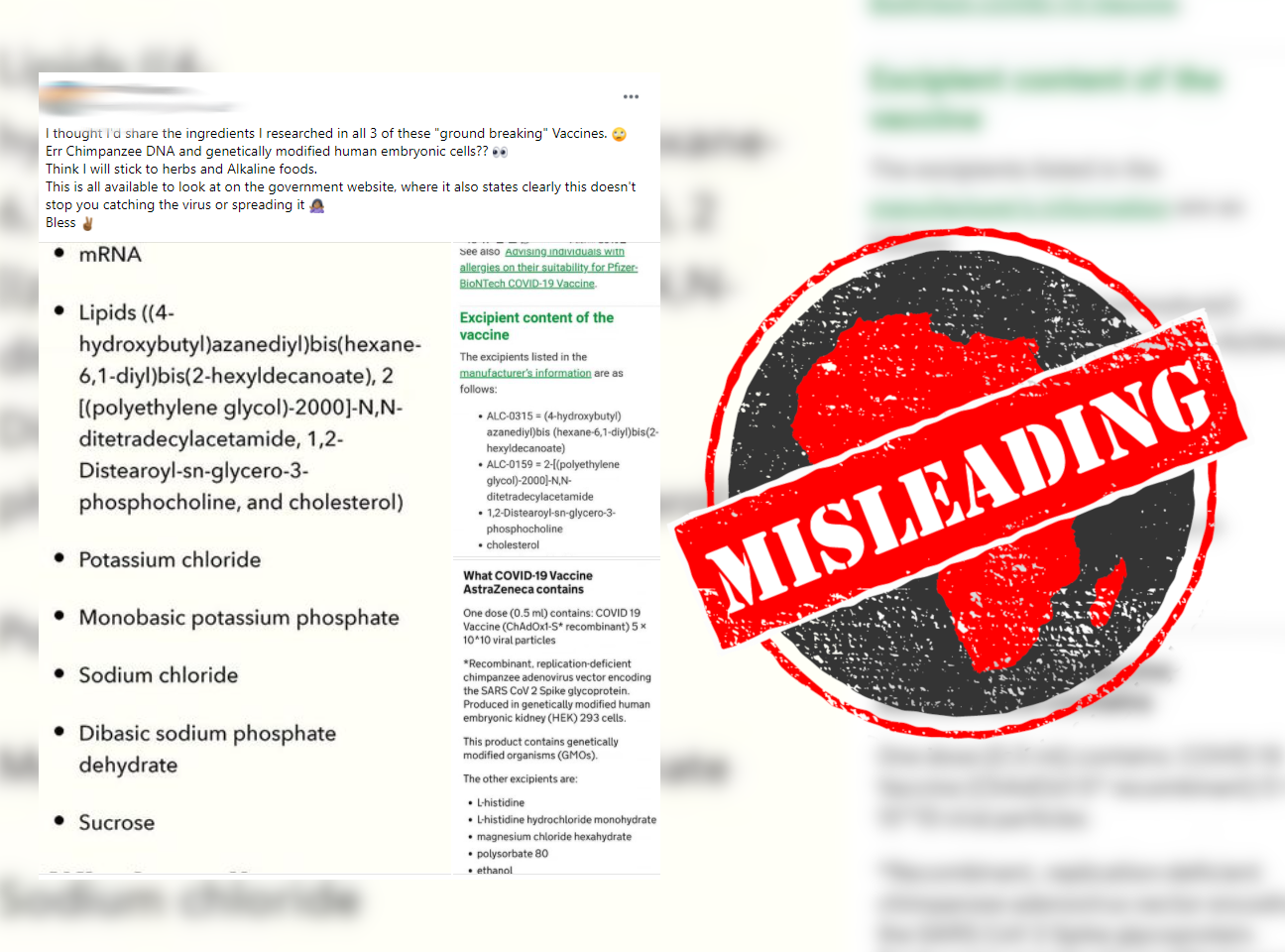 AstraZeneca’s vaccine contains a single active ingredient, called AZD-1222. This is the part of the vaccine that gives protection against the virus which causes Covid-19, known as Sars-CoV-2.

Many vaccines contain some material from the virus which they are designed to vaccinate against. As the US Centers for Disease Control and Prevention explains, vaccines work by “imitating an infection”.

This infection does not actually cause the disease it’s vaccinating against, but the body’s immune system learns to respond to it and “will remember how to fight that disease in the future”.

AZD-1222 is no different. Many of the concerned Facebook posts include a picture of the package insert or ingredients list for the vaccine, which includes something called ChAdOx1-S. This is the part of the vaccine derived from a chimpanzee virus.

ChAdOx1 is made by genetically modifying a chimpanzee adenovirus. This is a type of virus which is common in many mammals, including humans.

Despite the claims in one concerned Facebook post, adenoviruses are not in the retrovirus family, which includes HIV and the related primate virus SIV.

The chimpanzee virus used to make ChAdOx1 has been altered so that it is harmless and cannot replicate. Some of the genetic material from the Sars-CoV-2 virus has also been included in the chimpanzee virus. In particular, ChAdOx1-S includes the genetic information that codes for the distinctive spike protein on the outside of Sars-CoV-2.

ChAdOx1-S is referred to as a viral vector. It acts as a delivery system for the part of the Sars-CoV-2 virus which is included in the vaccine.

Since the actual Sars-CoV-2 virus would cause Covid-19, the small piece of it required for the vaccine is delivered in the harmless ChAdOx1-S vector instead.

ChAdOx1 vector used in past, no cause for concern

The ChAdOx1 vector has not only been used in Oxford-AstraZeneca’s Covid-19 vaccine, but has been researched as a potential vector for a number of vaccines since it was first developed.

ChAdOx1 was created in 2012 and trialled in 2014 with the intention of creating more effective flu vaccines.

In the original human trial of the vector, the authors explained that they used a modified chimpanzee virus because there is widespread resistance to similar human viruses. A vaccine made using a similar human virus as a vector is likely to be destroyed by a person’s immune system before the vaccine can be fully effective.

The study found “no serious adverse reactions” in a small trial of its safety. It has since been used as a vector in other vaccine candidates including potential vaccines against Zika virus, Mers, tuberculosis, and malaria.

There are concerns about how effective the Oxford-AstraZeneca Covid-19 vaccine is against some variants of the Sars-CoV-2 virus. This has led South Africa to halt its rollout of the vaccine.

Several European countries have also halted rollout of the vaccine because of a potential increased chance of blood clots.

But experts have noted that fewer clotting events have been reported by Oxford-AstraZeneca vaccine recipients than should be expected from a healthy population of the same size.

The World Health Organization has said that the potential risk should be investigated, but has recommended that vaccination programs using the vaccine go ahead as planned.

These concerns are not linked to the use of the ChAdOx1 vector to make the vaccine.