In April 2020 Madagascar’s president Andry Rajoelina launched Covid-Organics, a herbal remedy he claimed could cure Covid-19. There is no evidence that it does.

Now, according to news reports posted on Facebook, the African island country has had to impose a new lockdown due to a “surge in virus cases”. Most of the reports are credited to the news agency AFP.

“Madagascar reimposes lockdown as Covid-19 cases rise,” reads the headline of an article published on Punch, a Nigerian news site, on 5 June.

The reports claim that a new lockdown was imposed on Madagascar’s Analamanga region, which includes the country’s capital of Antananarivo, on 5 June. The measures include a ban on traffic entering and leaving the region and a curfew on street movement.

“Used to registering dozens of coronavirus cases a day, Madagascar has in recent days seen an exponential rise in daily numbers, jumping to a record 216 cases on Saturday,” Nigeria’s Channels TV reported.

But many of the reports have been flagged as possibly false by Facebook’s fact-checking system. Has Madagascar reintroduced a lockdown after a surge in Covid-19 cases? 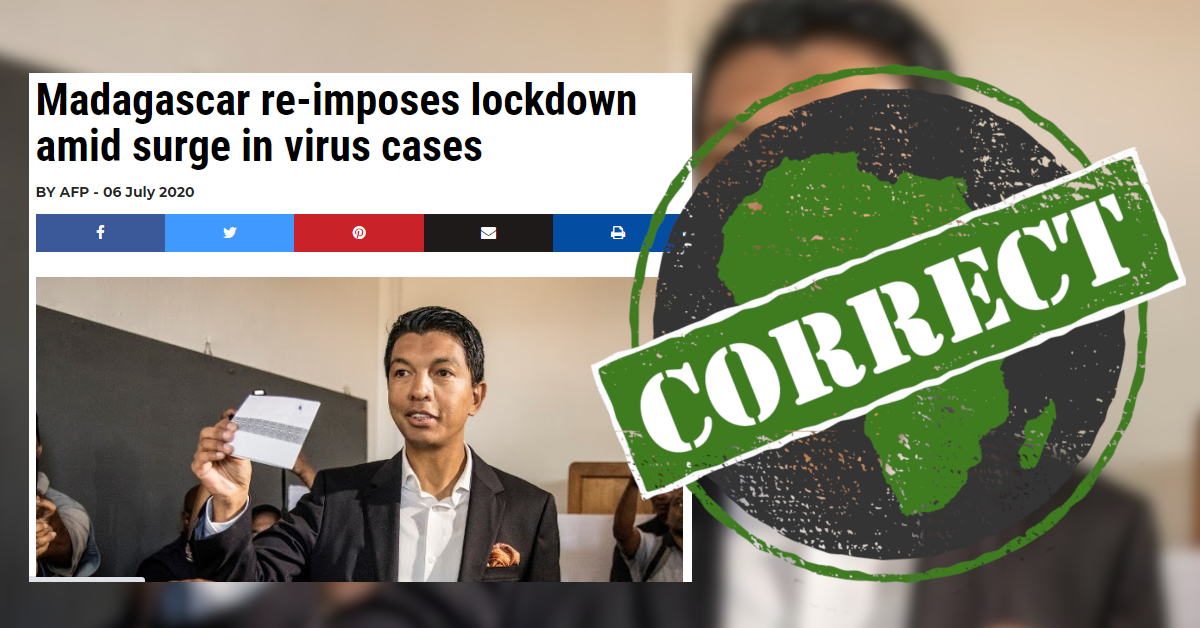 On 4 July, Madagascar’s Council of Ministers released a statement announcing a reintroduction of lockdown measures in Analamanga.

According to the statement, the lockdown would be imposed from Monday, 6 July. Entering and leaving the region would be banned and only one person would be allowed to exit each household from 6 am to 12 pm to stock up on supplies.

According to the Madagascar Express, over half of the people tested were found positive, with 209 of the 216 positive cases identified in Antananarivo.

The Express also reported that two local hospitals had reached capacity in Antananarivo, which has been identified as Madagascar’s Covid-19 epicentre.

By 6 July 2020, Madagascar had reported 2,941 cumulative confirmed cases of Covid-19 to the World Health Organization, with a total of 32 deaths. – Naledi Mashishi