A popular post on Facebook claims that the “longest road in the world that a person can walk on” stretches from Cape Town in South Africa to Magadan in Russia.

The post includes a map of the world showing a route marked from Cape Town, a popular tourist destination on the southwestern coast of the continent and the second-largest city in South Africa, to Magadan, a far northern city of 90,000 people on the Sea of Okhotsk, where the annual average temperature is below freezing.

Information on the map says it would take 4,492 hours to walk the 22,387 kilometres indicated. The post makes a similar claim, that “you will need 4492 hours or 187 days of walking without stopping, but if at a normal rate and you will walk for only 8 hours a day, you will need 562 days to cross that road”.

Since publication on 20 November 2020, the post has been shared nearly 5,000 times and viewed 7.7 million times. But it’s been flagged as potentially false by Facebook’s fact-checking system. We investigated whether this is the top contender for the longest hike possible. 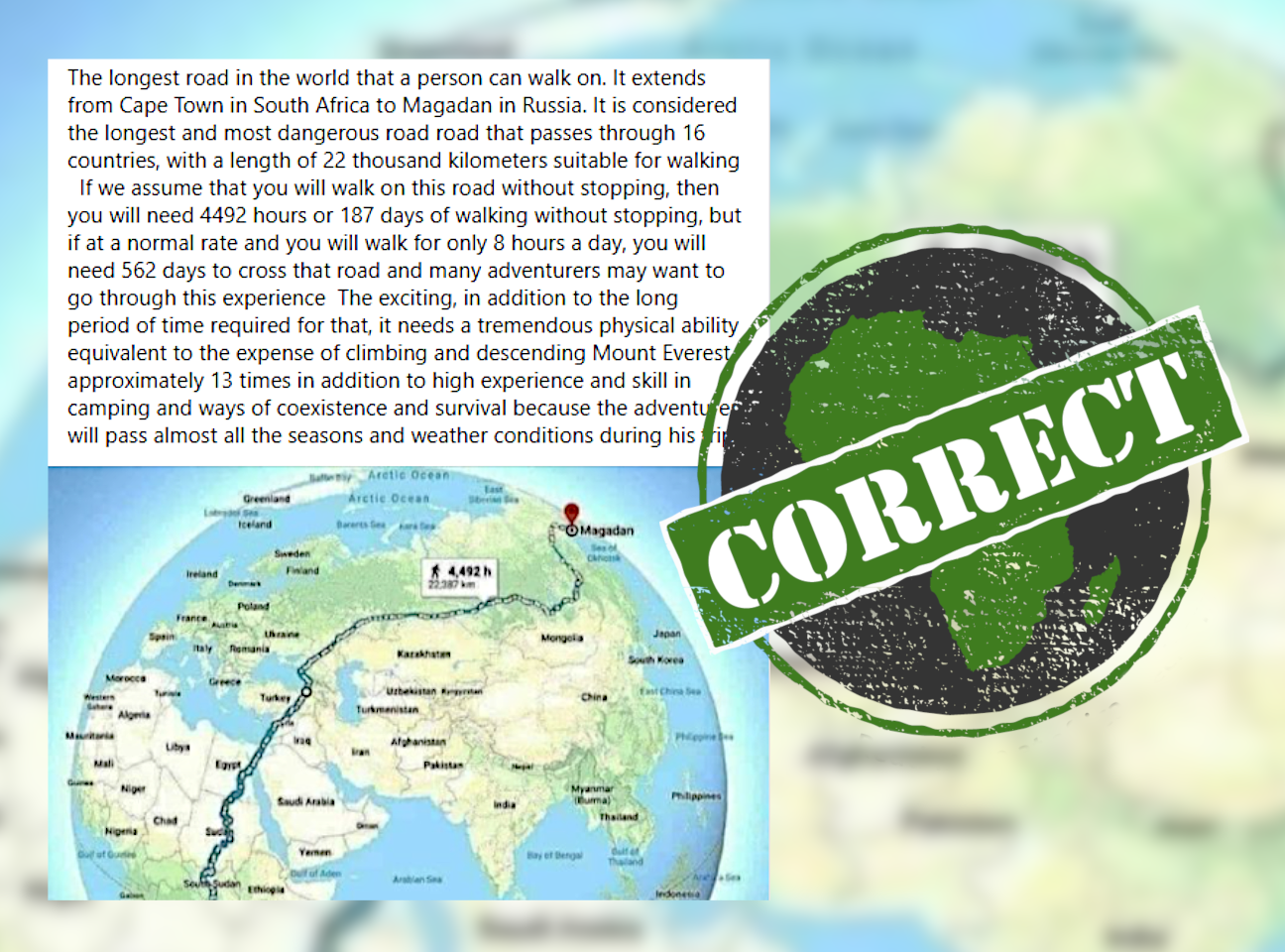 While the Facebook post doesn’t link to any sources, it’s a story widely reported by media across the world.

In the original caption, the user wrote: “21,212 km from Cape Town, South Africa to Vladivostok, Russia is the longest walking distance I've found on Google Maps. Over 14 months of walking at 10 hours a day through some of the most dangerous places in the world. Who's up for a hike?”

The post was upvoted 17,400 times, which increases a post’s visibility on the platform. A number of journalists and bloggers worldwide took their cue from the post and wrote stories based on it.

The website Brilliant Maps calculated that hiking the distance would be the “equivalent to 13 round trips up and down Everest”, one of the claims repeated in the popular Facebook post.

South African travel magazine Getaway pointed out: “To do this walk, you would need to travel through 16 countries, some of which are difficult to get into as a tourist and could mean passing through places known for civil war and unstable governments, including South Sudan and Syria.”

You can make the same calculations using Google Maps. We worked out a similar route to the one in the graphic on Facebook, slightly adjusting the automatically created route to avoid ferry crossings.

It’s questionable whether it’s a good idea, but you could walk from Cape Town to Magadan, Russia, and evidence suggests it’s the longest continuous road route on Earth.