COMMENT: How to produce evidence that’s useful - and used

A strong and capable state is central to the socio-economic development of any nation. Governments spend vast resources on policies and programmes aimed at improving the lives of their citizens. Here in South Africa, the government plans to spend R195 billion on human settlements and municipal infrastructure this financial year alone.

Government decision-makers who design these public policies, as much as citizens who pay for it through their taxes, hope they will achieve their desired positive impact. Unfortunately, all too often we simply don’t know whether a policy has achieved its intended impact or not.

For example, policies might be designed and implemented in such a way that it is unclear what exactly they are trying to achieve and how. And more frequently, relevant data and knowledge on policies’ impacts are not available.

The last problem - an absence of data and knowledge on policy impact - is a real problem for researchers. That’s what the Africa Centre for Evidence (ACE) aims to bridge.

What is the Africa Centre for Evidence?

ACE’s premise is that policy-relevant research - that is, research that is both useful for and used by decision-makers in government - has a large role to play in supporting social and economic development.

Our centre is hosted by the University of Johannesburg in South Africa and is made up by an international multi-disciplinary team under the directorship of Prof Ruth Stewart. It officially launched in January 2017.

ACE tries to encourage the production of research aimed at a relevant policy question and decision-making need. We then actively support decision-makers to use this research when designing and implementing public policies.

As for the production of policy-relevant research, we specialise in one particular kind: evidence synthesis. Evidence synthesis - including systematic reviews and evidence maps - is a research methodology that allows us to source, appraise and make recommendations based on a body of research evidence, rather than selected individual studies.

For decision-makers, evidence synthesis has the advantage that it brings together the totality of the available evidence on a policy question. This allows policies to be informed by the results of multiple research studies from different contexts and of different methodologies.

For example, we recently synthesised the evidence from 26 individual evaluations on the effects of governance structures in protected areas in Sub-Saharan Africa. The studies consistently showed that neither bottom-up structures such as community-based management, nor top-down structures such national administration, lead to a reduction in poverty. This combined finding allows for more trustworthy policy recommendations than any single evaluation on its own could have contributed.

The production of policy-relevant research is only one step towards evidence-informed policy-making. Equally important is supporting the use of this research by the policy-makers themselves.

In South Africa, we are fortunate to have an excellent institutional framework in the public sector that facilitates the use of evidence by public servants. As a result, ACE aims to collaborate with key government structures to support their ongoing efforts to integrate evidence into the policy process.

In our experience, such collaboration rests on two key mechanisms:

To build strong and trusted relationship and networks, ACE provides the secretariat to the Africa Evidence Network - a community of practice on evidence comprising over 1,000 African researchers and decision-makers interested in policy-relevant research.

We have also been invited to participate in co-production projects with a range of government departments and offer ongoing capacity support on evidence use and evidence synthesis. In this, ACE subscribes to a demand-led and problem-based approach to capacity-sharing between researchers and government officials.

Much left to do & learn

Research evidence has the power to change lives. In South Africa, evidence of the positive impacts of the national youth wage subsidy has led to the uptake of this labour market instrument.

At ACE, we have contributed to the design and production of an evidence map on human settlement policy led by South Africa’s department of monitoring and evaluation. The map then fed into discussions on the Human Settlements White paper. We have also seen our work being used in the training of civil servants in the UK, indicating the global relevance of the evidence movement.

Despite these, much is left to do and learn about supporting the use of research evidence to inform public policies in Africa. Without deliberate strategies, we risk producing research that does not meet decision-makers’ needs and therefore fails to be relevant.

Likewise, without direct efforts research that is produced - no matter how relevant - is more likely to gather dust on the long shelves of university libraries than to reach decision-makers’ desks.

The public sector in many Africa countries (ranging from Benin to Uganda, South Africa and more) is indeed a thought leader in this regard, inspiring researchers across the world to think more deeply on how to produce evidence that meets a public sector demand.

But, most importantly, it is crucial to continue building strong networks to support the institutionalisation of evidence-informed policy-making in Africa. Such evidence networks need to span all actors interested in the use of data and evidence to improve lives - from civil society organisations, research institutions, government bodies and practitioners, such as nurses and teachers.

Fortunately, the Africa Evidence Network’s Evidence 2018 conference in Pretoria from 25-28 September provides just such a space for all of us to meet. Only by working together can evidence-informed policy-making become a reality! 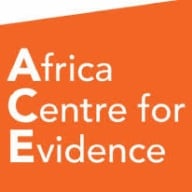