The image on the front page of the TimesLive news website was powerful. A car shrouded in black smoke burned furiously, flames licking out of smashed windows. The headline accompanying the photograph and an article about student protests in South Africa read: “18 cars set alight at Tshwane University of Technology”.

But there was something troubling about the photograph. The car looked a little too battered, even by the standards of many South African students. The caption offered little by way of explanation. “A car burns,” it stated, along with the photographer’s name, Feisal Omar.

TimesLive used the image again a few days later alongside a letter written by a South African education department spokesman decrying the Tshwane University protests. This time the caption casually referred to it as a “file photograph”.

A Google search using the keywords “Feisal Omar car burn”, turned up dozens of images of burning cars, gunmen, explosions and people desperately running for cover. None of them had been taken in South Africa.

The price of news 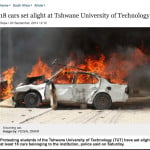 Finally, I found the original. It had nothing to do with students or demonstrations in South Africa. It was taken on 10 June 2011 outside the Hotel Madina in the Somali capital, Mogadishu, during violent protests in which two teenagers had been killed.

Omar, I discovered, was born in Somalia and had been working for the Reuters news agency since 2007. He is one of the brave handful of photographers and journalists still documenting the suicide bombings, gunbattles and bloodshed that are an all too terrible daily reality there.

Omar’s work has nearly cost him his life several times over. Once, while covering an advance by government forces against Al Shabaab militants, the car in front of him was ambushed. Five people including an army commander were killed. Omar was caught in the crossfire but survived. Despite this, he continues to take extraordinary risks to tell a largely untold story.

In South Africa, in the hands of an online editor hurriedly looking for an illustration to go with an article about burning cars, none of that mattered. Nor, it would seem, did the website’s readers.

In the context in which it was used, the image was a lie. Most people who glanced at the story probably thought it was a car burning at the Tshwane University of Technology. There was nothing to tell them otherwise.

Not an isolated incident 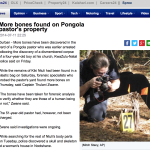 But the problem is far larger than a single story or a single website. All too often South Africa’s leading news websites use news images stripped of context as illustrations.

Take the story of a police investigation in Pongola in South Africa’s Kwazulu-Natal province, which News24 ran earlier this year. A pastor had been arrested after the dismembered corpse of a four-year-old boy was discovered in his church. “More bones found on Pongola pastor’s property,” read the headline. Alongside it was a photograph of a woman peering through a camera viewfinder at a wooden stump and a crime scene tag. There was no caption - just the photographer’s name, Mitch Stacy, and his agency, AP.

Like the burning car photo it had nothing remotely to do with the story or South Africa. In fact, the photo had been taken in November 2010 at a veterinary forensics seminar in Florida in the United States and showed Diane Robinson of the American Humane Association marking and photographing details of a staged wildlife crime scene.

A betrayal of trust

And just last week, TimesLive ran an article about a Durban man who had saved a passer-by from robbers and then collapsed and died. It was his “last act of heroism”, the website wrote. The story was accompanied by a dramatic photograph of an ambulance in heavy dust or fog, surrounded by a cluster of shadowy figures. “A hospital ambulance. File photo,” read the caption. The photographer was named as Danish Siddiqui.

The image, which has been used to illustrate other TimesLive articles, including a comment piece about ambulance drivers in South Africa, was actually taken in India’s capital, New Delhi, in December 2012.

It captured the moment an ambulance arrived at a crematorium in the city. Inside it was the corpse of a 23-year-old medical student who had died after being viciously gang-raped. Ironically, before appropriating the image as a one-size-fits-all illustration, TimesLive had actually used it in its proper context.

Distorting news images in this way demonstrates contempt for readers, betrays their trust and insults the efforts of photographers like Omar who try to tell incredibly difficult stories as accurately and honestly as they can. It is not news. It is fabrication.

Guide: How to spot fakes and hoaxes online