"There are no 'facts' in Africa"

The view from the 10th floor office of the University of the Witwatersrand, extends out over downtown Johannesburg. 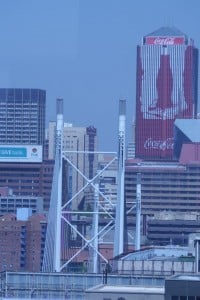 In the centre, stand the elegant arches of Nelson Mandela Bridge and, to their right, a busy commuter railway station. Beyond lies the heart of the city, long a troubled district but now said to be on the up. How many people live there? What do they do? Where do they come from? How many are South African citizens? How many are migrants?

I arrived in Johannesburg this month, on a visit from London, to work with the team editing this website from the offices at the university's respected journalism department.

When I told the driver who took me there that I was pretty new to the city but had visited once from Lagos, where I used to live, he first suggested I must have been crazy to live in Nigeria and then pronounced his own answer for the population figures for Johannesburg, where they come from and what they do.

"Well," he said. "You'll be at home in this Johannesburg. There are millions of your Nigerians here now. Millions. And crime? All the crime in Johannesburg is committed by Nigerians."

How did he know this? I asked. "It's known," he said. "Everybody knows it's all the Nigerians."

Having enjoyed the years I lived in Lagos, I felt more than a little offended for my Nigerian friends. And having lived in Europe, West Africa, the Balkans, and East Asia, I knew how dangerous such sentiments - that crime is always committed by foreigners - can be.


Since we won the initial funding, earlier this year, to set up and run this website, I have found a lot of people sceptical about whether fact-checking - now widely practised in the US and a growing movement in Europe - can in fact be carried out in Africa.

"There are no 'facts' in Africa" one so-called Africa expert told me in June.

His statement was, of course, ridiculous, as ridiculous, in fact, as the unfounded claim made by the driver.

But watching the  'live fact-checking' taking place now of speeches and debates in the current US presidential campaign, it is obvious that it will be harder to do Africa, be that here in South Africa now or elsewhere around the continent later on.

It is not that data does not exist. It does, and often in great quantities. And South Africa is one of the minority of African governments with Freedom of Information legislation that should allow us to gain access to it. But nevertheless, accessing that information is still harder than necessary and the quality of the data is not what always it should be.

So it will, I am sure, be a challenge.

Happily, I believe from the enthusiastic messages of support we have already had for the project, lots of people are interested in helping us to sort fact from fiction and hold the claims that people make up to scrutiny.

If that includes you, you're welcome aboard!