Were you fooled? The April Fools' Day gags that went viral

There is an art to writing a clever April Fools’ Day gag for a newspaper. So how did newspapers and websites in Southern Africa fare? With the help of our readers we have pulled together some of the best - and a few of the worst - April Fools’ Day news stories.

In Zimbabwe, the website Bulawayo24, got thousands of hits with a story reporting that MDC-T leader Morgan Tsvangirai had resigned as party president and quit active politics with immediate effect.

Malawi's Oracle Times reported that President Joyce Banda and her cabinet had approved the relocation of Lake Malawi from the east to west border with Zambia. The report said Banda had announced in the early hours of 1 April that Malawi preferred to share the lake with "reliable neighbour Zambia" rather than Tanzania which had set its eyes on hydrocarbons.

The Mail & Guardian newspaper - which broke the story in 2009 and has led the pack with many of the key revelations – carried an “exclusive” report describing how its reporters were given an “unexpected” official tour of the Nkandla homestead as a “gesture of transparency” by the president’s spin-doctor, Mac Maharaj.

“Over the next two hours, we were granted full access to the house, grounds and private living quarters of the president,” the newspaper reported. “The whole compound is off-grid and run from a mix of bio-energy from cow manure and hot air.

“We also walked down the subterranean tunnel connecting the helipad to house. As we padded down the soft carpets, knee-high lights with motion sensors lit up as we approached, and faded as we moved down the corridor. Furnishings in the official bedroom are plush, which is dominated by a custom-made king-size bed.” 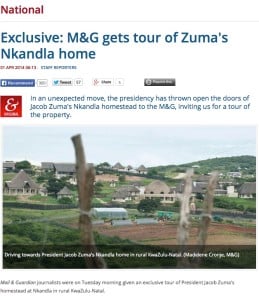 Similarly, the website iafrica.com reported that Nkandla would be opened to public tours.

South Africa’s main opposition, the Democratic Alliance, also got in on the act, issuing a tongue-in-cheek press release announcing that the Western Cape government would pay for a “multi-million rand upgrade of [DA leader and Western Cape Premier] Helen Zille’s private home in Rosebank, Cape Town”.

The press release quoted Western Cape Finance Minister, Alan Winde, saying that the initial upgrade was planned for about R20-million, adding  – in a reference to the costs incurred in upgrades to Zuma’s homestead -  “everyone knows that these things often run way over budget, so the Western Cape Government has set aside R246-million for inevitable cost overruns”.

The party also tweeted: “The ANC has responded to this news with outrage. ANC spokesperson Mr Jack Daniels Mthembu said that ‘there can only be one Number One’.”

The Sowetan newspaper website posted a “breaking news” alert stating that Zuma had abruptly resigned saying that “[d]ue to the recent Nkandla report, and various attacks towards me, I simply cannot defend myself any longer.”

The paper, clearly nervous about the reaction the story would get, unfortunately gave the game away with a note that read: “This is an April Fool's Joke. The President did not resign and he had not said any of the above. Have a great day further.” 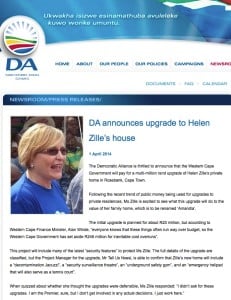 News24.com reported that Zille would be “moving into the township of Khayelitsha for the last two weeks before the 7 May elections”. There she would “live in a shack…surviving on a minimum wage and experiencing the controversial bucket toilet system”.

The Daily Sun tabloid carried the shocking revelation that the firebrand leader of the Economic Freedom Fighters, Julius Malema, had announced his “gracious acceptance” of a nomination to run for the presidency on behalf of the DA”.

Yahoo News South Africa set its sights on the leader of the opposition political party Agang SA, Mamphela Ramphele, reporting that she had announced she would change her name to Ngoxolo Ramphele because she wanted something that “would be easier for all South Africans to pronounce”.

The Daily Maverick website opted to take the mickey out South Africa’s state broadcaster, the SABC, Independent Newspapers, The New Age newspaper and the television channel ANN7. Both The New Age and ANN7 are owned by the politically well-connected Gupta family.

According to the Daily Maverick report, “the SABC, Independent News & Media and Gupta-owned The New Age/ANN7 are set to announce today that they are merging into one giant entity whose goal would be to, once and for all, tell the definitive truth about South Africa; day in, day out, on all media channels, until Jesus comes”. 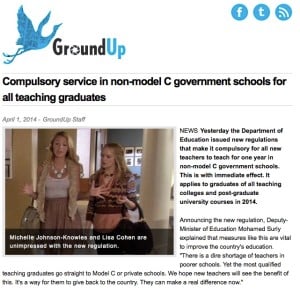 The Times focused on the controversy around e-tolls on major routes around South Africa’s Gauteng province and reported that motorists could avoid paying tolls by driving at exactly 113km/h.

Independent Newspapers decided to go for the ridiculous with its report that all buildings on Robben Island would be moved so that the island could be used exclusively to save the Western Cape Leopard Toad from extinction.

The Afrikaans Daily newspaper, Die Volksblad, also went with an animal theme, describing how scientists had bred a sheep with ferocious teeth capable of taking on predators.

And The Herald newspaper in Port Elizabeth decided to taunt readers who still hanker after the Eastern Cape province’s links to colonial Britain and enrage others with a report that a statue of Queen Victoria outside the city’s main library would be moved at a cost of R15-million.

Community journalism project, GroundUp, took on the education department with a report that new regulations had been implemented making it compulsory for all new teachers to teach for one year in non-model C government schools. "There is a dire shortage of teachers in poorer schools. Yet the most qualified teaching graduates go straight to Model C or private schools. We hope new teachers will see the benefit of this. It's a way for them to give back to the country. They can make a real difference now," the website quoted Deputy Education Minister “Mohamed Surly” saying.

Were you caught out? Are there April Fools' Day stories we missed. Tell us what you think...

Julian Rademeyer is the editor of Africa Check.