On 28 February 2015, voters in Lesotho turned out for legislative elections that were brought forward to restore stability to the southern African state after an attempted coup by the armed forces in August 2014.

The elections pitted the All Basotho Convention (ABC), under incumbent prime minister Tom Thabane, against 22 other parties, most prominent among them the Democratic Congress (DC), led by former prime minister Pakalitha Mosisili, and the Lesotho Congress for Democracy (LCD), led by the then deputy prime minister Mothetjoa Metsing.

It was an extraordinarily close election with Thabane's party taking 46 of the 120 national assembly seats. Mosisili's Democratic Congress gained 47 seats and announced that it was joining forces with several smaller opposition groups to form a coalition government.

This factsheet, which was originally published before the election, looks at the background to the polls and the key issues that drove the election. 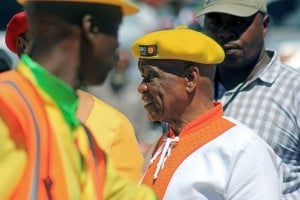 The timing of the decision was such that Thabane was able to circumvent a vote of no confidence in parliament: the LCD had threatened to withdraw from the ruling alliance, citing Thabane’s unilateral decision-making style, and join the opposition DC.

The LCD’s 26 parliamentary seats, together with the DC’s 48, would have given the new alliance a majority in the 120-seat National Assembly, leading to Thabane’s ousting and the formation of a new government.

At the time, South Africa expressed concern at increased military activity in the country, and a possible unconstitutional change of government.

Thabane subsequently relieved Tlali Kamoli, a Metsing loyalist, from his position as head of the armed forces, replacing him with Maaparankoe Mahao. The move brought the army, loyal to Kamoli, and police force, loyal to Thabane, into open confrontation.

On 30 August, Thabane fled the country, claiming Kamoli’s forces had attempted a coup. The military, in turn, claimed that it had simply acted against police officers who posed a threat to the stability of the country.

South African deputy president Cyril Ramaphosa, under the auspices of the Southern African Development Community (SADC), mediated a deal that saw parliament reinstated and an election set for a new legislature – and thus a new executive – in February 2015. 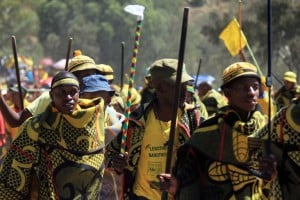 Supporters of Lesotho's All Basotho Convention (ABC) during the party's last campaign rally ahead of the elections. Photo: AFP/Hlompho Letsielo" />

Lesotho reformed its electoral system after post-election violence in 1998 that saw the deployment of the South African armed forces to the country. In that election, the ruling LCD won 79 of 80 parliamentary seats despite garnering only 60% of the popular vote as a result of the country’s single-candidate constituency-based system.

On polling day, voters in each of the country’s 80 constituencies cast a ballot for a party or independent candidate, with a single candidate elected to represent each constituency in the 120-seat National Assembly.

Because the prime minister is chosen from the ranks of parliament, he remains accountable – and vulnerable – to the legislature. A head of government drawn from a party with a parliamentary majority is powerful and secure in his seat as long as party loyalty prevails – a likely scenario in an electoral system where party members’ ambitions are reliant on party nomination and a party list system. The position of a prime minister beholden to a coalition is more tenuous: he may face a vote of no confidence if the coalition crumbles – as was the case in mid-2014.

According to the administering authority, the Independent Electoral Commission, there are 23 parties registered for the polls. However, the legislative election was a three-way race between Thabane’s ABC, Metsing’s LCD and Mosisili’s DC – without signs of there being an outright winner, said Charles Fogelman, a research fellow at the University of Illinois who focuses on Lesotho. 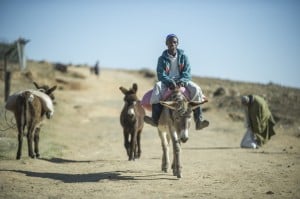 Lesotho is one of the least developed countries in the world and more than half the population live below the national poverty line. Photo: AFP/Mujahid Safodien" />

Socio-economically, not much has changed since the 2012 elections. Lesotho is ranked 162nd of 187 states on the 2014 Human Development Index and is classified as one of the least developed countries in the world. More than half of its citizens live below the national poverty line and average life expectancy is roughly 49 years. Little has changed in party policy platforms in the intervening years either, according to Motsamai.

There is little substantive difference between the three parties when it comes to the perennial issues facing the country – poverty, infrastructural issues, social security and service delivery. In part, this is the result of a shared political history, say Fogelman and John Aerni-Flessner, Lesotho specialist and assistant professor at Michigan State University’s Residential College in the Arts and Humanities: in 2006 the ABC split off from the LCD, as did the DC in 2012; all three organisations thus have their roots in the Basutoland Congress Party, which the LCD severed ties with in 2001.

In part, it is also an issue of credibility, says Dimpho Motsamai, a researcher at the Institute for Security Studies. With the LCD and ABC in coalition for two years, a radical shift in policy by either party would cast a shadow of political opportunism over it.

Party policy has also been vague. The ABC, for example, has promised a lot – poverty reduction, and increased farming yields and exports – but policy implementation is unclear, says Fogelman. “It’s one thing to make large pronouncements,” says Fogelman, “but another to build internal policies to get there.”

It’s a question of emphasis, says Motsamai. While the DC campaign is retrospective, focusing on achievements during Mosisili’s 15 years in power, the LCD is pushing infrastructure development, and the ABC is pursuing an anti-corruption agenda.

According to Aerni-Flessner, the corruption issue is one of the fault lines between the parties. The ABC’s focus on anti-corruption has led to investigations into various opposition politicians, including Metsing, Mosisili’s former finance minister, Timothy Thahane, and DC deputy Monyane Moleleki.

Thabane’s detractors have called the anti-corruption investigations a political witch-hunt, using the country’s court system to settle personal agendas. The perception is of a “targeted political hit job”. But the investigations are unlikely to hurt the DC and LCD campaigns: those who follow the investigation are more educated urban dwellers, not the two parties’ largely rural constituency, says Aerni-Flessner. 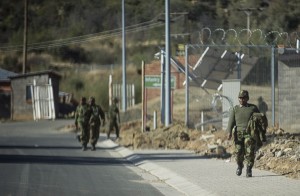 Soldiers outside an army barracks in Lesotho following an attempted coup in August 2014. Photo: AFP/Mujahid Safodien" />

A second polarising issue is that of the August attempted coup. According to Motsamai, each party is using the SADC intervention in order to mobilise support. The DC and LCD have been relatively successful in spinning the story that the crisis and SADC intervention – an embarrassment for Lesotho, in their eyes – stem from Thabane’s attempts to cling to power. The ABC, for its part, has played up the security aspect of the crisis and the threat the military posed to the security of the state.

There is truth to both claims, says Aerni-Flessner: evidence suggests that Thabane was using his position to retain his hold on power – but real violence also did take place. “So there is truth in the narrative, and in the counter-narrative of the security of the state being at stake.”

The problem is the division such narratives engender. “With each violent incident, the level of political rhetoric has been upped,” says Aerni-Flessner. “Whether it is leaders carrying cultural weapons or claims that the state is under threat, it is polarising people.”

The power of personality

According to Fogelman, personality is probably the most important factor for garnering votes in Lesotho politics. Mosisili proved this when he broke away from the LCD to form the DC ahead of the 2012 election. Though the largely rural LCD constituency continued to identify with the LCD, says Motsamai, support for Mosisili himself saw constituents vote for the DC, making it the largest party in parliament, with 48 of 120 seats against the ABC’s 30 and LCD’s 26.

Though an outright win for any party seems to be off the table, a coalition government will be difficult to negotiate in a political system where personality trumps policy. Thabane and Metsing are unlikely to reach agreement based on the June 2014 split in the ruling alliance; and Thabane and Mosisili are unlikely to find common ground given the 2006 LCD-ABC split.

Underlying tensions between Metsing and Mosisili may also undermine the most likely of coalitions, a LCD-DC alliance. In 2012 factionalism in the LCD saw Mosisili break away to form the DC. Metsing then formed an alliance with the ABC that ended Mosisili’s 15-year stint in office.

Fogelman says Metsing is working hard to cement his political power, evident in his role in bringing the ruling coalition to its knees in June. He has so far not committed himself to a formal coalition with the DC ahead of the election – a move that, he says, will ensure his party musters decent support on the proportional representation ticket. Metsing is likely to have a powerful position in a Mosisili government, but Aerni-Flessner says his eye is on the prime ministerial post – an ambition that will make for difficult power-sharing negotiations with Mosisili.

Yet Fogelman says Mosisili has had sufficient experience managing factionalism in his 15 years in power to maintain relative stability in a coalition: “If there’s one person who can keep [the factions] in check, it is Mosisili.” 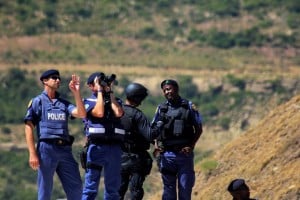 For Aerni-Flessner, it is not so much personality politics that is destabilising Lesotho, but the armed forces entering the fray. The new angle in Lesotho politics in the past six months has not been political instability, which is not new to the country, but the politicisation of the security forces. This unsettling influence will continue as long as factions in the armed forces work closely with political elements in the pursuit of particular agendas.

It is unlikely to spill over into violence – particularly in the event of a LCD-DC win, says Motsamai. Fogelman believes there is no real expectation of violence unless it is fomented by political leaders with inflammatory rhetoric.

Nonetheless, security has been bolstered in the country, with a complement of 475 police officers from SADC countries supporting local forces during the election. Leaders at a 20 February extraordinary meeting of heads of state and government of the SADC Double Troika also requested that additional police forces deploy from Angola, Botswana, Malawi, Mozambique, South Africa, Zambia, Zimbabwe, the DRC and Tanzania.

Aerni-Flessner believes there is no immediate threat of violence in the state: in addition to the international intervention, he says local political actors “will not get involved [in violence] when the eyes of the world are on them”. However, structural issues in the security forces may play out in violence in the medium- to long-term – particularly given the lack of attention paid to the problem by local politicians and SADC negotiators.

Shirley de Villiers is a doctoral candidate and lecturer in the Department of Political Sciences at the University of Pretoria.