Nigeria and China mark their golden jubilee of official relations in 2021, having established diplomatic ties in 1971.

And as trade and investment have grown, so has lending, leading to increased focus on the balance of the bilateral relationship. Nigerian president Muhammadu Buhari has at times had to deny that his country was too reliant on Chinese debt.

But the public debate about the level of Nigeria’s indebtedness to China, including claims that Abuja is risking its sovereignty, is one that is never too far from the limelight.

Our fact-sheet looks at the size of current debt.

In 2020 and the early months of 2021 federal government ministers pushed back at allegations, including from lawmakers, that because of increased borrowing, Nigeria was under Beijing’s thumb.

In August 2020, transport minister Rotimi Amaechi said Nigeria had waived immunity on a loan – immunity which would have prevented China taking it to arbitration in the event of a default – but this did not mean the country had ceded its sovereignty.

“We must learn to pay our debts and we are paying, and once you are paying, nobody will come and take any of your assets,” he said.

Justice minister Abubakar Malami supported Amaechi, saying the clause in question was standard and meant to protect lenders. The Chinese embassy in Nigeria also made a statement.

“Such a debate on loans is not the first time it will come up in Nigeria and other African countries. China will never seek hegemony and we are not out to take over any country,” a spokesperson from the embassy was quoted as saying.

What does Nigeria currently owe China?

As of December 2020, the most recent official data available, Nigeria’s public debt was N32.9 trillion, or US$86.3 billion. This is according to the country’s debt management office.

Of the external debt, 9.7% or N1.2 trillion ($3.3 billion) was owed to the Export-Import Bank of China. This is a state-owned and funded bank that supports China’s foreign trade and investment.

The debt to China formed 80.1% of bilateral debt, or $4.1 billion. Bilateral debt generally refers to debt loaned by one state to another state. Other countries that have lent to Nigeria are France, Japan, India and Germany.

Multilateral debt, or debt owed to international financial institutions such as the African Development Bank, the World Bank and the International Monetary Fund, stood at $17.9 billion.

The loans from China are concessional, which means they are given at more generous terms than market loans.

Eleven projects are funded by the money, according to the debt office. These range from water supply, power and railways to airport terminals, communications and agricultural processing.

“Those are all concessional loans and there are no reasons to be worried about them, they’re all project-tied which I think Nigeria should be happy about,” Patience Oniha, who heads the debt office, said in a February 2021 media interview. 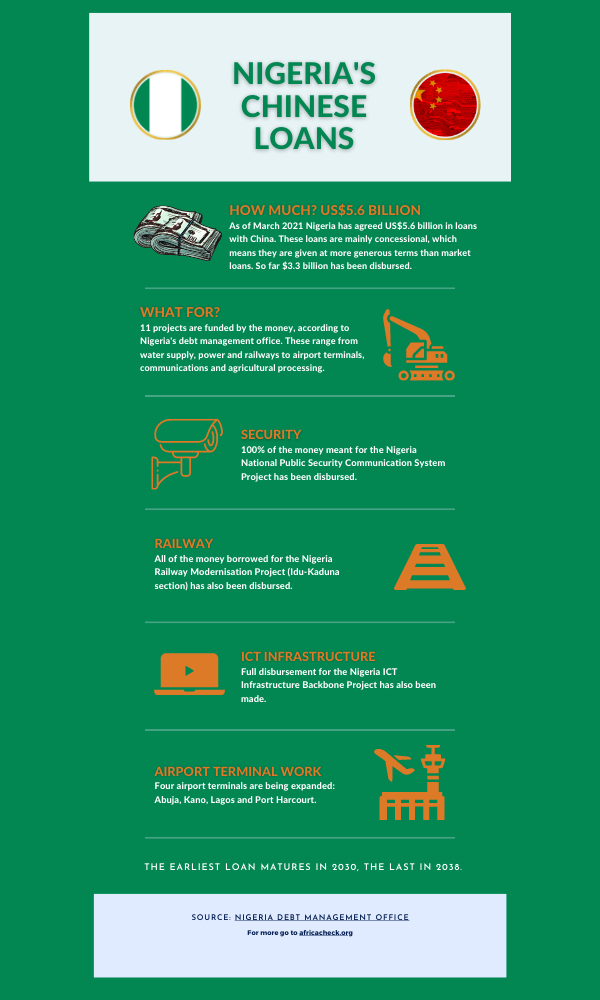 In total, Nigeria has agreed $5.6 billion in loans with China. But as of March 2020, Beijing had disbursed $3.3 billion. With Nigeria already servicing the loans, $3.1 billion was outstanding as of then.

The earliest of these funding agreements was signed in 2010, while the most recent dates back to May 2018. They all have interest rates of 2.5% per year, a grace period of seven years and a repayment period of about 20 years.

The earliest maturity date is September 2030, with the last loan to be paid up in March 2038.

External debt in that period also grew from $10.6 billion to $32 billion.

The debt management office has said the country would not default on its loans.

“Nigeria explicitly provides for debt service on its external and domestic debts in its annual budgets. In effect, this means that debt service is recognised and payment is planned for,” the office said in a 2020 statement.

“In addition, a number of the projects being and to be financed by the loans are either revenue generating or have the potential to generate revenue.”

In the February 2021 interview, Oniha of the debt office said the country could do “much better” on its debt service to revenue levels. “[But] so far, let’s be very clear that there has not been any default, whether of local or international debt.”

Not all debt bad

It is not accurate to judge a country’s debt and its ability to pay simply by how much has been borrowed, Joseph Ajibola, professor of monetary economics at Caleb University in Lagos, Nigeria, told Africa Check.

“The borrowing limits for any country depend on its condition, not on the debt-to-gross domestic product ratio or any other ratio. Developing countries with lots of opportunities for economic growth may have reasons to borrow much to fund the growth,” he said.

Ajibola said the consideration should be what the loan is used for.

“I really don’t have fears about Nigeria defaulting on China loans because they are project-targeted loans. It is bad when a government borrows for consumption: to import food, pay salaries or for administrative purposes.”

In February 2021 Nigeria said it had increased how much public debt it could incur, from 25% of its gross domestic product (GDP) to 40%.

The increase was meant to help fund budget deficits and other “obligations” of government. The debt office said the new debt-to-GDP ratio is “still well below the World Bank and IMF’s recommended threshold of 55% for countries in Nigeria’s peer group”.

For example, as at 31 December, Nigeria had a total of $1.41 billion of loans signed but yet to be disbursed by the Export-Import Bank of China. [The amount is made up of $1.05 billion, plus ¥2.3 billion, which converted to about$361.33 million in May 2018 when the agreement was signed.]

The debt increase might look sustainable on paper but in reality it could pose problems according to Matthew Odedokun, macro economics professor at Kwara State University in Ilorin, southwestern Nigeria.

A stress test that would “consider what would happen in case the country’s export and foreign exchange earnings drop significantly” was needed.

“How would the country carry on with debt servicing if the global oil market crashed?” Odedokun said.

In his view, the increased borrowing also meant future governments would be saddled with repaying debt rather than meeting their growth objectives.