FACTSHEET: Where do South Africa’s international migrants come from?


Africa Check publishes regular reports and factsheets relating to migration in southern Africa, from claims on asylum seekers and refugees to data on economic migrants.

In previous reports, experts have told us that accurate or precise information on migrant populations in South Africa is hard to obtain because of inadequate data collection systems and irregular migration patterns. Another reason is that both governments and non-governmental organisations have a vested interest in exaggerating immigrant numbers, either to justify stricter immigration controls or secure increased donor funding.

This perpetuates a situation where anecdote rather than data tends to make headlines – like claims broadcast by South African media stating that more than 1.5-million Zimbabweans live in South Africa, or that almost a third of Malawi’s population live and work in South Africa (if this was true, it would be a figure close to six million people!).

Anecdotal rhetoric may contribute to negative stereotypes around foreign-born migrants in South Africa and heighten fears that, for example, migrants are “stealing” South African jobs.

So, what do we know for sure – and where is “further research” required?


Most international migrants in SA come from SADC

Initial statistical reports from Statistics South Africa’s (Stats SA) 2016 Community Survey show that Zimbabwe, Mozambique, Lesotho, Malawi, Swaziland and Namibia were among the top 10 “sending countries” (countries of origin of migrants) in 2016, together with the United Kingdom, Democratic Republic of Congo, Nigeria and India.

Full statistical data for the 2016 survey has not yet been published, which means it is not possible at this time to accurately calculate total proportions of countries or regions of origin for this period. Such proportions – framed in terms of total international immigration into South Africa – may also cloud relevant demographic data about the sending country.

“While Zimbabwe and Mozambique are the largest [international migrants] by number, Lesotho is the highest by proportion; almost half of working age Basotho men work in South Africa,” said Professor Loren Landau, the South African research chair in mobility and the politics of difference at the University of the Witwatersrand’s African Centre for Migration and Society.


A 'history of labour migration'


According to a StatsSA report on migration dynamics, the consistently high rate of migration from SADC countries is due to a colonial and apartheid-era regional “history of labour migration, especially from Mozambique, Lesotho, Malawi, Zimbabwe and Swaziland.”

The same report adds that South Africa is regarded as an “important destination for many people who seek better socio-economic opportunities” due its relatively stable democratic government, good infrastructure and economic stability. According to StatsSA issues like political unrest, economic instability and even “environmental degradation” in the African region have resulted in increased numbers of displaced persons, increasing the number of both documented and undocumented migrants in South Africa and other middle- and high-income countries globally.

The United Nations Department of Economic and Social Affairs International Migration Report for 2013 indicates that the annual level of net immigration (net migration is the difference between immigration and emigration) for South Africa stood at 96,000 per year for the period between 1990 and 2000, and then rose dramatically to 247,000 annually between 2000 and 2010.


One of the reasons that it is hard to find total statistics on international migration is that undocumented migrants (those without the legal permission to be in the country, or who are in the country under a different permit than their intended or actual use) are likely less willing to participate in official surveys, and are possibly less likely to answer honestly, or respond to all the questions when they do participate. Dr Sally Peberdy, from the Southern African Migration Project (SAMP) network, currently based at the Gauteng City Region Observatory, told Africa Check that the number of just the undocumented migrants in South Africa could be anywhere between 1- and 2-million people.

Based on reports released by StatsSA, the profile of documented migrants entering South Africa – those who receive legal permits to work, study, live, receive medical treatment, do business, or even retire – shows several significant variations from the origin-profiles of the larger sample of all international migrants.

For example, the most recent Stats SA publication on documented immigrants in 2014, shows that the largest number – just over 66% – of 69,216 temporary residence permits (visas, including work and study permits) issued that year were issued to nationals from the following 10 countries:

Zimbabwe, Nigeria, India, China and Pakistan have comprised the top five sending countries for temporary residence visas for 2011, 2012, 2013 and 2014.

Unlike “all international migrants”, the sample of documented migrants who received temporary permits in 2014 showed that, while Africa still made up the single largest region of origin (52,5%), nationals from SADC countries (33,3%) and the Asian region (30,6%) made up a nearly equal proportion of successful permit applications. Similar proportions can be seen in the 2013 immigration documentation data.

According to StatsSA, in 2014 there were over 65,500 refugees and 230,000 asylum-seekers in South Africa. The major countries of origin for refugees were listed as being Somalia, the DRC, Angola and Ethiopia.

The documented migrant data shows us who is granted permission, annually, to reside in South Africa – but does not necessarily indicate total or cumulative international migrant population sizes, because it does not show us numbers or proportions of undocumented migrants.

Censuses and community surveys are important because they potentially gather cumulative (lifetime) data on both documented and undocumented migrants (with some limitations), while Stats SA’s reports on documented immigration only offer annual information about the latter group.


Survey numbers often do not match up


Several international organisations, such as the United Nations and the International Organisation for Migration, produce reports with migration data (either on all migrants, or only on asylum-seekers and refugees) on South Africa. These reports or data sets (many based on each other’s reports) also come with associated reporting and interpretive problems.

As in the accompanying factsheet on international migration demographics, there are significant differences in estimates by country of origin between StatsSA’s

2016 Community Survey and those estimated by the United Nations Department of Economic and Social Affairs (DESA).

The International Organisation for Migration, using Desa’s 2015 estimates, published an infographic showing migrants’ countries of origin. According to the infographic, there were 318,536 people from the United Kingdom living in South Africa – but the 2016 Community Survey only found 56,412.

The DESA report indicates that, for South Africa, the international migrant population includes both (what it defines as) “B” or foreign-born and “R” or refugees.

A representative of the migration section of the population division at DESA told Africa Check via email that it, for its inputs, it used the South African census 2011 data together with United Nations refugee numbers from 2014, and added both of these together. As countries like the United Kingdom are unlikely to be a major sending country for refugees, that category is unlikely to account for the discrepancy indicated in the table above. The vast difference between data sets suggests closer investigation of both is required.

Africa Check is in communication with StatsSA and demography researchers and will publish updated information on this as it becomes available.


Migration involves immigration and emigration – neither of which can be assumed to be voluntary. In addition to the immigration figures documented by StatsSA, the department of home affairs also documents a large number of deportations annually.


The department of home affairs captures information on international travellers entering and leaving through official ports of entry in South Africa. StatsSA publishes these as monthly tourism and migration reports. It should be noted that this data captures visits to South Africa rather than visitors (one person can enter South Africa more than once in the period for which statistics are reported).


Most foreign-born migrants live in Gauteng 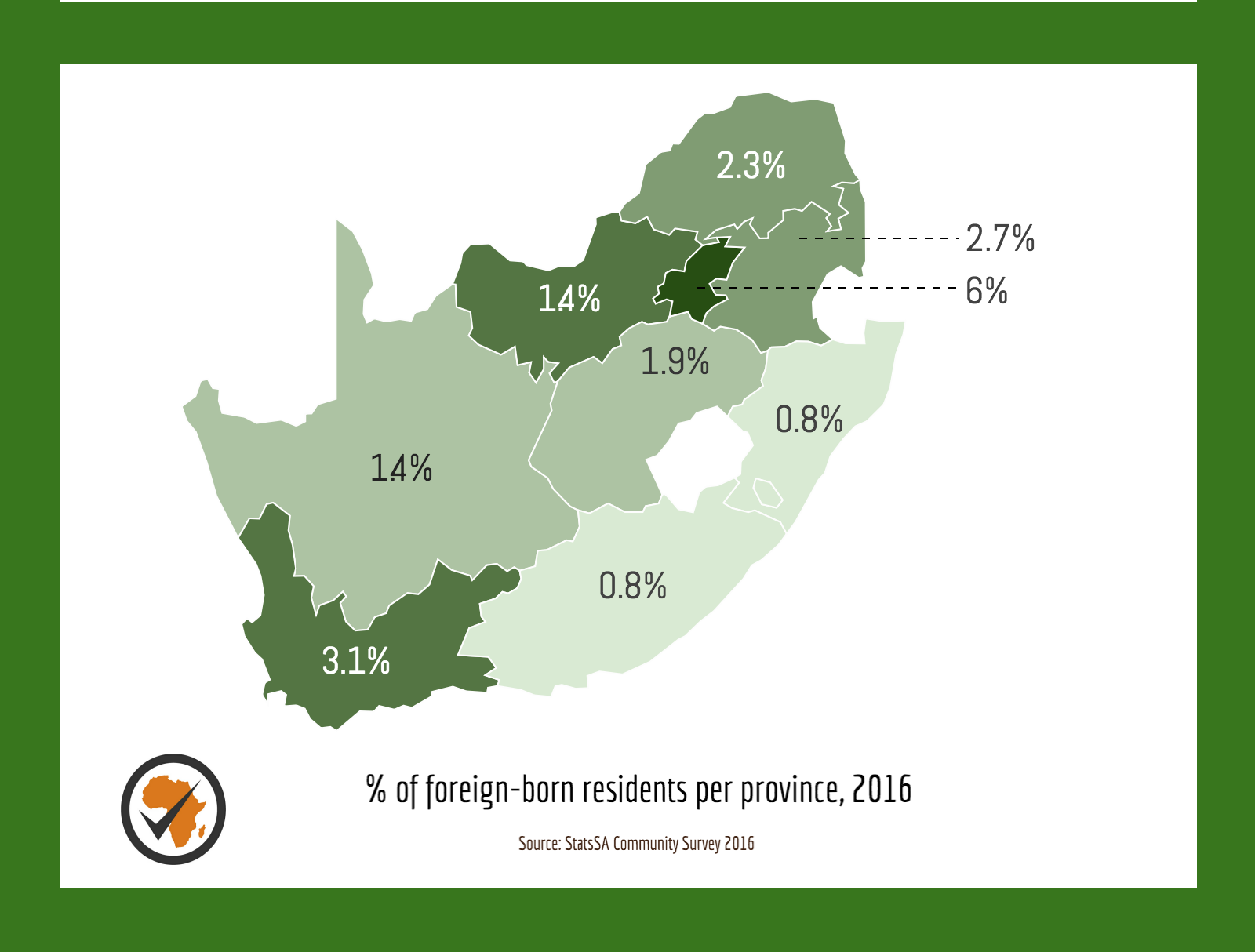 The number of foreign migrants per municipality within Gauteng varies quite substantially, with mining areas often showing higher proportions of international migrants. According to a 2013 report from the GCRO, in 2011 more than 17% of the population of Westonaria was foreign-born. In Merafong this figure stood at 12%. The foreign-born population in Johannesburg was calculated to be 13% of the total, and 10% in Midvaal. According to the GCRO all other municipalities in Gauteng had a foreign-born population of less than 10%.

StatsSA explains that international migrants preferring to settle in Limpopo, North West and Mpumalanga “may be as a result of similarity in cultural background, language as well as proximity to country of birth, e.g. Mozambique and Mpumalanga, Zimbabwe and Limpopo”, adding that a substantial number of immigrants in Limpopo and Mpumalanga work in low-skill positions, such as farm labourers.

It is worth noting that international migration – even to Gauteng – is still far lower than domestic migration from other provinces. At the time of the last census, 37% of people residing in Gauteng were South Africans born in other provinces.

Part one: How many international migrants are there in SA?