Big rock delivered from Dubai to Côte d’Ivoire instead of cars? No, another false claim about viral photo snapped in Malawi

Almost identical screenshots of Facebook posts, themselves doing the rounds on Facebook in the West African country of Côte d’Ivoire in December 2021, show three men in suits standing and staring at a huge rock inside an open shipping container.

“This morning at Abidjan port,” one caption reads. “They were waiting for two Toyota Corolla vehicles, bought online from Dubai.”

Another says: “This morning at Abidjan port, they were waiting for two Toyota VX bought online from Dubai and when they opened the container boom what they saw was beyond their imagination.”

Yet another, a Facebook machine translation, reads: “This morning at port of Abidjan. that they were waiting for two Toyota VX bought online from Dubai.”

Abidjan is Côte d’Ivoire’s main port and largest urban centre, lying on the coast of the Gulf of Guinea and Atlantic Ocean. Dubai is a wealthy city and emirate in western Asia’s United Arab Emirates.

But the photo has nothing to do with the city or any online order of Toyotas – as Africa Check has found before. 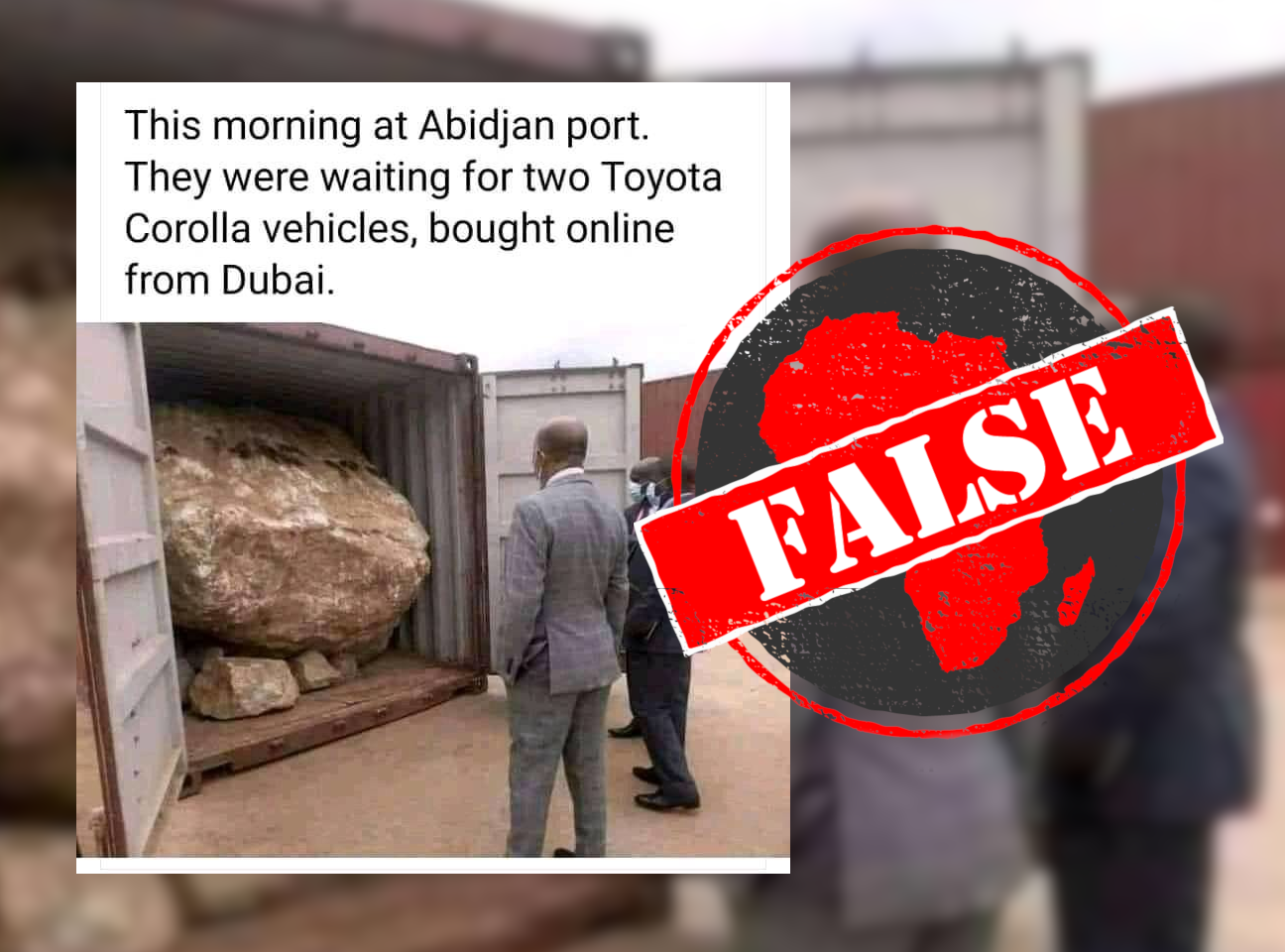 In March 2021 the photo was used as evidence that “the Malawian government ordered vaccine from Zimbabwe and a huge rock was delivered to them”. Several fact-checks, including ours, rated the claim as false.

And in the same month it appeared in another false claim that the three men are Ugandan officials.

Here the photo’s caption reads: “Its only in Uganda where you finish clearing your copper containers but only to find painted rocks, as in what are the procedures for clearing & determining rate of taxes?”

More recently, in early December, it appeared in a claim that used almost exactly that same wording, but located the port in Lagos, Nigeria. Lagos is Nigeria’s largest city, lying on the country’s coastline to the south.

“Yesterday morning at Lagos port,” the caption reads. “They were waiting for two Toyota Corolla vehicles, bought online from Dubai.”

The report includes a photo looking directly into the container, where the rock is supported by several smaller rocks.

“Minister of Mining, Rashid Gaffar, has stopped the export of a rose quartz mineral rock, weighing 25 tonnes, which officials from his ministry were selling at K2 million and had been earmarked for Asian market,” the Times says.

“Gaffar said he has stopped the sale because he was not satisfied with the reasons given by technocrats from his ministry who had pegged it at K2 million.”

Gaffar reportedly said he had heard “such rocks can fetch over K170 million”, or $211,277. “So, we will wait for experts to value the quality of the rock before it is sold.”

No confirmed case of coronavirus in Côte d’Ivoire, rest of Africa