Can eating and using various parts of the banana plant protect you against cancer, diabetes, HIV and a multitude of other afflictions?

Those are the claims made by a herbalist in a video watched over 82,000 times on Facebook. The video is captioned “Bananas is very good treatments and cure cancer HIV HIV yeast herpes virus diabetes high blood”.

In the video a man, who calls himself “the doctor of natural medicine” and “the greatest herbalist of all time” and claims to be from the Caribbean island of Trinidad, discusses the benefits of the banana plant.

He explains how to eat unripe green bananas, parts of the banana flower, and banana leaves, while standing next to a large banana palm and showing the camera different parts of the plant.

One of his most shocking assertions is that “the root and the stem of the banana can fight cancer, it can fight HIV”. He also claims that “no cancer or diabetes could attack the body” if you eat the “niploid” of the banana, or the dried bit at the end of the banana fruit.

While he gives no evidence for his claims, he says towards the end of the video that “no cancer can live in an alkaline body” and that the banana is “one of the most alkaline-forming food we have in the world”.

This is not the first time we’ve come across outrageous claims about the supposed benefits of the fruit and other parts of the banana. We’ve previously reported that there was no evidence that ripe bananas contained cancer-fighting proteins and that fresh banana leaves wouldn’t cure bedsores. We’ve also shown that the banana flower isn’t a “miracle food”.

But should these new claims about the banana be taken seriously? 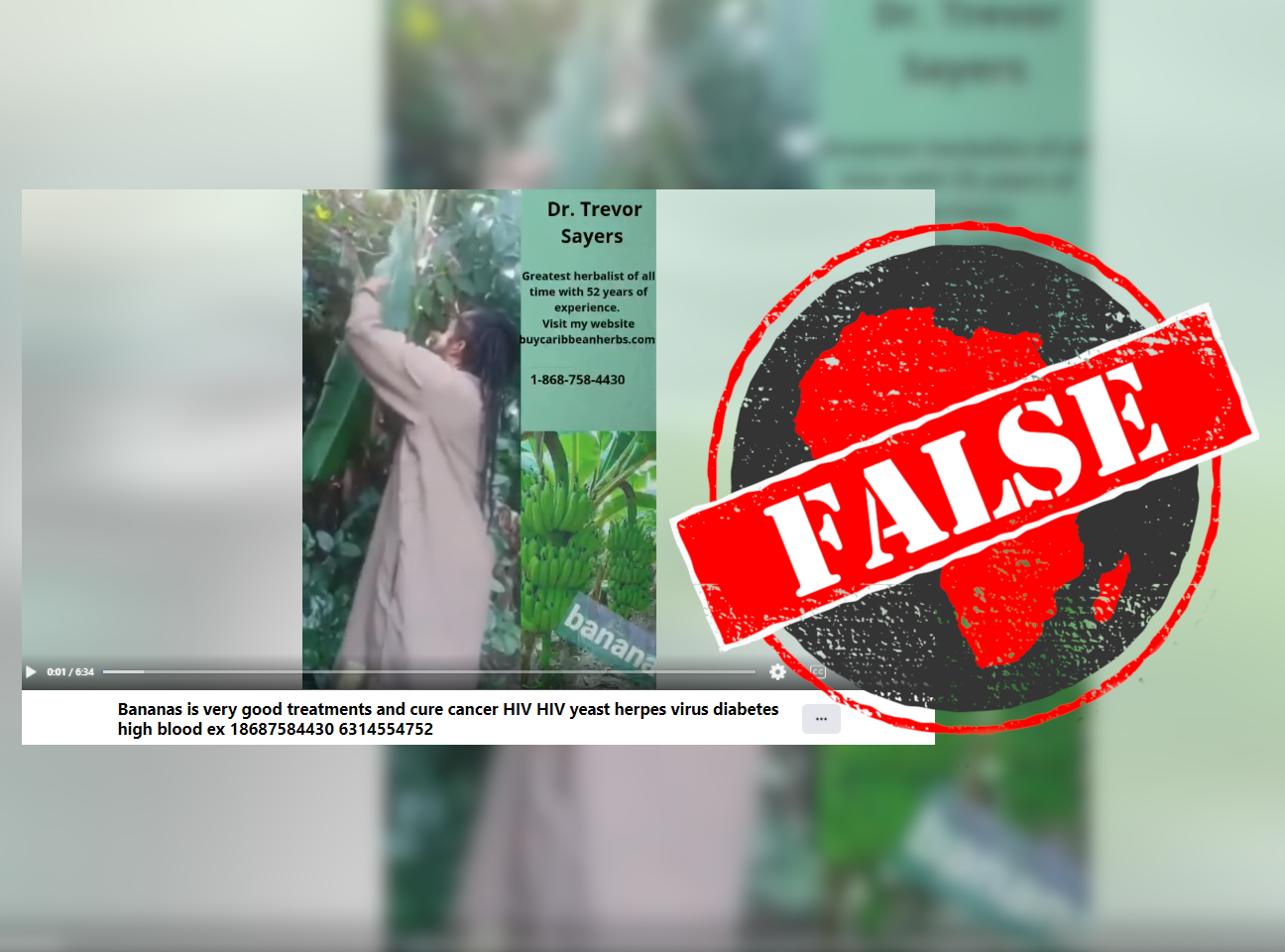 No proven links between cancers and alkaline foods

Let’s start with the claim that no cancer “can live in an alkaline body”. This is an old, thoroughly debunked myth and there is no link between an alkaline diet and preventing cancer.

As Africa Check has found previously, diet does not influence the body or blood’s pH level – the kidneys and lungs perform this function. You cannot alkalise the body by eating certain foods.

This is not to say health benefits might not be derived from the banana plant. One systematic review from 2021 found that “banana products and phytoconstituents show enormous potential for future development of drugs for cancer prevention and therapy”.

But this is not because of the acidity or alkalinity of the plant. As the review authors conclude, “more mechanistic studies and well-designed clinical trials should be performed to establish its efficacy”.

There is currently no evidence that eating any part of the banana either prevents or cures cancer. Cancer is the name given to a large number of diseases all characterised by the abnormal development of cells in the body. It is highly unlikely that one foodstuff or plant “fight any type of cancer”, as the herbalist claims.

No cure for HIV

If a plant as easy to grow and as widely available as the banana could “fight” HIV, it would make international headlines. And while the herbalist doesn’t go into detail about it, his claim that the root and stem of the banana “can fight HIV” is also false.

In 2010, over a decade ago, it was reported that a study had found a lectin found in the banana was “a potent inhibitor of HIV replication”. But this study suggested that the lectin BanLec might “become a less expensive new component of applied vaginal microbicides”, helping to prevent HIV infection during sexual intercourse. The study said nothing about the roots and leaves of the plant “fighting” HIV.

There is still no cure for the human immunodeficiency virus, or HIV, as we have reported as recently as September and October 2021.  With antiretroviral therapy, or ART, most people with HIV do not develop acquired immunodeficiency syndrome, or Aids, the term for the most advanced stages of HIV infection which in the past led to death.

As we’ve reported many times, medical experts agree that false rumours about cures for diseases such as HIV and cancer are potentially harmful.

Dr Skyler Johnson, former chief resident of therapeutic radiology at Yale School of Medicine in the US, has said that “every day patients are bombarded with false and exaggerated information via the internet or from well-meaning friends and family, promoting unproven treatments”.

This “advice” via video from Trinidad falls in the same category, and should be ignored.