Johannesburg has more than one working fire truck, although how many difficult to confirm

A number of posts on Facebook have shared news articles that claim South Africa’s largest city, Johannesburg, has only one working fire engine.

The articles are identical, one published on tech news site My Broadband and the other on News365. Both open: “Johannesburg, which promotes itself as a world class African city, has only one working fire truck.”

The claim seems to have first appeared in a 28 February article in Afrikaans-language newspaper Rapport. It quotes Wynand Engelbrecht, the former head of private firefighting company Fire Ops SA.

But does Johannesburg really only have one working fire truck? The answer is complicated. 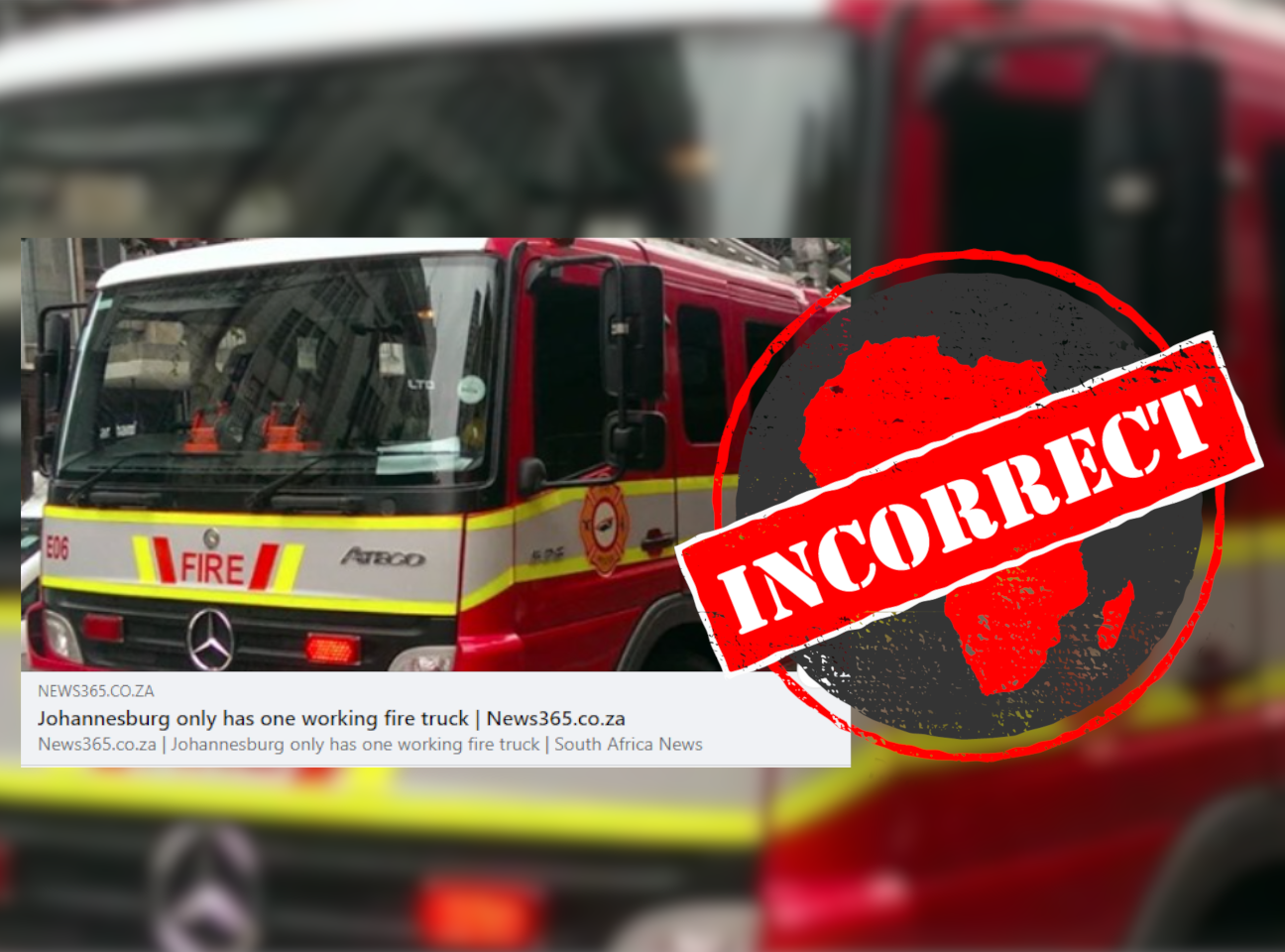 Robert Mulaudzi, spokesperson for the City of Johannesburg’s emergency services, told Rapport that the city had more than one working fire truck. He said the city usually had between seven and 11 working trucks.

But Engelbrecht told Rapport: “Daar is vyf. Drie staan permanent, een werk af en toe, wat beteken daar is net een wat permanent aan diens is.” This roughly translates as: “There are five. Three are permanently out of service, one works now and then, which means there is just one which is permanently on duty.”

Rapport claims that in comparison, Cape Town has bought 133 new fire trucks over the past two years.

According to the most recent data, from Statistics South Africa’s Community Survey in 2016, Johannesburg has a larger population than Cape Town, by approximately a million people.

When Africa Check contacted Mulaudzi, he claimed that Johannesburg is currently running five working fire engines, and claims that in the previous months the number “never went below four”.

A staff member at Lonehill station said its fire truck was actually used by several nearby stations because of the shortage of engines, though Alexandra station was not among them.

Both stations confirmed that their fire engines had been operating since at least January, so both would have been operational when the Rapport article was published.

City of Johannesburg does have fire engine shortage

The most recent available data released by the City of Johannesburg is in its report on the 2018/19 financial year. The report notes that in 2018/19 the city’s emergency services operated with about eight engines. These were distributed across the city’s six emergency services districts to ensure at least one per district.

In July 2019, under then executive mayor Herman Mashaba, the city announced that it would be buying several new emergency vehicles, which would “result in the 30 fire stations in the city each receiving a new fire engine”.

Mashaba admitted at the time that Johannesburg had only seven fire engines.

The city’s current executive mayor Geoff Makhubo said in February 2020 that the city had only five fire engines.

The claim that Johannesburg has only one fire truck has spread further in a graphic posted several times to Facebook and Twitter, comparing Johannesburg to Cape Town. According to the graphic, Cape Town has 64 fire trucks.

The graphic credits this to the “DA difference”. It is branded with the logo of the Democratic Alliance, or DA, South Africa’s main opposition party.

The DA governs the city of Cape Town, whereas the ruling African National Congress is in the majority in the city of Johannesburg.

Is Johannesburg the most radioactive city in the world?

South African advocacy groups have claimed Johannesburg is the most radioactive city on Earth, because of the mining of uranium-rich gold fi...

48,000 potholes on Johannesburg’s roads? That’s not nearly the whole story

ANALYSIS: Can we tell which African cities have the most polluted air?

Dakar and Joburg were near the top of a Twitter post listing world cities with the worst air quality. But how is the air pollution of differ...