No, you can’t cure cancer with diet and supplements

“The devastating effects of chemotherapy MAY be irreversible, so the less chemo you’ve been through, the better.”

This is the stark warning on a graphic published to Facebook on 23 May 2022 headed “How To Cure Cancer”.  It lists three diet rules to follow for six weeks.

The first rule is “No meat”, followed by “Organic food only (plenty of fruits and vegetables)”. The third rule gives two options: either “1.5 grams of Laetrile (vitamin B17) per day (by mouth)” or “1 gram of hemp oil per day (by mouth)”.

At the bottom of the graphic, a disclaimer in tiny font reads: “The preceding text was written by someone who has no medical licence and should not be listened to at all.”

But social media users commenting on and sharing the graphic appear to be treating its contents as factual.

So can any of these dietary measures actually cure cancer ? 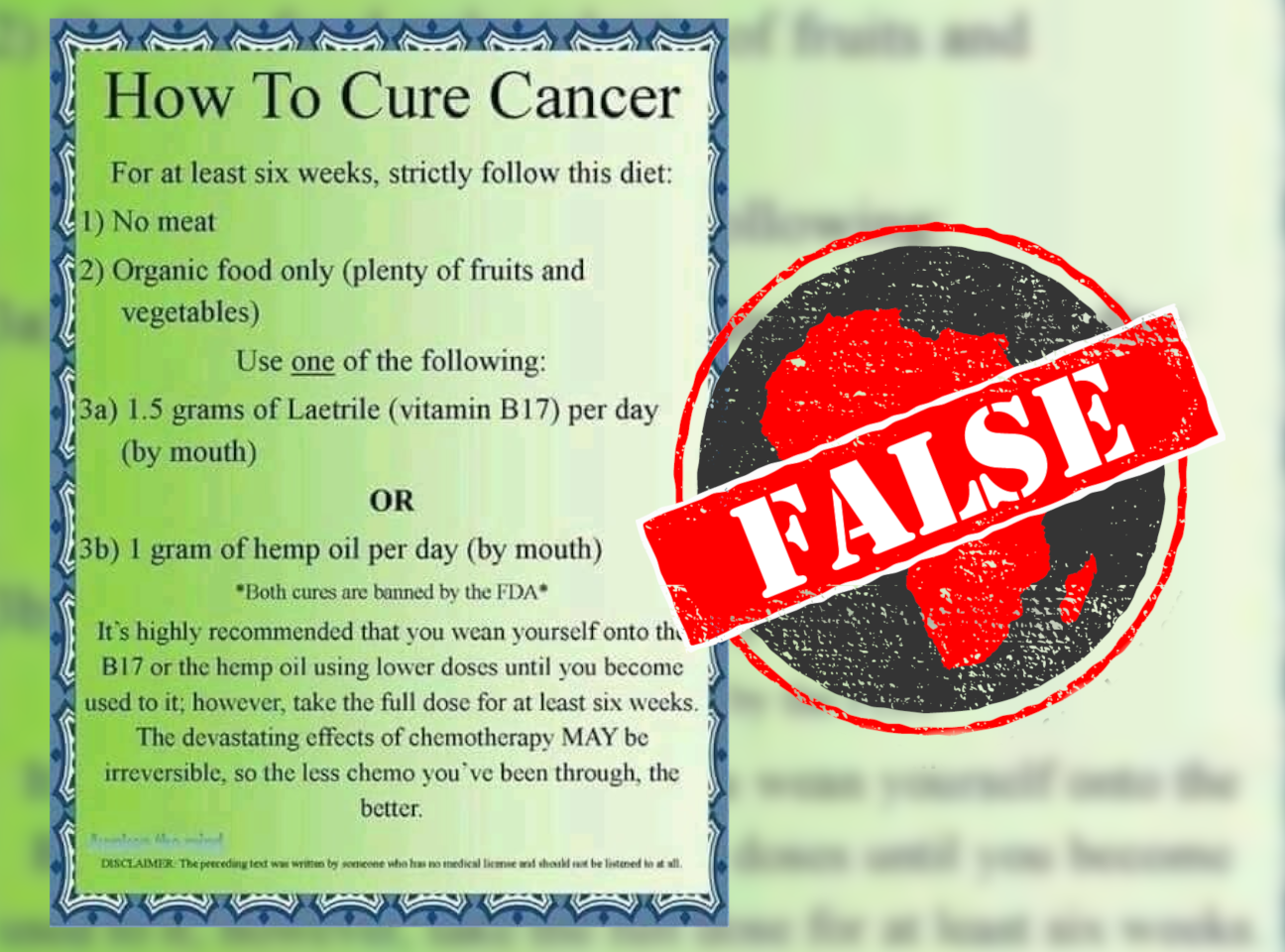 ‘No diet, superfood, vitamin, or drink can cure cancer’, though diet may prevent certain types

Cancer is a large group of diseases. There are more than 200 different types of cancer, but any one of these is usually a result of years of damage to cells, caused by a combination of factors.

Unfortunately, there is no good research that suggests any specific change in diet can cure cancer. As the University of Texas Medical Center has definitively said: “There is no diet, superfood, vitamin, or drink that can cure cancer.”

Prevention of disease is sometimes equated with treatment by the layperson. While dietary changes can’t cure cancers, there is good evidence that some dietary habits can lower your chances of developing certain types of cancer.

Research suggests that plant-based foods, which are often rich in fibre and phytochemicals, may protect the body’s cells from damage, lowering the risk of cancer. Plant-based diets often also contain fewer calories, which is also associated with reduced cancer risk.

The World Cancer Research Fund is an organisation that continually evaluates the body of cancer research and makes recommendations based on the best evidence available.

The fund recommends limiting red and processed meat, and eating more fruits and vegetables. But unlike the advice in the graphic, this is to prevent, not cure, cancer.

Hemp oil is often sold as a health supplement, and comes from the seeds of hemp, a type of cannabis plant. It contains various fatty acids, including omega-3 and -6, as well as some vitamins, and small amounts of cannabinoids.

Some studies have looked into the ways various cannabinoids interact with cancer cells. This early research seems promising and shows that some of these compounds might have anti-cancer properties, but the research is still in the early stages.

Another reason to be cautious is that hemp seeds contain very little tetrahydrocannabinol (THC), one of the two compounds often studied in this kind of research.

There is not enough data to suggest cannabinoids can treat cancer in humans.

The  graphic also suggests taking “vitamin B17”, or laetrile. Also known as amygdalin, laetrile is found in some nuts, vegetables, beans and fruit pips.

Africa Check previously looked into amygdalin and its link to cancer. In short, this substance is not actually a vitamin, but classified as an irritant. The claim that amygdalin can treat cancer is false, and has been debunked for decades.

Using amygdalin as a treatment for cancer can also be dangerous. It contains cyanide, a powerful poison that can result in death. According to UK-based Macmillan Cancer Support, people have suffered cyanide poisoning and some have even died as a result of taking amygdalin.

The bottom line? A healthy diet has many benefits for physical and mental health, and may help prevent some types of cancer. But no diet or supplement has been shown to cure cancer.

Cancer patients should speak to their doctor before making any major changes to their diet.