Are conservationists dyeing elephant tusks and rhino horns pink? No – photos have been digitally altered

“One of the best things I’ve seen in awhile,” starts the text on a graphic posted on Facebook on 15 August 2022.

There are two photos in the graphic, one of an elephant and the other of a rhinoceros. The elephant’s tusks and the rhino’s horn are bright pink.

“They use the same pink dye that is attached to stolen bank notes. This makes the ivory unsellable, and it cannot be consumed. The animals are not harmed and it is saving their lives,” the rest of the text above the photos reads.

Rhino and elephant populations across Africa are threatened by poachers who target them for their tusks and horns.

(Note: Elephant tusks are made out of dentine, known as ivory, and are the animal’s upper incisor teeth. They do not grow back. A rhino’s horn is not ivory, but made of keratin, like human hair and fingernails, and does regenerate.)

The World Wildlife Fund estimates that 20,000 elephants are killed each year across the continent by poachers.

But are conservationists dyeing rhino horns and elephant tusks pink in order to deter poachers? And are these real photos of animals with their extremities dyed? We checked. 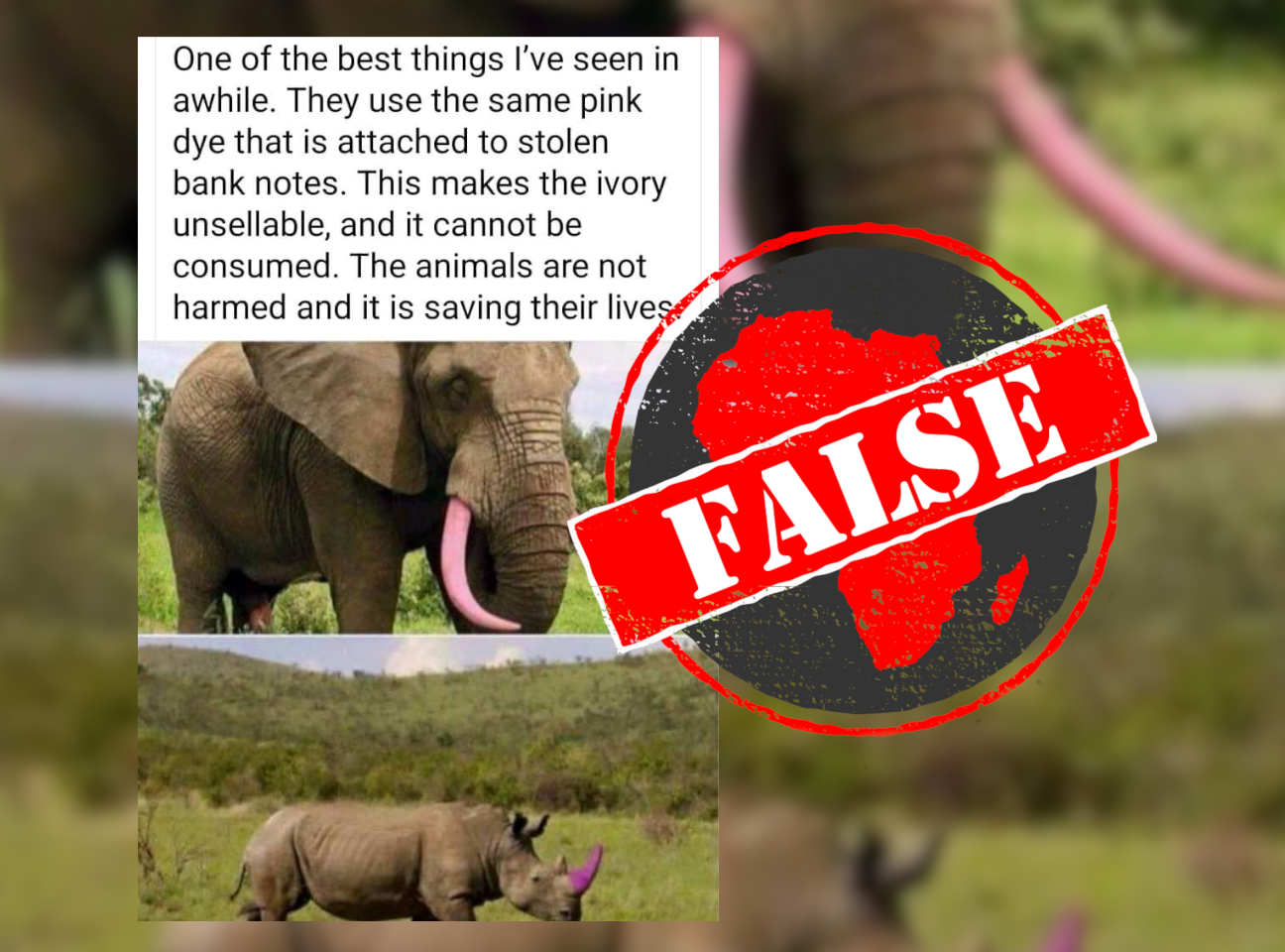 Photos have been digitally altered

A reverse image search revealed that both photos have been altered.

The elephant photo has been used since at least 2009 and was included in an article titled Elephant Facts for Kids. In the original photo the elephant’s tusks are the usual off-white colour.

The rhino photo is a stock image available on Getty Images, a website that stores high quality photographs which can be licensed for use. In the original photo the rhino’s horn is also the usual brownish grey.

Some conservationists do treat animal tusks and horns to devalue them and discourage poaching. But they don’t dye horns or tusks bright pink.

The South Africa-based Rhino Rescue Project infuses rhino horns with a compound made up of “ectoparasiticides and indelible dye”. This contaminates the horn which makes it unsuitable for decorative or medicinal purposes.

The treatment is not toxic to birds who might ingest it but if a person consumes a treated horn, it could lead to nausea, vomiting and convulsions.

On the organisation’s frequently asked questions page they say the treatment does not turn horns pink.

“Rhino horns are not stained pink on their surface for two primary reasons: The colour would not be visible for long enough to act as a deterrent, as the animals groom their horns down and wallow in mud on a daily basis,” the organisation says.

“Visibly discolouring horns makes every other animal in a population without a coloured horn an even softer target for poachers.”

They also warn against sharing digitally altered images of rhinos with bright pink horns as they create “unrealistic expectations” of what the treatment does. They say it may result in rhino horn consumers thinking that if the horn is not pink it hasn’t been treated.

And the International Fund for Animal Welfare says that dyeing elephant tusks and rhino horns to deter poaching is “not sustainable”. This is because of how quickly both grow.

“Within three years, a rhino can regenerate its entire horn. Elephant’s tusks can grow as fast as an inch [2.54 centimetres] per year,” the website says.

“The dye would grow out and re-dying each and every animal every few years is unrealistic.”

So no, conservationists are not dyeing rhino and elephant horns bright pink to deter poaching. Photos of elephants and rhinos with bright pink tusks and horns have been digitally altered.