IN SHORT: South Africans love a double-cab bakkie, and posts on Facebook promising free Toyota Hiluxes have had enthusiastic responses. But they’re scams, more interested in your personal details than in making your year.

The posts promise social media users the chance to win a Toyota Hilux pick-up truck. Not much is required to win the vehicle, apparently, other than writing in the comments section or “signing up” on a separate website.

The utility vehicle is popular in South Africa, where it’s known as a bakkie. Many of the responses to the posts are South African.

The posts are usually not left active for long, but deleted after a few days – unlikely behaviour from a genuine business and a sign that all is not well. While this made it more difficult to keep track of what was afoot, we took a closer look. 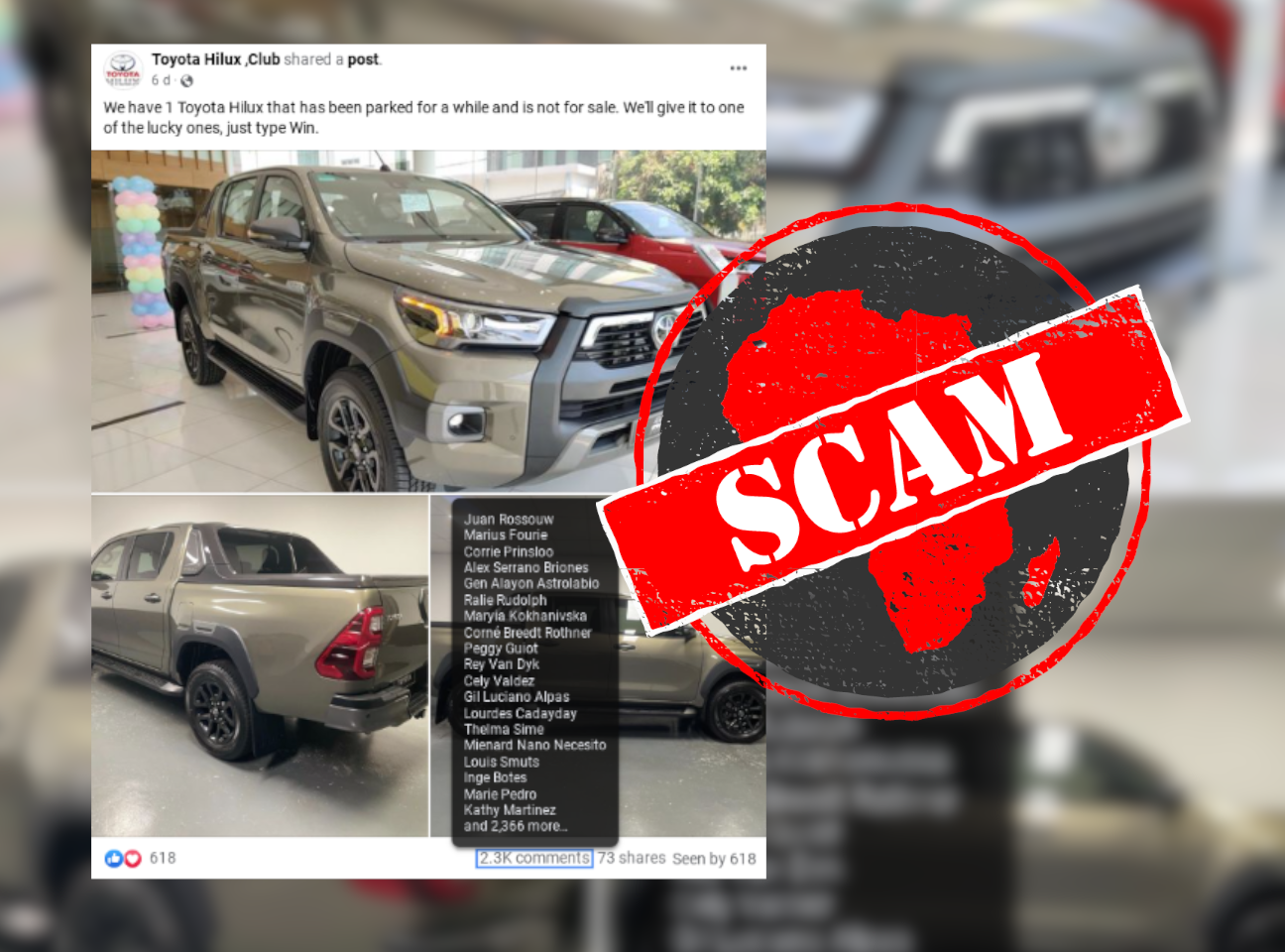 Posts and groups deleted, no signs of real businesses

The group that first came to our attention has been deleted. It claimed to be a “car dealership”, but gave no details of where it was located or how to contact it.

This is more or less the format of all the posts we’ve seen – the claim that a vehicle has “been parked for awhile” and is now being given away. But neither the posts nor the Facebook pages give any details of where these vehicles are located or how they would be delivered to the winners. There are no contact details listed for the supposed car dealerships. 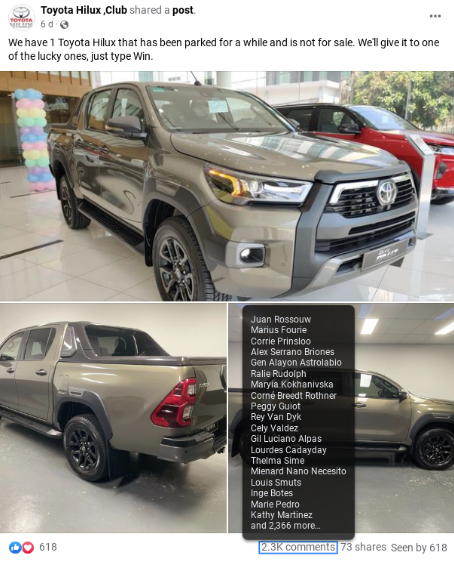 Some Facebook users have also grown suspicious, commenting that the posts are a “scam” or pointedly asking who the most recent winner was.

Unlikely details add up to confusion

All the groups we saw have Indonesia, a country in Southeast Asia, listed as the primary location for the people who manage them. South Africans commenting on the posts are still encouraged to “enter”, which is suspicious. It seems highly unlikely a competition would be open across such a large geographical area.

When we took a closer look at the Facebook profiles of the people managing and posting on these pages and groups, they all appeared to have little activity on Facebook other than posting similar competitions or giveaways across similar accounts.

A Facebook “fan page” going by the same name publishes slightly different posts. Here the photo and name of a lucky winner is posted, with the claim that there are “still” one or two vehicles left to win, to someone who answers in the comments.

One photo shows people at a car dealership wearing rugby shirts of the Springboks, the South African national rugby team, and the other features a woman with a typically South African name. But this “fan page” is also “managed” by people in Indonesia. A reverse image search of both photos only led to similar posts shared on Facebook, and not to any identifiable individual or car dealership.

Two of the pages have a “sign up” button, which lead to websites outside of Facebook. Here readers are encouraged to “register” or “s’inscrire” – French for “register”. However, if you click on the links apparently for this purpose, they redirect into an infinite loop, back to the same page.

Be wary of the collection of personal information

It’s not entirely clear what the scam is here, but we’re convinced that no one commenting on these posts is winning a Toyota Hilux.

One of the sceptical Facebook users may come close to the truth, writing in a comment that it is “probably an operation to collect personal data for ulterior purpose such as to resell packaged date, identity theft, phishing, access to email accounts etc”.

The posts appear to be classic engagement bait – posts that ask people to interact by liking, commenting or sharing. The more people do this, the greater the Facebook page’s reach. Meta is aware of the tactic and is taking active steps to fight it.

Both of the external websites feature ads for Compliance Sweepstakes Services. This may mean that the pages are monetised and earning advertising revenue.

Be careful of Facebook pages asking you to comment on posts or for personal contact details. Whatever the racket, there is no evidence that anyone has won a Toyota Hilux or that any of these give-away vehicles exist.