“One of the most effective ways to heal stomach ulcers naturally is to drink cabbage juice regularly for three weeks,” a man in the video says.

He says this is because it “has high levels of glucoraphanin which turns readily into sulforaphane in the body, helping to reduce inflammation and speed up the healing process”.

Glucoraphanin is a natural chemical found in glucosinolate plants such as broccoli and cabbage, which have various bitter sulphur-containing glycosides. According to Merriam-Webster, sulforaphane is thought to help with the production of enzymes in the body which could then detoxify cancer-causing substances.

The man in the video ends by saying: “It is supported by clinical research.”

Other instances of similar claims are doing the rounds on Facebook.

“Cabbage: One of the most effective foods used to treat ulcers, cleanse the liver and stop inflammation,” one graphic reads.

Another post says “cabbage and cabbage juice - the miracle cure for ulcers”.

So is cabbage juice the miracle cure for ulcers? We asked an expert. 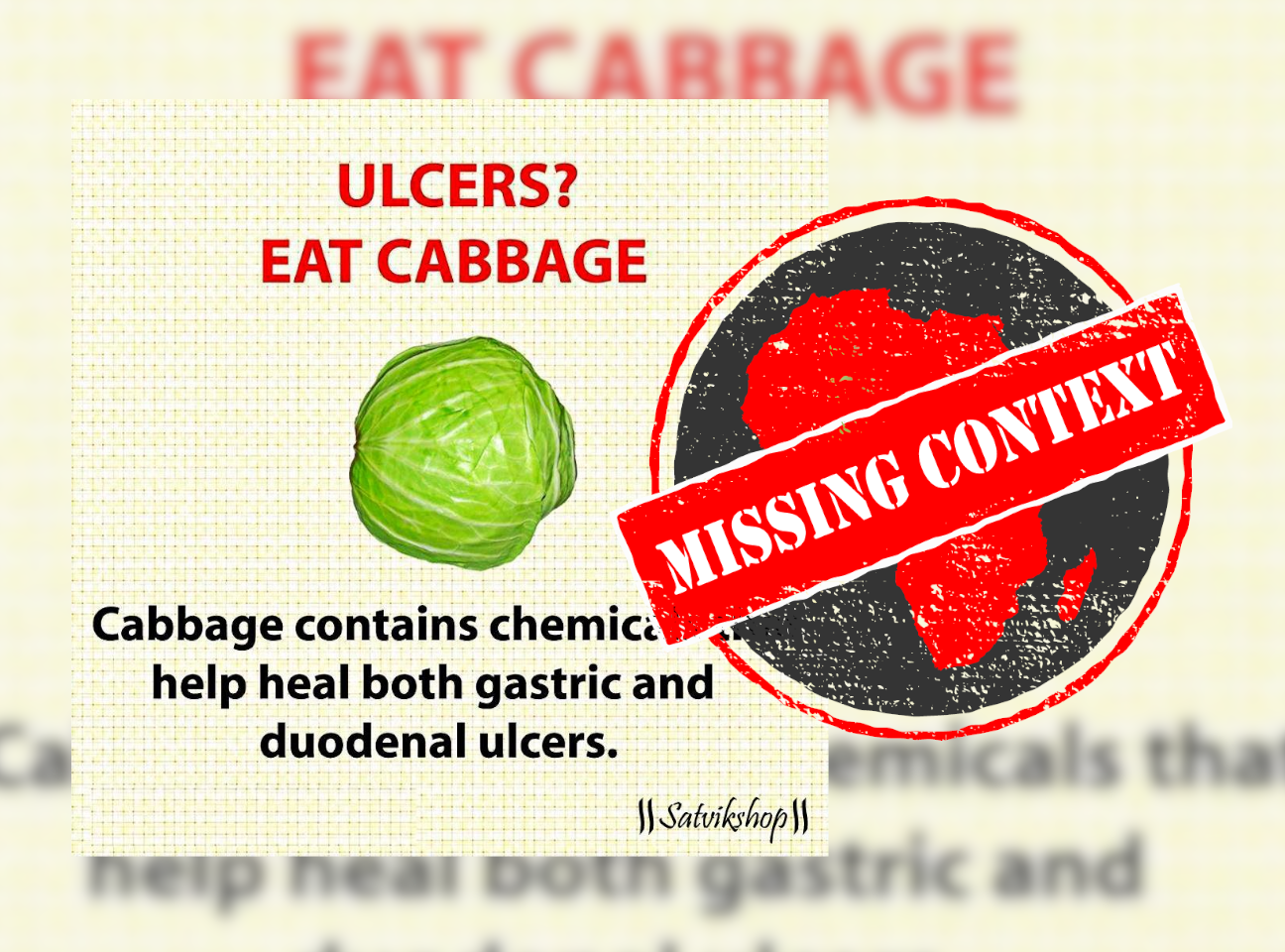 An outdated study from 1949 gave 13 patients cabbage juice to help heal their ulcers. The research found that the plant may have had an antipeptic ulcer factor which could have prevented the development of histamine-induced peptic ulcers.

Peptic ulcers are small open sores which develop on the inside lining of the stomach as well as the upper part of the small intestine, says the Mayo Clinic.

The conclusion of the study found that the cabbage juice did indicate that the antipeptic ulcer dietary factor could possibly play an important role in helping heal peptic ulcers in people.

A 2014 study, while referencing other older outdated studies, concluded that the specific vitamin in cabbage juice (vitamin U) was effective in promoting the healing of uncomplicated peptic ulcers.

But the standardised medication treatment for stomach ulcers depends on their cause.

For example, the UK’s National Health Service (NHS) says antibiotics may be needed if the ulcer is caused by bacteria. But if the cause is long-term use of medication like nonsteroidal anti-inflammatory drugs, then proton pump inhibitors (PPIs) are needed.

PPIs reduce the amount of acid the stomach produces, which then prevents further damage to the ulcer as it heals naturally, says the NHS.

But which would be better for ulcers, medication or cabbage juice? We asked an expert.

Dr Kay Karlsson, medical gastroenterologist and director of the endoscopy unit at Wits Donald Gordon Medical Centre in South Africa, said most of the literature on cabbage juice and ulcers was from the 1940s and 1950s, “well before the drugs we have available today were around”.

Karlsson said these studies used almost a litre of cabbage juice daily, which was “a huge amount and likely to make people very gassy and uncomfortable”.

Karlsson recommended, with most studies being outdated, that it was “far better to take the drugs that we have as we know that they are highly effective with minimal side effects".