Deworming no cure for period pain – and could cause unnecessary harm

People have even taken to Facebook to discourage the use of painkillers for period pain.

One post reads: “How many Felvin, Buscopan, Paracetamol, Ibuprofen etc have you taken this year already to alleviate period cramps? These drugs have side effect that may cause harm to your reproductive system including suppressing ovulation. That reminds me … When last did you deworm?”

Is deworming a better solution for period pain than painkillers? And do the painkillers listed suppress ovulation? We took a closer look. 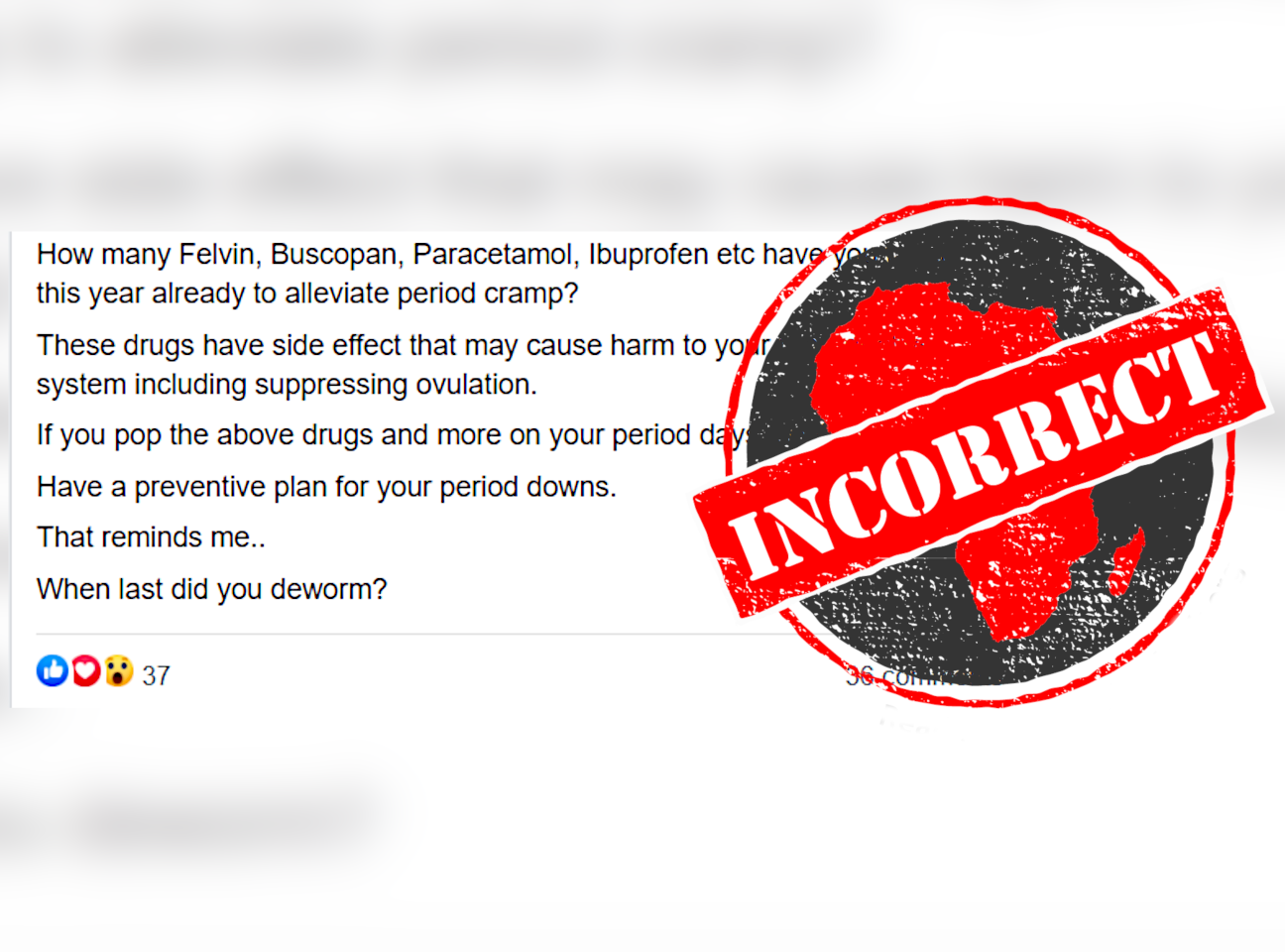 Period pain – menstrual cramps – is  pain in the lower abdomen just before and during women’s menstrual periods. The pain is usually caused by the chemical prostaglandin, which causes the uterus to contract slightly to expel menstrual blood.

Dr Onche Samuel Malyot, a consultant gynaecologist obstetrician with Bee Hess Special Hospital in Lagos, Nigeria, told Africa Check that the painkillers mentioned in the Facebook post are all non-steroidal anti-inflammatory drugs, or NSAIDs, except for paracetamol, also known as acetaminophen.

He said NSAIDs have no effect on ovulation.

According to the German Institute for Quality and Efficiency in Health Care, NSAIDs such as ibuprofen and diclofenac can relieve period pain.

The US-based Mayo Clinic and Cleveland Clinic, both prominent medical research centres, also recommend over the counter pain relievers, like ibuprofen, as best for period pain.

In contrast, deworming medications or anthelmintics target parasitic worms in the body.

Malyot said worms were unlikely to invade the uterus.

“Worms are typically found in the intestine and in the muscle tissue,” he said. “Dewormers have never been shown to treat menstrual pain. I wouldn’t recommend anyone take dewormers for period cramps.”

Kay Anyachor, a community pharmacist in Gwarimpa municipality in Abuja, Nigeria, said that the major deworming drug administered in Africa is albendazole. When used for purposes other than deworming, such as that suggested in the Facebook post, worm medicines can have side effects.

“Albendazole is not an NSAID and does not have anti-inflammatory, analgesic properties. But dewormers are teratogenic, which means they can harm a foetus in the early stages of pregnancy.”

The World Health Organization advises that anthelmintic medicines like dewormers must not be given to pregnant women during the first three months of pregnancy. Deworming medication will not relieve menstrual cramps, but can have serious side-effects.