We get it – you love your coffee. But can you really down “even 25 cups” of the brew every day, at no risk to your heart?

That’s the claim in a Facebook post shared in South Africa, energising social media users to flag it to the platform’s fact-checking system as possibly false.

The post links to a June 2019 article on the Mind Unleashed, a website that seeks to inspire “out-of-the-box thinking”. The article is headlined: “Even 25 cups of coffee a day won’t harm your heart, new study shows.”

The study, the article says, “contradicts previous research pinning the blame on coffee for the stiffening of arteries, heart pressure, and increased likelihood of stroke or heart attack”.

Coffee drinkers now “have no reason whatsoever to trim their consumption”, it adds. The website encourages readers not to take its word for it and “question everything”. 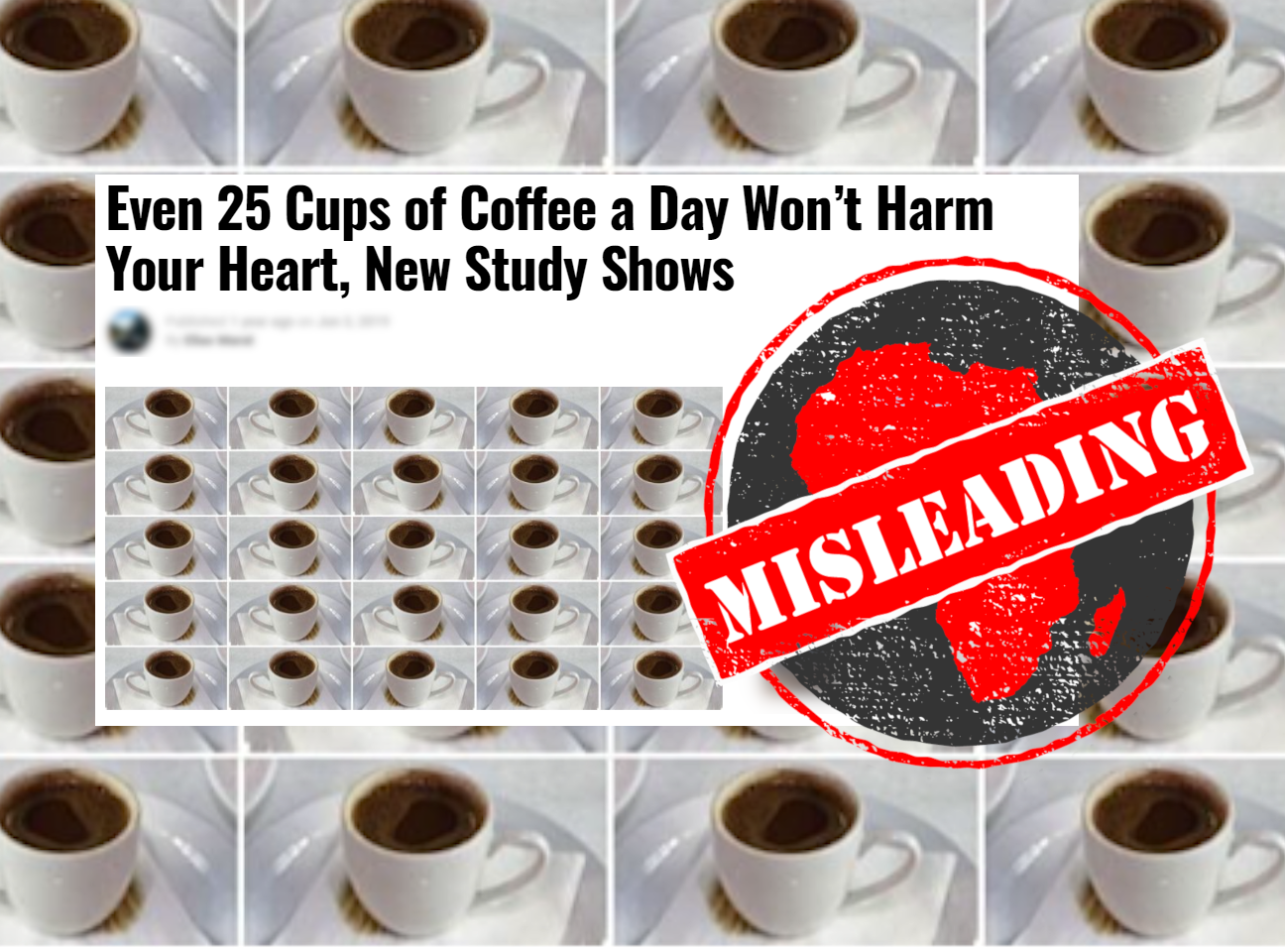 The article links to the website of the British Heart Foundation (BHF), a UK-registered charity that funds research into heart and circulatory diseases. The charity says it partly funded the study, which was done by researchers at the Queen Mary University of London.

The research found that “drinking coffee, including in people who drink up to 25 cups a day, is not associated with having stiffer arteries” as “some previous studies would suggest”.

Stiff arteries can increase the heart’s workload and, so, the chances of a heart attack or stroke, the organisation says. Other credible health information sources agree.

“This news story was reported in a misleading way by quite a few media outlets at the time,” Amelia Komor, a BHF spokesperson, told us.

The heart foundation later published a follow up article that clarified their findings, titled: “Is it really safe to drink 25 cups of coffee a day?”

The study did not show that copious amounts of coffee had no effect on the heart, as widely reported. Instead, it only measured one aspect of arterial health – artery stiffness.

“It didn’t look at other risks such as abnormal heart rhythms or cholesterol levels – which have both been linked to high coffee consumption in the past.”

The focus on 25 cups, which was variously framed as “even” or “up to” was also misleading, the charity said.

The study in question had 8,412 participants from the UK, placed in three categories:

The study excluded those with heart or circulatory disease and those who took more than 25 cups a day. In the event, only two of the total participants drank that much coffee - and they were included in the group that took more than three cups.

Lastly, the foundation said, while their study might have revealed an association (or a relationship) between taking coffee and stiffness in arteries, it was not designed to find a “cause and effect” relationship.

We asked a number of experts about the headline in question and the study’s findings.

The headline “is incorrect and does not reflect the data”, Prof Frank Hu said. He is the chair of the department of nutrition at the Harvard T.H. Chan School of Public Health.

Hu said that according to the study, only a few people drank 25 cups of coffee every day. Such a high level of intake would not represent the likely consumption levels in the population.
Dr Ahmed El-Sohemy is a professor at the department of nutritional sciences at the University of Toronto.

He concurred with Hu. “The claim that drinking up to 25 cups of coffee per day is safe for your heart, is a completely misleading headline,” he told Africa Check. “Importantly, the study being cited does not even support that.”

Tamara Kredo is a senior specialist scientist at Cochrane South Africa. This is a research unit of the South African Medical Research Council that works to provide reliable evidence on healthcare to policy makers and the public.

Kredo said the study as designed could establish associations, but would not be able to draw direct causal links between coffee consumed and the health outcomes.

“It is one thing to say that coffee doesn’t affect the stiffness of your blood vessels, but another to comment on other health related issues that caffeine may cause.”

‘Coffee not as bad as thought’

The headline of the British Heart Foundation’s original article publicising the study can also be faulted. It reads: “Coffee not as bad for heart and circulatory system as previously thought”.

Arterial stiffness is not the only way by which caffeine or coffee can influence cardiovascular disease, El-Sohemy said.

The foundation’s associate medical director, Prof Metin Avkiran, was more specific, saying that the research ruled out “one of the potential detrimental effects of coffee on our arteries”.

After we queried it, the organisation changed the article headline to “Coffee not as bad for your arteries as previously thought”.

Difference in how each person processes caffeine

What of the study itself?

El-Sohemy, who has studied the effects of coffee on health, said that a major limitation of the study was “that they did not take into account individual genetic differences”.

He said some of his research had shown that four cups of coffee a day had no effect on people who metabolise caffeine fast. This is consistent with the study supported by the UK charity.

But his research did find that the risk of a heart attack increased in those who metabolise caffeine slowly.

Kredo said that the best evidence about whether a treatment or intervention works or has an effect on the body would be to design a trial comparing one group who receives the intervention with another group which does not.

“This minimises bias in knowing whether the effect was by chance or not. However, designing studies for commonly consumed goods, such as coffee, is very difficult given how they are in common use.

“This study used an appropriate approach to try to understand the link with coffee intake and one biological marker, arterial stiffness.”

So, after all this, should you guzzle your cup of joe with no fear, or should you not risk it all? After the first few cups it’s probably not worth reaching for the coffee pot.

Said Harvard’s Prof Hu: “Previous studies have shown that moderate consumption (three to six cups a day, or an eight ounce portion size)” – that’s about 230 millilitres – “may reduce the risk of heart disease, but there is no additional benefit when consumption is further increased.”

A moderate consumption of coffee could be incorporated into a healthy lifestyle, Hu said. But “it is also important to watch the amount of sugar and cream added”. – Lee Mwiti