Family member who collapsed during burial, not suspected Covid-19 victim who ‘resurrected’

“Man suspected to have died of Corona 'resurrects' and rushed to hospital as he was about to be buried in Kericho!” That’s the description of a four-minute video posted on Facebook in Kenya on 24 August 2020. It’s also been shared on WhatsApp.

The footage shows four people dressed from head to toe in blue protective suits attending to another person, also in protective gear, who is lying motionless on the ground. A coffin can be seen in the background.

A man in a white lab coat then gives instructions as the four try to remove the suit from the unconscious person. Someone is heard saying: “Legeza mshipi”. That means “Loosen the belt” in Kiswahili.

The video pans to a crowd silently watching the incident. It ends with the man being carried away by two of the suited people.

Does the video show a Covid-19 patient who revived during his burial? We checked. 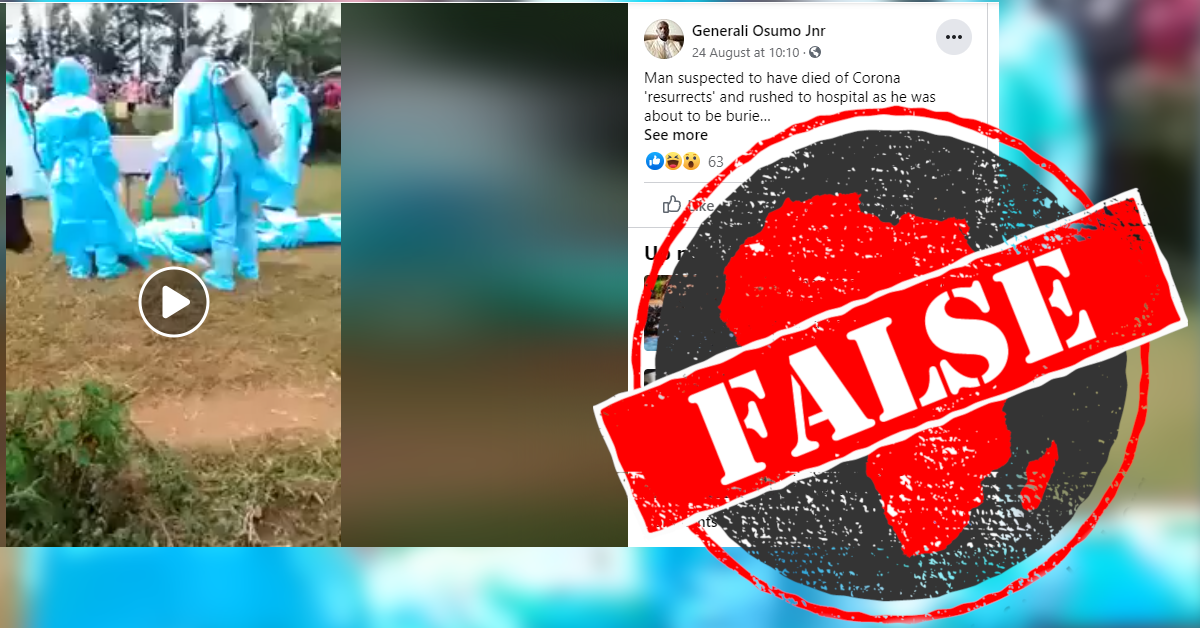 The health ministry’s guidelines for handling the bodies of patients who have died from Covid-19 are that the body must be placed in a body bag made of “PVC, leak proof and tamper proof material and buried as soon as possible”.

If the unconscious man had been a Covid-19 patient who was pronounced dead, the people around him would have been ripping off a body bag – not a protective suit.

Africa Check put the word out through its contacts to find out if anyone had seen the video and if they knew the circumstances surrounding it. A lead put the location in Bomet county.

We contacted the county’s director of communication Ezra Kirui to find out exactly where and when the video was shot.

“This happened in Chesoen village which is in Bomet Central sub-county on 13 August 2020,” he said.

“The man who had lost consciousness is a relative to the deceased who had been allowed to be part of the burial.”

The guidelines require a family representative to be part of the body disposal team. – Grace Gichuhi