A video of what appears to be worms nestled inside a banana has been widely shared on WhatsApp and Facebook, including in South Africa, with the warning that eating them could lead to brain death.

In the video, which is labelled “regardez bien avant de manger”, French for “take a good look before you eat”, a man splits open a banana in a bunch and proceeds to extract what looks like a white worm.

He again digs into the banana’s flesh with a pair of tweezers and extracts a longer worm, all the time commenting in French in a conspiratorial-sounding low-pitched whisper.

It is difficult to tell if both worms are alive, or if they are worms at all, as they do not wriggle or show any other sign of life.

The caption to the video urges users to share it as widely as possible. It claims that “recently, 500 tonnes of bananas from Somalia arrived in the markets, which contain a worm called Helicobacter that releases poisonous bananas in the stomach”.

It says symptoms include diarrhea, vomiting, nausea and headache. And after 12 hours the person will die from “brain death”.

It encourages people to inspect any bananas they buy or to avoid eating them altogether. But are these claims true? 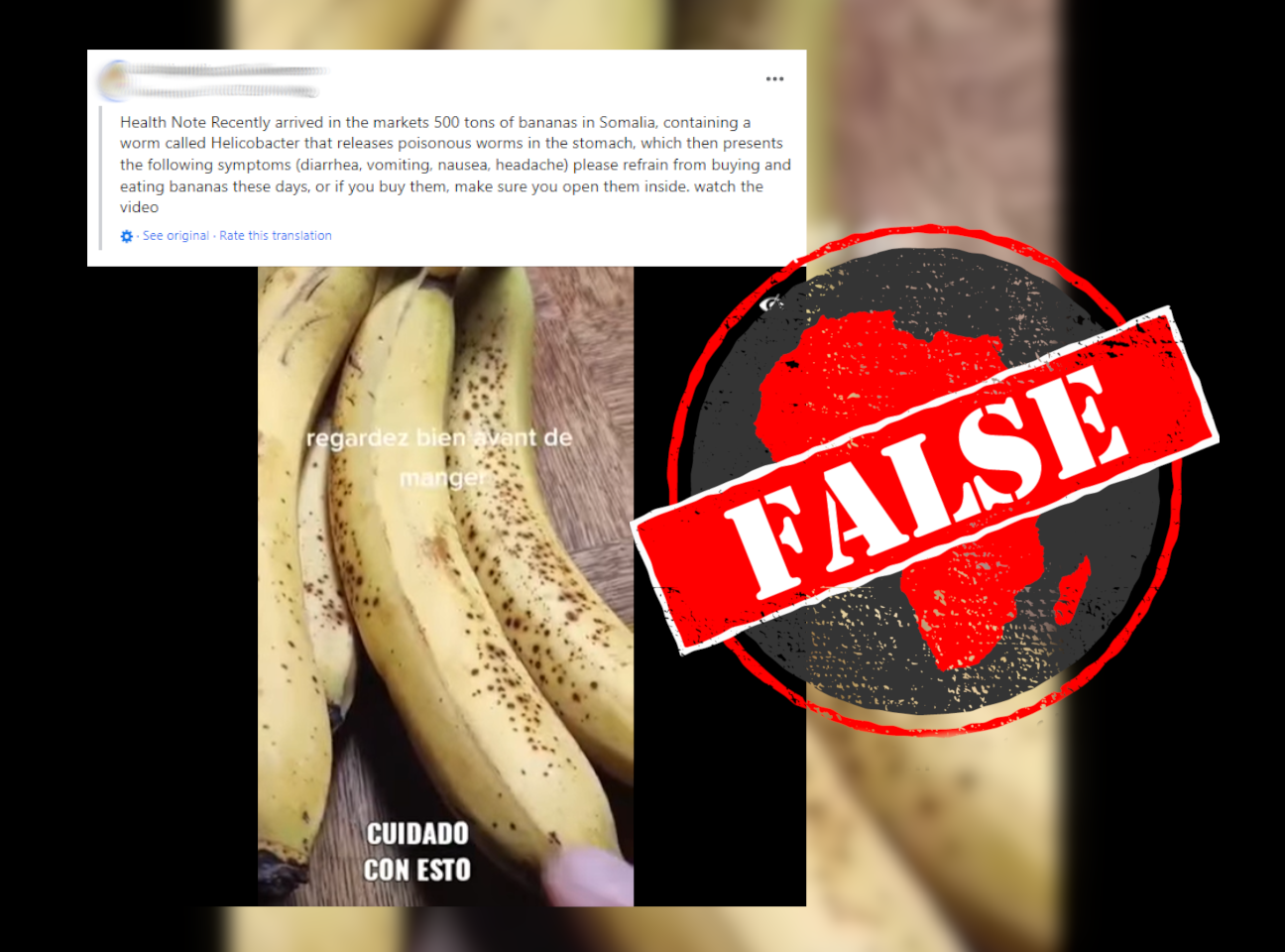 Helicobacter pylori a bacteria, not worm

The post does not say what country the video is from, only that it has been “forwarded as forwarded to me”.

We could not find any worm called “Helicobacter”. It could be a reference to Helicobacter pylori, a common bacteria that infects the stomach and is a main cause of ulcers, which are painful sores in the digestive tract.

It is not clear exactly how humans get infected with the bacteria, but experts urge hygiene practices such as washing hands, making sure food is well-cleaned and -cooked, and making sure drinking water is clean.

Most people live with the bacteria for years without any symptoms, and certainly don’t die within 12 hours from “brain death”.

In response to the video the Abu Dhabi Agriculture and Food Safety Authority said it was incorrect and contained “false and misleading” information.

The food agency said Helicobacter was a type of bacteria and not a worm. Furthermore, “worms are not known to complete their life cycle inside fruits when it is as big as shown in the video”.

In a statement, South Africa’s department of agriculture also said the video was “false”.

“There is no banana importation that recently took place through any of our ports of entry from Somalia,” the department said in November 2021, adding that it remained vigilant over imported food.

Other leading scientists have also described the video as untrue.

The video has also done the rounds in India and Malaysia, where it has been debunked by other fact-checking organisations.