Published on 15 January 2019
A Facebook post claims members of the Igbo community in northern Nigeria are targets in a campaign of murder.

On 12 January 2019 user Joshua Ikechukwu Udume, who calls himself a journalist and pro-Biafra activist, shared three gruesome photos of the alleged victims. 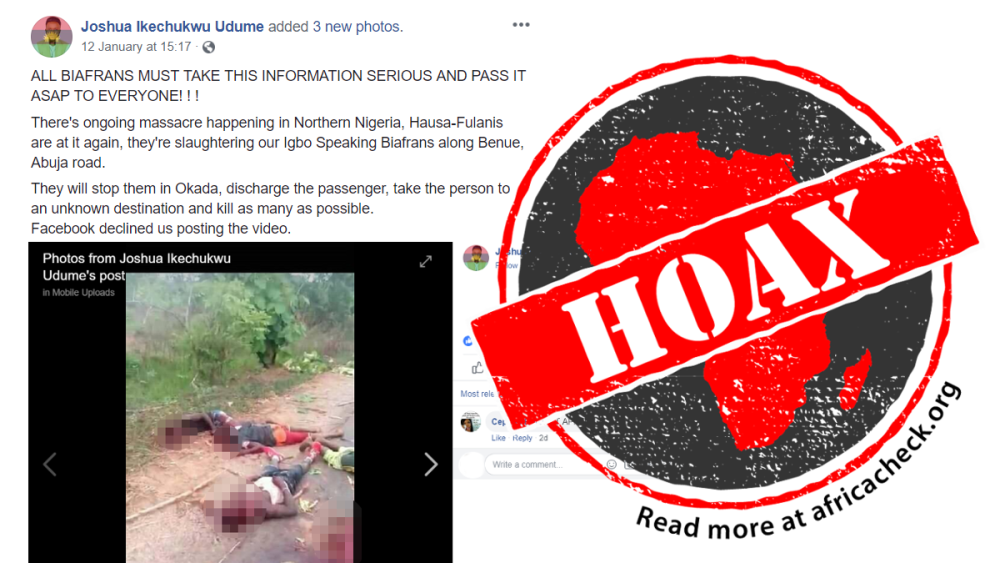 “Hausa-Fulanis are at it again, they're slaughtering our Igbo-speaking Biafrans along Benue, Abuja road,” he wrote.

He added a warning: “ALL BIAFRANS MUST TAKE THIS INFORMATION SERIOUS AND PASS IT A.S.A.P TO EVERYONE! ! !” (Note: Biafra was a region of eastern Nigeria that unsuccessfully tried to secede from the country in the late 1960s.)

There have been reported clashes between members of the Igbo and Hausa communities. The Hausa are mainly found in northern Nigeria. The post could therefore stoke political and social tensions.

The post was shared over 200 times, with some of Udume’s followers expressing shock. “What is happening?” asked one. Said another: “What do we have in common as Nigerians?”

The photos are not recent. A reverse image search on Google shows they were posted on a popular Nigeria-focused blog on 27 June 2018.

An accompanying video on the Nairaland Forum claimed they were of Muslim travellers in Plateau state who had been killed by militants.

Deputy police commissioner Jimoh Moshood told Africa Check the photos were not of any recent murder of Igbos and had been recycled.

“No such thing happened in Nigeria; on no occasion were Igbos being massacred,” Moshood said. He claimed the photos and story had been used in 2018 and “we debunked both the story and the picture”.  - Motunrayo Joel 15/01/2018