“Did you know in the late 1800s and early 1900s, Louis Vuitton sponsored ‘human zoos’ in which black people were put on display like exotic circus animals?”

This distressing message has been circulating on Facebook in South Africa since at least February 2021. It includes, as evidence, two black-and-white photos that seem to be from long ago.

The first shows a small black child alone in an enclosure with a crowd of white people behind the fence, looking in. The second photo is of a small building with trees around it and a sign reading “Louis Vuitton” above the door.

Louis Vuitton is a global company that sells expensive clothing, watches, luggage, handbags and other high-priced goods. It was founded in France in 1854.

But did the company really sponsor human zoos exhibiting black people, a century ago? 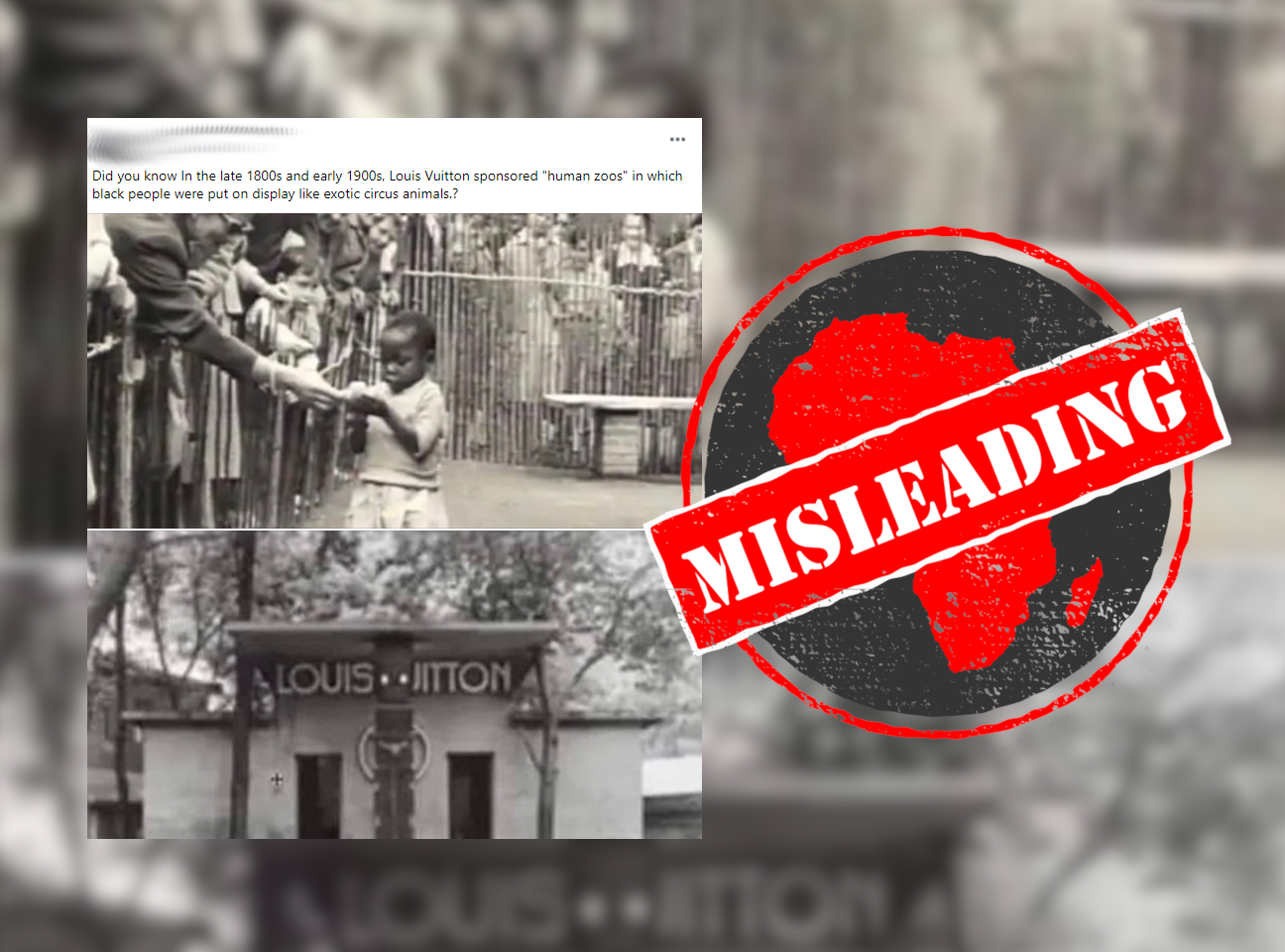 We recognised the photo of the small child from another viral post on social media, shared as far back as 2014. The caption when this photo is shared on its own usually claims the young child was “in a human zoo in Belgium in 1958”.

The exhibition of Africans has a long history in Europe. In 1897, 267 Congolese were shipped to Belgium for exhibition in King Leopold II’s colonial palace in Tervuren outside Brussels.

Present-day Democratic Republic of the Congo was under Belgian colonial rule from 1908 to 1960.

Leopold II established what was called the Congo Museum in 1898, which is considered the first instance of exhibiting Africans in this manner.

Other countries like Britain, France, Norway and Germany also put people from outside Europe on display. In the US, a man named Ota Benga, who had been kidnapped from the Congo in 1904, was exhibited in an enclosure together with monkeys at the Bronx zoo outside of New York City.

There was an exhibition of African people in Belgium as late as 1958, at the Brussels Universal and International Exposition, also known as Expo 58.

Congolese men, women and children were put on display in a recreated village, dressed in their traditional clothes, as photos taken at the expo show. There is some evidence that the photo of the young child was taken in 1958.

But is there a link between these two photos, the exhibition of Africans in front of European audiences, and Louis Vuitton?

Louis Vuitton at the Paris Exposition of 1931

Louis Vuitton, a craftsman and trunk maker, opened a workshop in Paris, France, in 1854. By the time he died in 1892, the brand bearing his name had become synonymous with luxury. In 2020, Forbes magazine named Louis Vuitton one of the world’s most valuable luxury brands.

The building in the second photo is the Louis Vuitton pavilion at the 1931 Paris Colonial Exposition. This was a similar event to Expo 58, though, according to the museum now situated on the same grounds, the exhibition “attempted to promote an image of Imperial France at the zenith of its power”.

According to USA Today, the Louis Vuitton pavilion displayed “products like leather trunks and ivory objects at the colonialism-themed event”. There is no evidence that there were people on display in the Vuitton pavilion.

According to records from the time, in French, there was only one exhibit at the fair which could be described as putting human beings on display “like animals at a zoo”. This was a “group of indigenous New Caledonians – ‘Kanaks’ – sensationally billed as ‘polygamous savages and cannibals’”.

New Caledonia is a series of islands in the southwestern Pacific Ocean, whose inhabitants are largely Melanesian.

However, “inhabitants of the colonies” were brought to the exhibition and “animated these reconstituted villages”. The museum website of the Palais de la Porte Dorée says: “Artisans worked in front of the public and others kept souvenir stands. Even if the bias of the exposition ... was not to make fun of the colonials ... it still meant exhibiting men and women to affirm France’s power over them.”

While we could find no evidence that “Louis Vuitton sponsored ‘human zoos’ in which black people were put on display like exotic circus animals”, as the Facebook post claims, the luxury goods company did have a pavilion at an event that could be described as such.

But according to USA Today, a spokesperson for Louis Vuitton said the allegations that the brand sponsored human zoos was “completely false”.

“The first photograph is of Louis Vuitton’s booth at the Exposition Coloniale Internationale in Paris in 1931 in which the brand showcased trunks and beauty cases, among other objects,” he said.  But “the photograph [of the child] has absolutely no affiliation with our brand whatsoever”.

The two photographs in the post are not from the same event. But there was a long history of exhibiting people from outside Europe to European audiences in what is now widely considered a degrading manner. Luxury brand Louis Vuitton took part in the 1931 Paris Colonial Exposition where there were instances of this, although not at the Louis Vuitton pavilion.