No, early childhood reading doesn’t reduce literacy later in life – it has lots of benefits

IN SHORT: A quote circulating online claims no research has found that teaching kindergarten kids to read gives them long-term advantages in life, and that in fact early literacy could reduce literacy later in life. But plenty of research going back to the 1990s shows the opposite is true.

“There is no, as in zero, research that finds long term gains from teaching children to read in kindergarten,” reads a quote circulating on social media in September 2022.

“In fact, the research tends to find early instruction reduces literacy in later years. The evidence tells us that early childhood should focus on equity, happiness, wellbeing and joy in learning.”

The quote is attributed to a blogger and author called “Teacher Tom”. It’s been posted on a South African Facebook group page (here) and on other popular education-focused groups (like here, here, and here).

Is teaching kindergarten kids to read actually a bad idea for future learning outcomes? We checked. 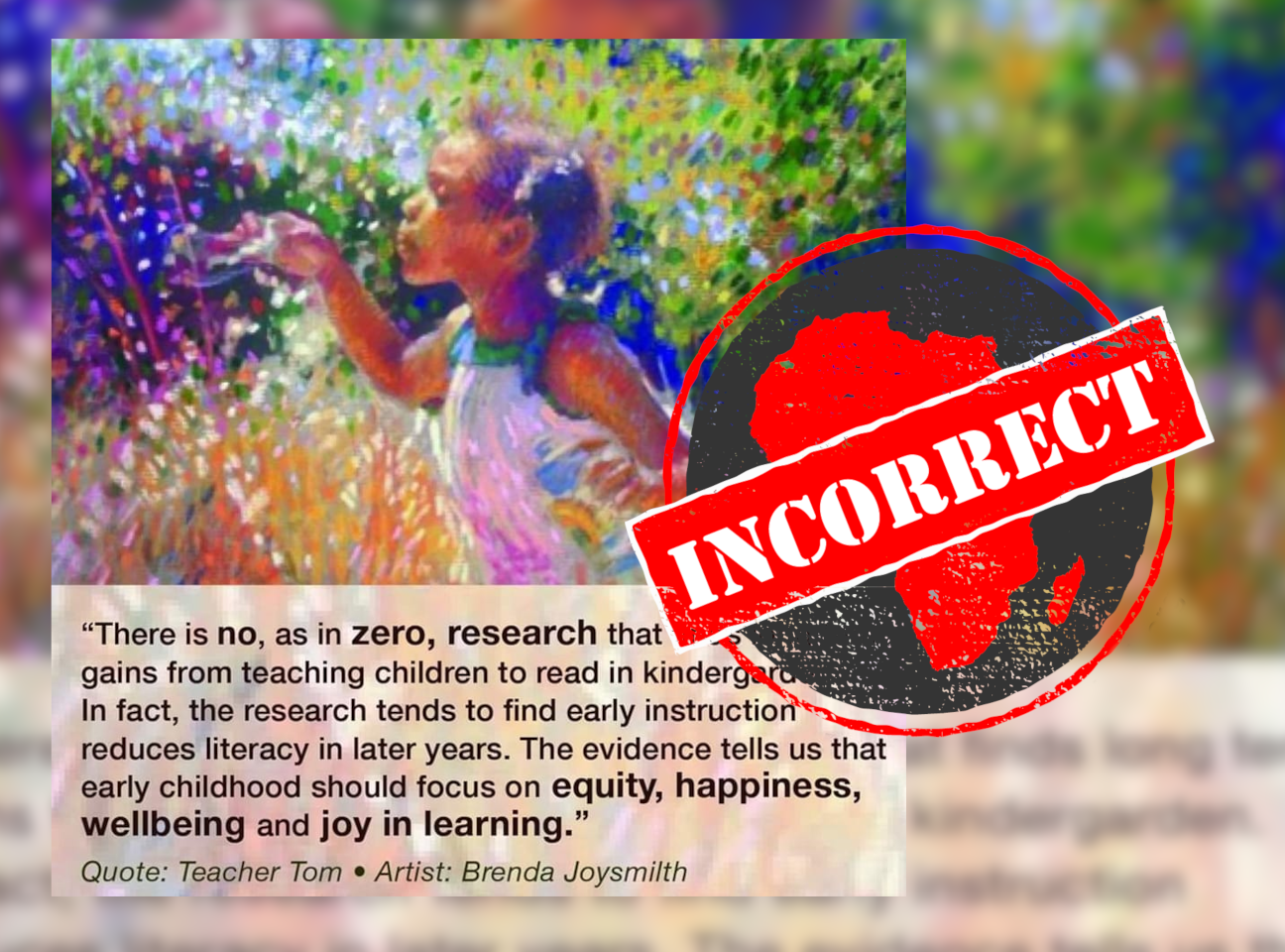 Research has consistently shown that early childhood reading is linked to better learning and other outcomes in later life.

This is based on meta-analyses, one published in 1995 and the other in 2011, that combine the results of multiple studies to show overall effects across different contexts and in many thousands of children.

There was some debate about whether these results showed a causal relationship between early reading and positive outcomes. This means researchers were not completely sure that the early reading caused the better outcomes.

But more recent research seems to have put the debate to rest.

For example, a study of more than 4,000 Australian children of kindergarten age (usually around four and five) was conducted in the 2000s. It followed the children from kindergarten to age 10 and 11.

The study looked at lots of information about the children’s lives, including their home and school environments, their early childhood experiences, and their social, emotional and physical learning outcomes.

Researchers examined what influence the children’s early reading skills had on outcomes later in life, including reading and language skills (literacy), number and maths skills (numeracy), and other learning outcomes like their teachers’ ratings of how they were developing.

Because they had collected lots of information about the children’s lives, the researchers were able to control for other factors that might have explained the outcomes in later life. This meant that through specific statistical methods, they could be confident that early childhood reading actually caused the results they found in later life, rather than other factors, like their family income or education level.

The researchers found that when children are read to early in life, their own reading and cognitive skills are better, at least up to age 10 and 11. According to the researchers, “results indicate a direct causal effect from reading to children at a young age and their future schooling outcomes regardless of parental income, education level or cultural background”.

Any language-based activity has benefits

Some studies also suggest it might not just be reading that provides these benefits.

Researchers found in 2011 that any kind of language-based routine at bedtime had positive effects on children’s cognitive development. This ranged from singing, talking or playing a language-based game to reading or telling stories.

This study also included over 4,000 children, from age three to five. And the researchers also ruled out the effects of other factors like family environment or upbringing.

This is not to say that “equity, happiness, wellbeing and joy in learning” aren’t important, as the quote claims. But these qualities and early reading are not mutually exclusive.