The article was published on the website South Africa Today on 18 January 2021, and is credited only to a “Political Correspondent”.

It opens: “The SAA has indicated that they only want to keep 88 of the 300 pilots who did not accept severance packages last year and in order to achieve this they will fire only white pilots, an openly racially discriminatory plan. The SAA wants to keep their racial quota system with regards personnel in place at all costs and that is why they do not want to fire black pilots.”

The article is marked “opinion”, but makes statements of apparent fact. Are its claims accurate? We checked. 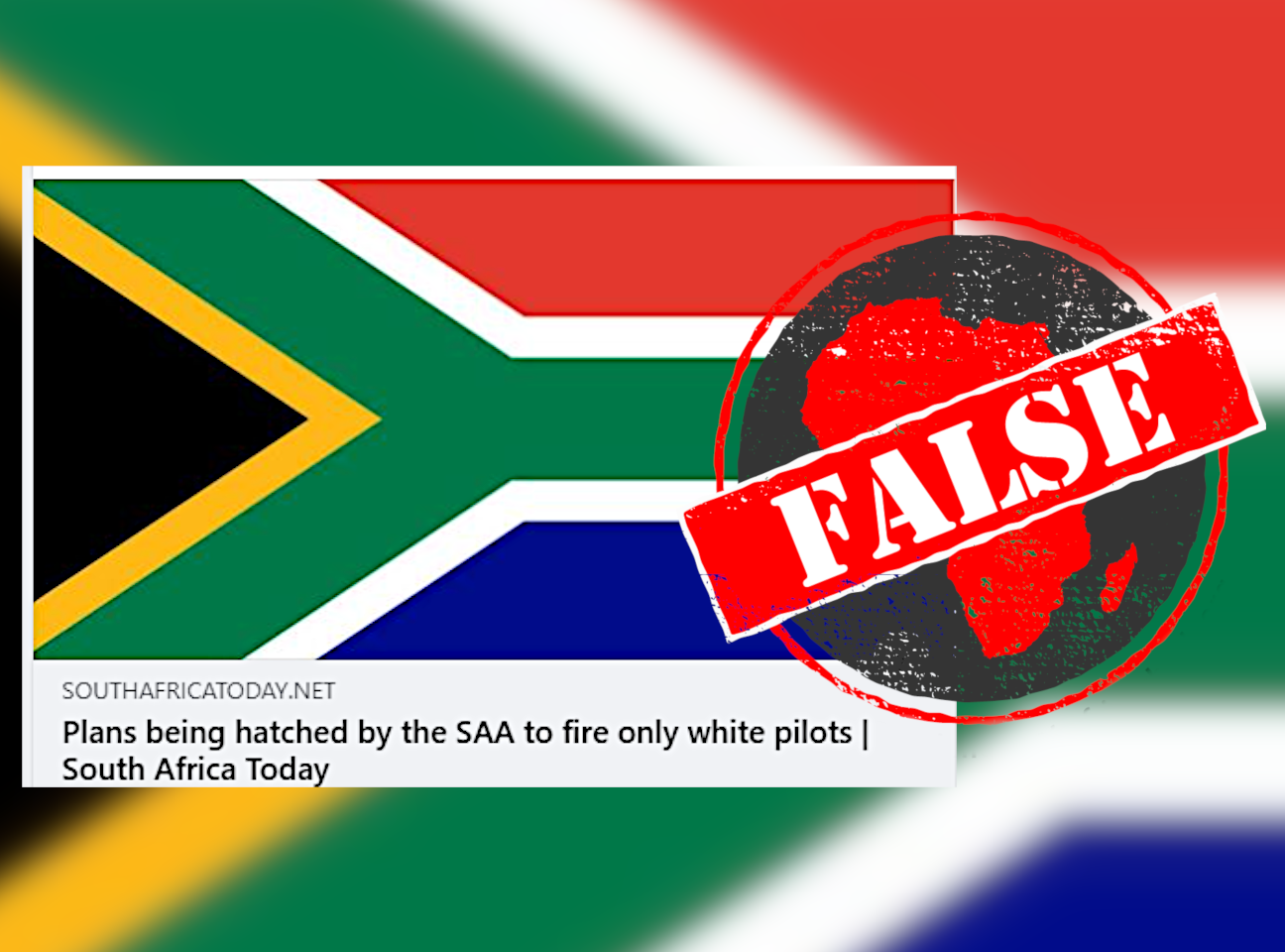 The article does have its origin in verified news, and does claim to quote the actual chairperson of the South African Airways Pilots Association, Grant Back.

But it doesn’t say when or where Back spoke to the media on the subject, making it difficult to trace the quote. The airline has been headline news since it went into business rescue in December 2019 and was “effectively ‘mothballed’” in May 2020.

In November 2020, it was reported that of the 88 pilots to be retained by the airline, SAA only wanted to select four white male pilots, out of the 261 who had not taken the airline's voluntary severance package. At the time, Back was quoted calling the approach “discriminatory and unlawful”.

On 18 December, the pilots association was “locked out” of negotiations with the airline by the business rescue practitioners.

There is no evidence or communication from SAA or in the press that the airline plans only to fire white pilots. And we could find no reliable source quoting Back saying so.

‘This site may contain dodgy news’

South Africa Today is a known misinformation site. A 2018 investigation by News24, which describes it as “an aggregator website that republishes negative articles ... promoting white victimhood in South Africa”, reveals that the site is run by expat South Africans living in Thailand.

The KnowNews tool, developed by the nonprofit Media Monitoring Africa, alerts readers to the credibility of websites.

It says this about South Africa Today: “WARNING. This site may contain dodgy news. Think twice about trusting any story. Think thrice about sharing.”

And there are several signs that the site isn’t trustworthy.

The first is that anyone can submit articles to the website. While someone submitting an article has to agree that “it is up to SAT to determine if material submitted is appropriate to be published”, there appears to be no editing or fact-checking process in place.

The website lists only a few rules for submitting an article, including that “under no circumstances will racism or hate speech be promoted by SAT”.

The stated goal of the website is to “spread the news on a global scale”. In the site’s “About” section, it says: “The website is free for all to register and submit links of important news. By sharing a link it will accumulate on our website and will be spread further. We never know how far reaching your link might be. Help us to spread the news.”

There is no mention of verifying this “news”.

Users who upload articles can choose to remain anonymous, as “Political Correspondent” did. This could be another warning sign – there is some evidence that anonymity online contributes to the spread of misinformation.

Africa Check has debunked other false claims by South Africa Today: that white people are “finally excluded” from the country’s job market and that US Marines are coming to “stop genocide in South Africa”.

Jobs at Kenya’s Quickmart supermarkets advertised on Facebook? No, beware of scam