“The Real Nelson Mandela died in 1985,” begins a long Facebook post that has been viewed more than a million times since it was shared on 6 July 2021.

It claims that the former South African president died in 1985, not 2013, and was replaced with a lookalike who never spoke isiXhosa or wore traditional clothes after his release from prison in 1990.

Several other accounts have shared an identical message. But the most popular, shared more than 47,000 times, was posted by an account claiming to belong to Buntu Petse, a South African actor. She is best known for her role as Nontle Majola on the popular soap opera Generations: The Legacy.

So at least one of the accounts sharing this message is fake, but are the claims true? 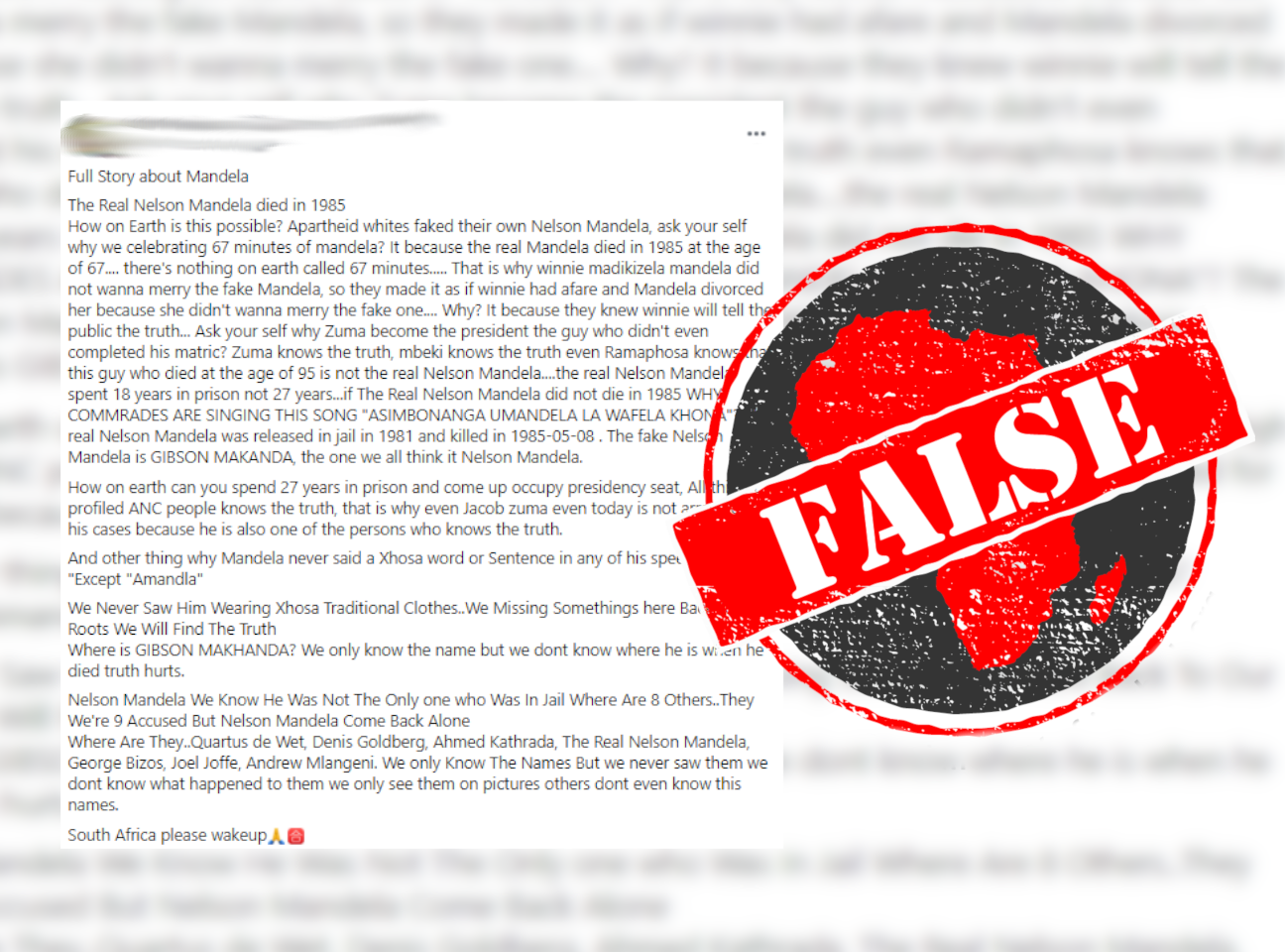 The post claims that “Mandela never said a Xhosa word or Sentence in any of his speeches” and “We Never Saw Him Wearing Xhosa Traditional Clothes”. But neither is true.

There are several photographs of Mandela in traditional Xhosa dress, particularly when celebrating special occasions.

There are also multiple videos of Mandela speaking isiXhosa, his mother tongue. He even addressed a crowd in isiXhosa outside Cape Town city hall directly after his release from prison on 11 February 1990.

The post also claims that eight others who were sentenced to imprisonment alongside Mandela were not released: “They We're 9 Accused But Nelson Mandela Come Back Alone.”

But this is also false.

The post appears to refer to the Rivonia trial, in which Mandela was sentenced to imprisonment, along with seven other defendants of the 11, not nine, who were accused.

The post lists several people, including Denis Goldberg, Ahmed Kathrada and Andrew Mlangeni, who were all defendants at the trial. It claims that “we dont know what happened to them” and “We only Know The Names But we never saw them”.

Kathrada was released after 26 years in prison and died in 2017. He founded the Ahmed Kathrada Foundation in 2008 which is still active.

Mlangeni served 27 years in prison, and also died in 2020, the last of the Rivonia trialists to die. He left behind the philanthropic Mlangeni Foundation, founded in honour of his wife June in 2001.

Bizos, Joffe and De Wet not defendants in Rivonia Trial

The post also mentions several people who were not in fact defendants in the trial or ever imprisoned. George Bizos was an attorney and Joel Joffe a lawyer who represented the defendants.

Quartus de Wet was the judge who passed the sentence, described by Mandela himself as “a poker-faced judge who did not suffer fools gladly” in his autobiography.

But their lives – and deaths – were also documented. Bizos helped draft South Africa’s new constitution, and represented the families of those killed at the Marikana massacre in one of his last major trials as a lawyer. He died in 2020.

Joffe was forced to leave South Africa. He settled in the United Kingdom, where he founded a successful insurance agency and eventually died in 2017.

De Wet retired in 1969 and died in 1980, according to an article in the journal Consultus, published by the General Council of the Bar of South Africa.

Several of the social media accounts sharing this false claim have also shared a photo used in another claim Africa Check has previously debunked. It says a mole visible in photos of Mandela as a young man moved to the other side of his face later in his life.

However, as we pointed out before, this isn’t because Mandela was replaced by a double, but because the photos were flipped.