No, hazmat suits not needed to install 5G phone technology

Is 5G technology so dangerous that technicians have to wear hazmat suits to install it? A graphic widely shared on Facebook in South Africa suggests so. It shows a person in white overalls, standing on a crane and, it seems, repairing telecoms equipment.

The text reads: “5G guy wearing a fucking hazmat radiation suit”. This is echoed in a comment below the image: “5G tower install requires hazmat suit to install.”

A hazmat suit – short for hazardous materials suit – is a whole-body garment worn to protect people against dangerous materials.

The term “5G” stands for the “fifth generation” of mobile internet connectivity, set to replace the current 4G technology. It promises “much faster data download and upload speeds, wider coverage and more stable connections”, according to the BBC.

But is it dangerous? And what’s really happening in the photo? 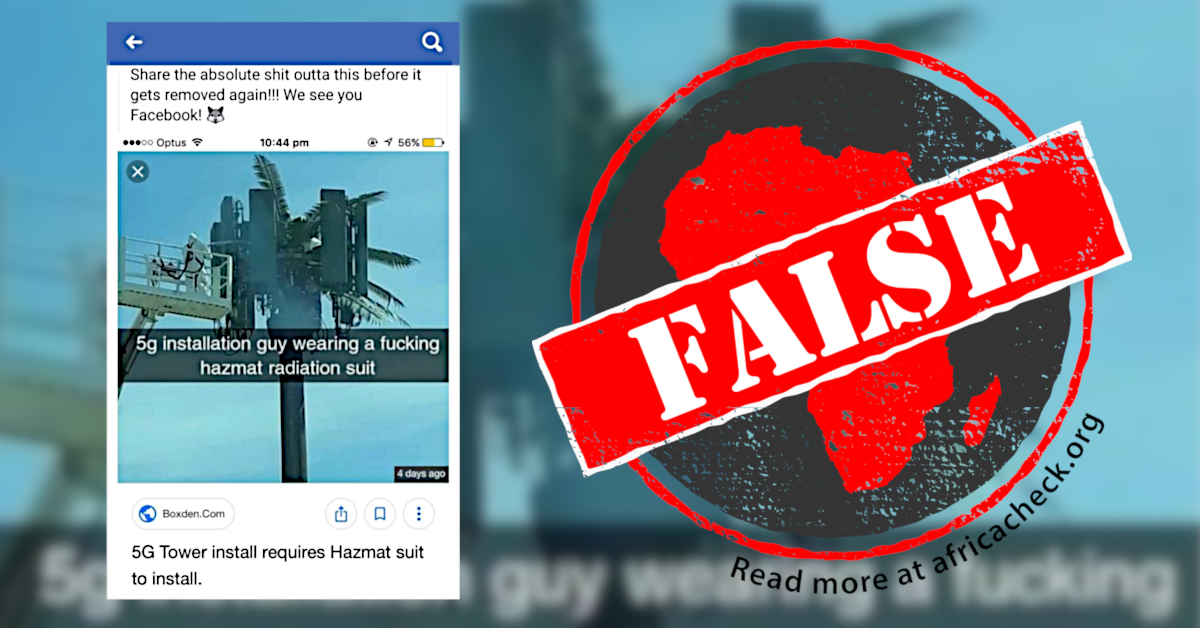 ‘Non-ionising radiation does not have enough energy’

Africa Check spoke to the technical team at Vodacom, a South African mobile communications company. We asked whether a worker would have to wear a hazmat suit when installing 5G and if the hazmat suit would actually help against radiation.

“No, a hazmat suit is required for working with ionising radiation, which is totally different to the non-ionising emissions from radio equipment,” said Vodacom.

Earlier in 2019 fact-checking organisation Full Fact found that the person shown in the graphic was probably not installing 5G, “but wearing protective clothing to clean a 4G mobile phone tower”.

“The structure in the picture looks like a monopalm, which is a type of 4G mobile phone tower seen in the US that’s adapted to look like a palm or other common tree.”

Fact-checking site Snopes has also debunked the claim: “Scientifically, this claim makes zero sense. While cellphone towers in general do use electromagnetic radiation, the form is non-ionising.” – Taryn Willows

Photo of Mozambique in 2019, not Zimbabwe-South Africa border in 2021