IN SHORT: Kenyan MP Jeremiah Kioni had his nose bloodied in the country’s recent elections. A fake graphic that quotes him blaming a bizarre rigging tactic that used nightbulbs from Bangkok seems to satirise his earlier odd claim of “facemask” election fraud.

A graphic on Facebook quotes Kenyan member of parliament Jeremiah Kioni levelling bizarre accusations of election rigging against his competitor in the 9 August 2022 general elections.

Kioni, secretary-general of the Jubilee Party, lost his Ndaragwa constituency seat to George Gachagua of the United Democratic Alliance (UDA).

The graphic shows a photo of Kioni. Its text reads: “I have to admit that William Ruto’s vote-rigging scheme is probably 22nd Century’s. In my own Constituency Ndaragwa, My UDA - competitor had imported special bulbs from BANGKOK.”

Bangkok is the capital city of Thailand, a country in southeast Asia.

The quote continues: “The bulb knobs & lamps Spread darkness instead of light. At midday, all polling Stations in Ndaragwa were totally dark. I did not win in any single polling station. We confiscated some of the bulbs for evidence in court only to realize that they melt into water within Seven hours of their first use.”

UDA candidate William Ruto was declared the winner of the presidential election and will be sworn in on 13 September.

The graphic could be taken seriously, because Kioni has oddly alleged that electoral commission officials wearing facemasks urged Kenyans in voting halls to cast their ballots for the UDA.

“When you have a face mask on, your lips cannot be seen and the voice is stifled. They influenced the voters to vote us out,” he said on Citizen TV.

It has the logo and branding of Tuko, a popular Kenyan news site, and appears similar to posts the publication has shared on social media.

But did Tuko really quote Kioni as saying lightbulbs imported from Bangkok “spread darkness instead of light” in his constituency’s polling places? 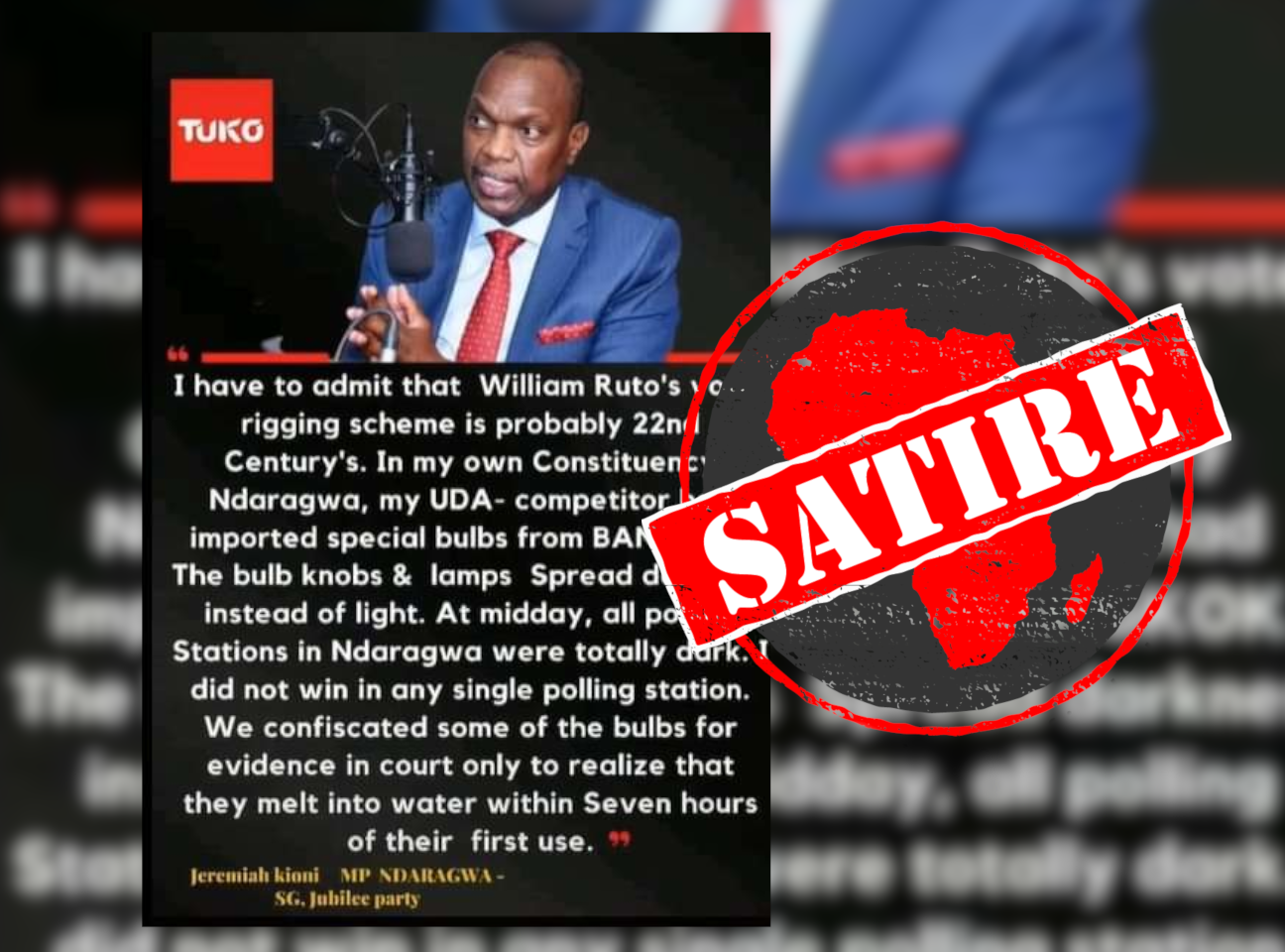 Graphic likely to be satire

On 2 September, Tuko posted the graphic on its official Facebook page, stamped “FAKE”.

“FAKE NEWS ALERT! This is to notify our readers that the information on this template is fake and does not originate from us. All verified and authentic news and information are published on our social media platforms and website,” the post reads.

It adds: “Together, let's stop fake news. Verify before you share any information.”

But the absurdity of the quote – bulbs that create darkness and then dissolve into water – indicates that it’s probably satire. It’s making fun of Kioni’s earlier claim of election fraud.