The recent World Economic Forum (WEF) annual meeting, held in the Swiss town of Davos from 22 to 26 May 2022, has already given the false information factory new raw material.

“Pfizer CEO Says it’s their dream to Reduce the Population by 50% in 2023,” reads text on a graphic posted on Facebook in South Africa on 29 May. It includes a blurry photo of two men on a stage with the WEF logo on screens behind them.

Pfizer is a global drug company that, with BioNTech, developed and sells the Comirnaty Covid vaccine.

The claim is going viral across the world. It comes from a doctored video of Pfizer chief executive Albert Bourla in conversation with WEF chairperson Klaus Schwab at the 2022 gathering, on 25 May.

In the video, Bourla appears to say: “It’s really a dream, but we had, together with my leadership team when we started in ‘19 [2019] … to set up the goals for the next five years. And one of them was by 2023 we would reduce the number of people in the world by 50%. I think today, this dream is becoming reality.”

The audience is then heard clapping.

The altered video has been posted on Facebook, Twitter and various blogs. It often appears with the same breathless headline: “EXPOSED!! PFIZER CEO SAYS IT’S THEIR DREAM TO REDUCE THE POPULATION BY 50 PERCENT IN 2023!!”

But Bourla didn’t say that. 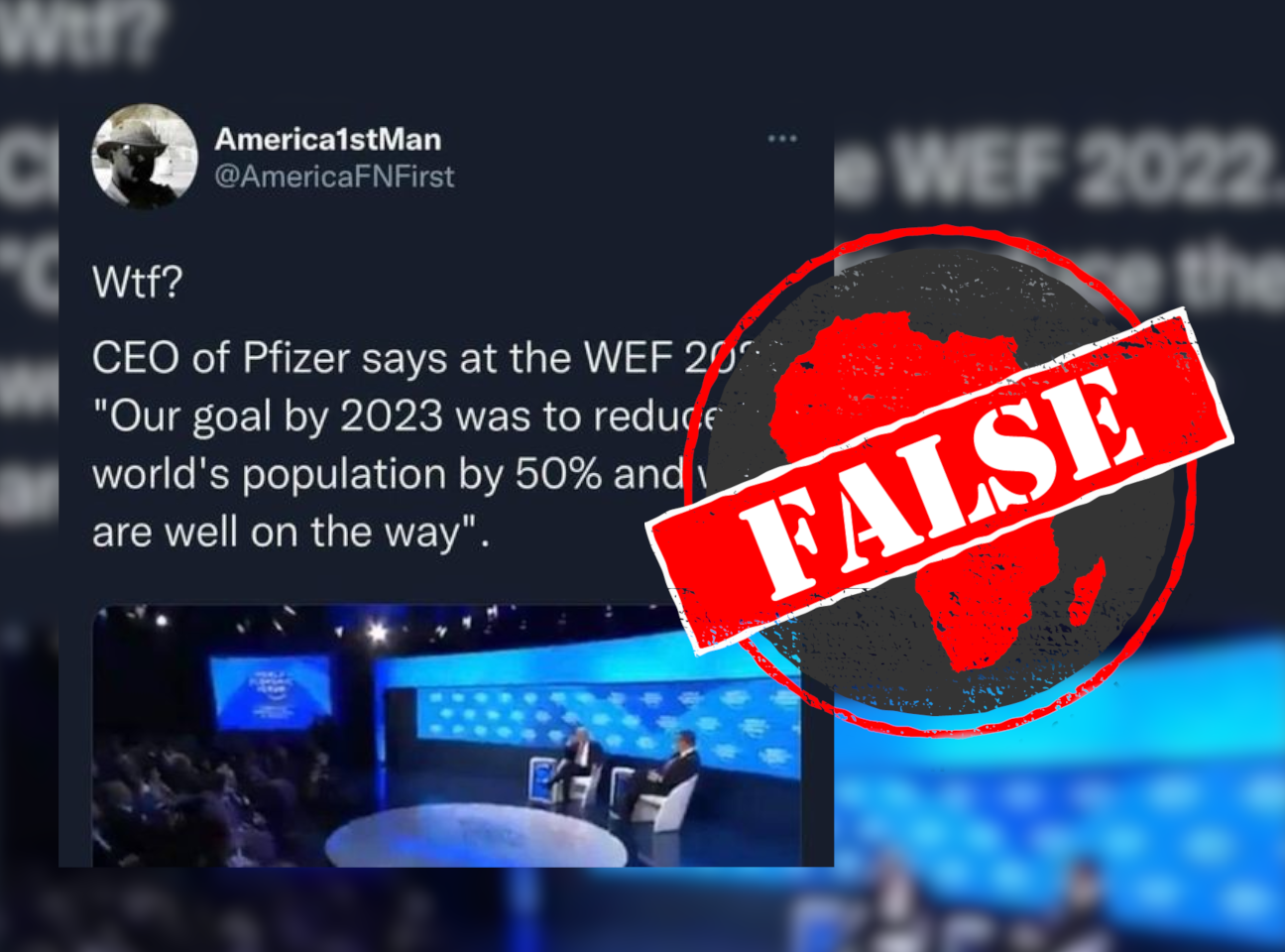 The original video can be seen on the World Economic Forum’s YouTube channel. The viral clip begins at the 2:35 minute mark. In the key sentence, Bourla says: “And one of them was by 2023 we would reduce the number of people in the world that cannot afford our medicines by 50%.”

The words “that cannot afford our medicines” have been edited out of the video.

Bourla was discussing Pfizer’s “accord for a healthier world” plan to supply its patented drugs on a cost basis, with no profit, to poorer countries. The initiative was announced at the 2022 WEF gathering.

Pfizer has been accused of profiteering from the Covid pandemic, milking public health systems needing to vaccinate their people.

With those huge earnings, and about 32% of the world still to be vaccinated against Covid, Pfizer doesn’t have much motive to cut its potential market by half.

But why was the video edited to make Bourla appear to say his company wanted to “reduce the number of people in the world by 50%”?

The video attempts to support a broad and jumbled – but worryingly popular – conspiracy theory that “global elites” are hell-bent on “depopulating” the planet. The conspiracy is said to involve Bill Gates, the World Economic Forum, the United Nations and more. Its supposed methods include not only Covid-19, but vaccines against the disease.

Many believers saw proof in the “Great Reset”, the theme of the 2020 WEF gathering and the title of a book by Schwab.

In 2021, Africa Check debunked a claim that in his book, the WEF chair writes that “at least 4 billion ‘useless eaters’ shall be eliminated by the year 2050”. The quote actually comes from an obscure book with an odd history, published more than 30 years ago.

That claim was false – entirely made up. And the video was intentionally edited to make it appear that Pfizer’s CEO said something he didn’t. If theorists really believe there’s a “depopulation” conspiracy, they shouldn’t have to fabricate evidence for it.

And it’s worth mentioning that before the Covid pandemic, Pfizer was best known for its erectile dysfunction drug Viagra. If the company’s “dream” was to reduce the world’s population, it would be unlikely to produce a pill that helps make more people.