No, pharmaceutical company Pfizer and billionaire Bill Gates not linked to current baby formula shortages in the US

“Pfizer says do not breast feed. Baby formula runs scarce. Bill Gates promotes new artificial breastmilk technology. All within two weeks.” This is the wording of a screenshot of a tweet dated 11 May 2022 and reposted on Facebook on 13 May.

The screenshot has been widely reposted on multiple pages. One example has been reposted 166 times and another 925 times.

Severe shortages of baby formula have been reported across the US since the end of April. The shortage has been attributed to the closure of an Abbott production plant. The plant was closed after an outbreak of a bacterial infection among babies who had consumed formula produced there.

Abbott has announced plans to reopen the plant after reaching an agreement with the US Food and Drug Administration.

But is any aspect of this claim, other than “baby formula runs scarce”, true? Did pharmaceutical company Pfizer warn mothers not to breastfeed and is billionaire Microsoft founder and philanthropist Bill Gates promoting a “new artificial breast milk technology”? We checked. 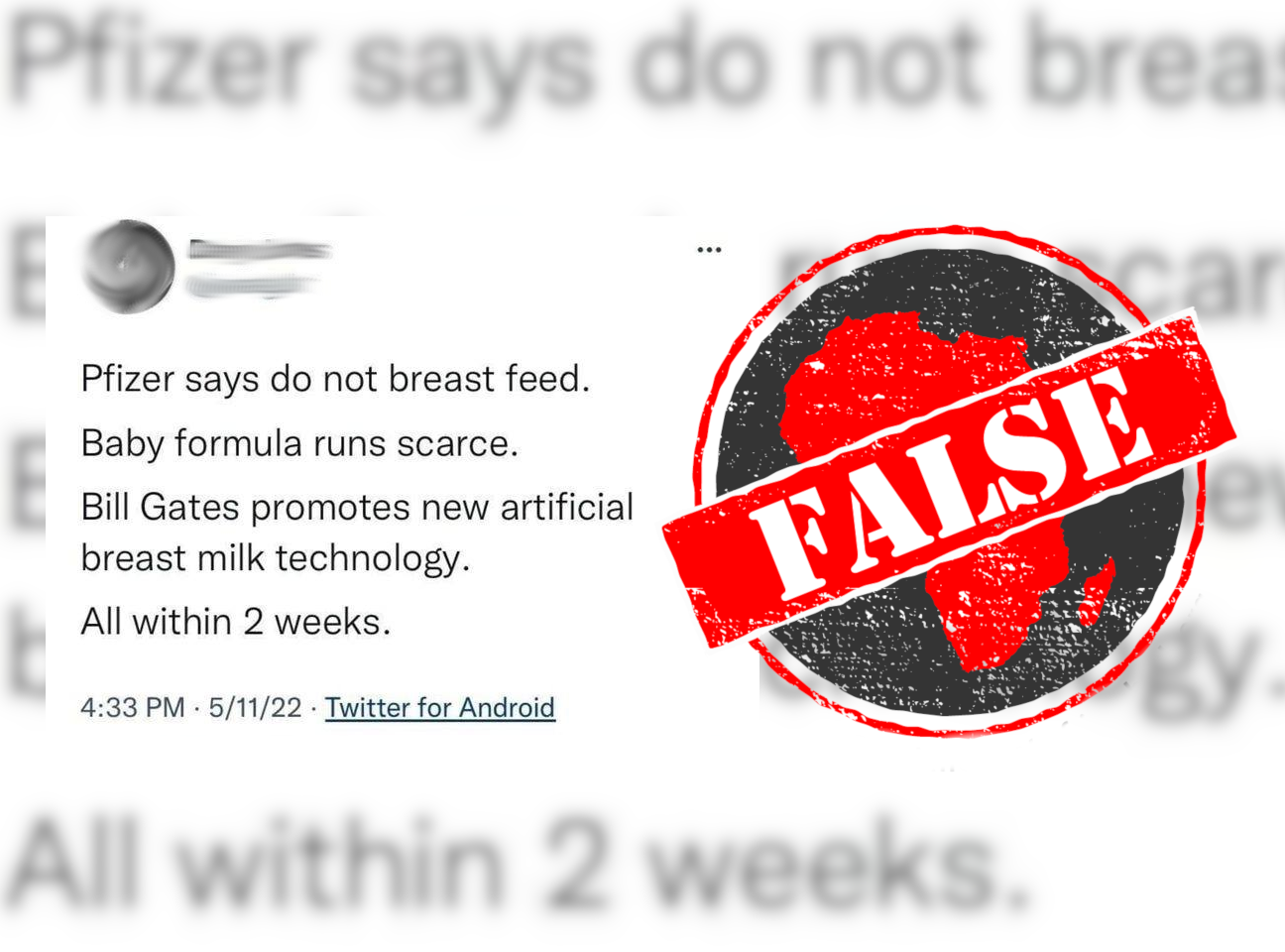 In December 2020 an advisory from the UK’s Medicines and Healthcare Products Regulatory Agency (MHPRA) warned that it was “unknown” whether the vaccine could be excreted in human milk.

“A risk to the newborns/infants cannot be excluded. Covid-19 mRNA Vaccine BNT162b2 should not be used during breast-feeding,” the document said.

An MHRA spokesperson told media outlet Reuters in May 2022 that this was their assessment at the time the vaccine was approved.

But they also said: “Since then new data which has come to light (both non-clinical and post-authorisation ‘real world’ data) supports the updated advice on vaccinating those who are pregnant and breastfeeding.”

“Over 104,000 pregnant people have received at least one dose of Covid-19 vaccine in England and Scotland and no concerns of the safety of the vaccines have been raised.”

An updated MHRA advisory published in December 2021 has removed the recommendation that the vaccine should not be used during breastfeeding.

And the US Centers for Disease Control and Prevention recommends vaccinating against Covid-19 during pregnancy and breastfeeding.

We could find no evidence – from 2022 or earlier – that any Pfizer representative said that mothers should not breastfeed their babies.

Gates firm invested in Biomilq in 2020

A Google search indicates that US firm Biomilq, a start-up that is hoping to develop the technology to produce artificial human breast milk, received a US$3.5 million investment from an investment company founded by Gates, Meta founder Mark Zuckerberg, and others. But the investment was made in June 2020, not in April or May 2022.

The artificial breast milk would be produced using mammary epithelial cells, the cells in breast tissue that coat the surface of milk ducts.

On 3 May CNN reported that Biomilq founder Leila Strickland said artificial breast milk was still three to five years away from being available.

Both Strickland and the Biomilq website have said that the milk was not intended to replace breastfeeding but to be an option for those who struggled to breastfeed.