No, Philadelphia experiment that made entire ship vanish never happened

“The Philadelphia experiment which allegedly took place in 1943 with the purpose of making ship invisible to enemies radar,” reads a graphic posted on Facebook in South Africa.

“It is said that the ship not only vanished completely but it was teleported to Norfolk and went back in time for 10 seconds,” the claim continues.

“When the ship appeared again some crew members were physically fused to bulkheads, others developed mental disorders, a few disappeared completely, and some reported travelling into the future and back.”

The story of this experiment has been circulating for years. There have been two different movies about it, and several conspiracy theory books.

But was it a ship or the truth that vanished in the tale of this experiment? We checked. 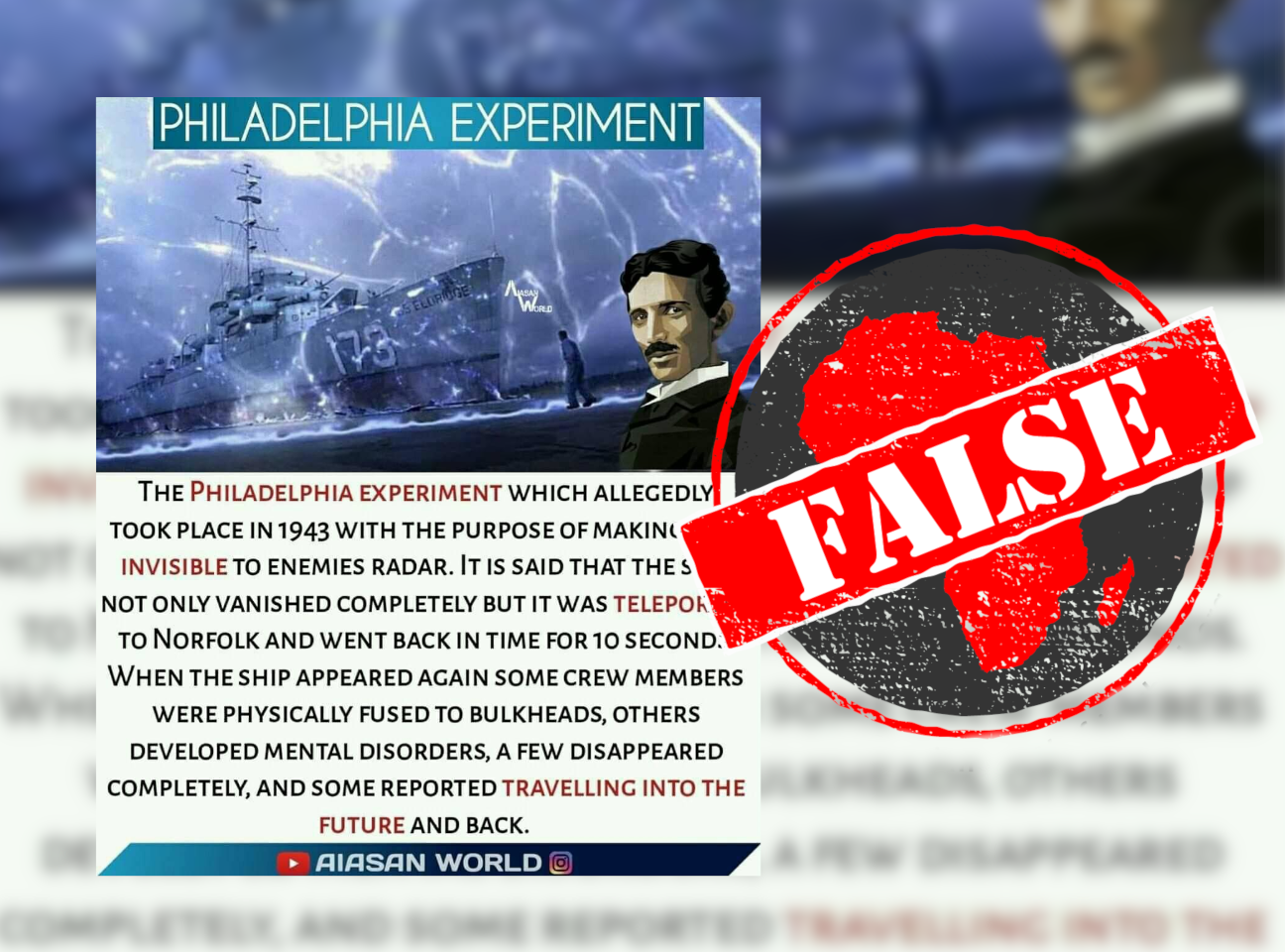 The story of this military experiment gone wrong is often referred to as Project Rainbow, according to an article in the UK’s Guardian newspaper.

It recounts a “cannon-class destroyer USS Eldridge (DE 173)” ship docked in 1943 at the Philadelphia Navy Yard. The ship was said to be “fitted with a number of powerful generators and something called a time zero generator”, the Guardian reports.

Once the generators were switched on it was allegedly “engulfed in a greenish haze, then, with the imprint of its hull still visible in the water, the ship disappeared from view for 20 minutes”.

Once it returned to reality, much like the graphic says, “many of its crew were horribly burned, others had ‘merged’ with the structure of the ship and one vanished entirely”.

But there’s no truth to the story, the newspaper adds. It was created in 1956 by eccentric UFO enthusiast Carl Allen who “claimed to have been onboard the Furuseth at the time of the second experiment”.

Experiment not possible ‘except in science fiction’

The Naval History and Heritage Command, responsible for the preservation, analysis, and dissemination of US naval history and heritage, reviewed the archives of the Eldridge deck log for 1943. It found that the ship was never docked in Philadelphia that year.

The command says it has “failed to identify records of a Project Rainbow relating to teleportation or making a ship disappear” in its archives.

“After many years of searching, the staff of the Archives and independent researchers have not located any official documents that support the assertion that an invisibility or teleportation experiment involving a Navy ship occurred at Philadelphia or any other location.”

And a September 1996 letter by the Office of Naval Research (ONR), posted online by the US military’s Washington Headquarters Services, says the ONR had received many queries about its possible role in the Eldridge’s “disappearance”.

The ONR says these suspicions may stem from real experiments in making a ship undetectable or "invisible" to magnetic mines. But not invisible to the human eye.

The letter says that the ONR “has never conducted any investigations on invisibility, either in 1943 or at any other time”.

The ONR also says that its scientists “do not believe that such an experiment could be possible except in the realm of science fiction”.

Although the story of an experiment that fused humans to a ship might be engrossing, the Philadelphia experiment did not actually exist.