IN SHORT: A photo posted on social media shows two white girls next to a young black boy in a cage. It’s shocking to modern eyes, with its racist undertones, but there is little evidence for who the children were, and none that one of them is the UK’s current ambassador to Somalia, Kate Foster.

Several posts on Facebook and Twitter feature a black-and-white image of three children – two white girls either side of a younger black boy. The boy is sitting inside a wire bird cage. The posts claim that one of the girls is British diplomat Kate Foster.

Foster is the current British ambassador to Somalia, a position she has held since February 2021.

But is this a photo of Foster as a child? We investigated. 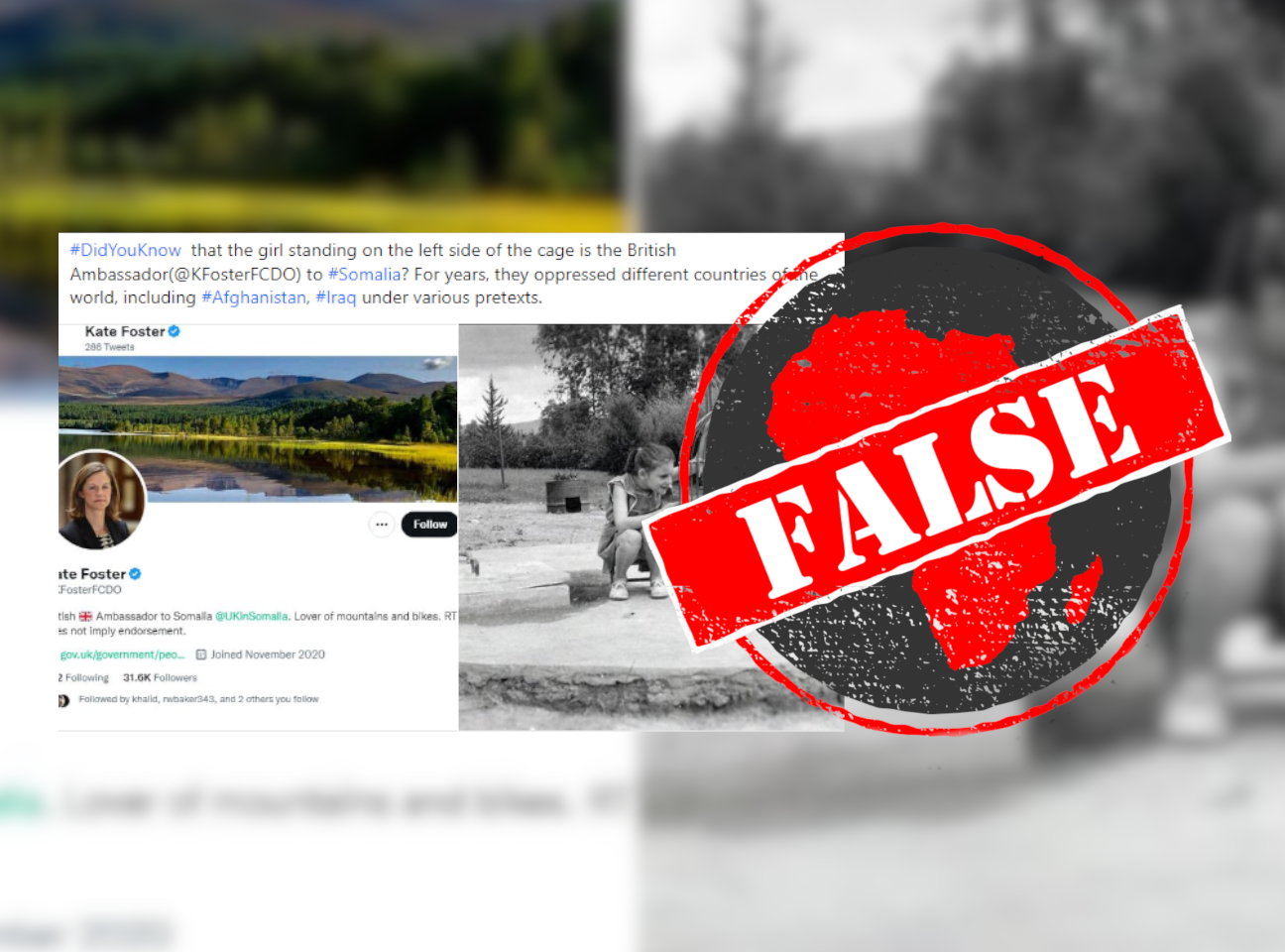 Photo frequently subject of false claims, taken in Congo in 1965

This photo has been published out of context before, and has been previously fact-checked before. In November 2020 AFP Fact Check debunked the claim that the photo was from French Congo, the country now known as the Republic of the Congo, or sometimes “Congo (Brazzaville)”.

The photo of the three children was in fact taken during the Belgian occupation of what is now the Democratic Republic of Congo (DRC).

Belgian Congo was a Belgian colony from 1908 until 1960, when it gained independence. Previously, the colony had been a privately owned state known as Congo Free State, ruled by Belgian king Leopold II.

Congo Free State is known for the brutal atrocities committed by the ruling government. Even after Leopold II’s death in 1909, the Belgian Congo still relied on indentured labour, and continued to commit abuses such as the forced separation of children from their parents.

During his first official visit to the DRC in 2022 Belgium’s current king Philippe said that the colonial regime “was one of unequal relations, unjustifiable in itself, marked by paternalism, discrimination and racism”.

No evidence that photo shows Foster

This makes it very unlikely that they show the British Kate Foster. There is no evidence that she lived in the Belgian Congo as a child, or that she is even old enough to be one of the children in the picture.

There are very few clues as to who the children are, and none point to either one of them being Foster.

The children are not named in the archive, but other photos from the Van de Meerssche collection include a pair of girls who may be the same as those posing with the child in the cage.

It’s not certain, but two women pictured in the collection may be the same girls a few years later. The caption beside one photo of these women refers to them as Agnes and Hilda, and apparently shows the pair about to leave for Belgium in May 1960, a month before the end of Belgian Colonial rule in the DRC.

Foster too young to be in old photo

While we couldn’t find her exact date of birth, Foster has also tweeted a picture of herself aged 13. The photo is in colour and shows a child with short hair dressed in much more modern clothing than the children in the picture from the Belgian Congo.

Foster is most likely simply too young, based on publicly available information, to be one of the children in the photo. She has not tweeted about living in the Belgian Congo, and none of the accounts sharing the claim have included a source to support it.