Kenya is set to hold general elections on 9 August 2022. Voters will choose a new president, as well as members of the senate and national assembly, and county governors and assemblies.

The leading candidates for the presidency are current deputy president William Ruto of the Kenya Kwanza coalition of political parties, and Raila Odinga of the Azimio la Umoja alliance.

In the run-up to the polls, politicians have been travelling the country appealing for votes.

A photo is circulating on Facebook with the claim it shows Ruto and Kilifi county governor Amason Kingi campaigning at a rally while they ignore Malindi MP Aisha Jumwa’s pleas to speak.

Malindi is the largest town in Kilifi county, on Kenya’s Indian Ocean coastline to the east.

Jumwa is running for the Kilifi governorship on the ticket of Ruto’s United Democratic Alliance (UDA), a party in the Kenya Kwanza coalition. She was previously an ally of Ruto’s rival, Odinga.

Kingi is the outgoing governor. He recently ditched Azimio la Umoja to join the UDA.

The photo shows Ruto and Kingi sitting on top of a car in the middle of a huge crowd. Jumwa, circled in red, can be seen in the crowd raising her arm, seemingly to attract their attention.

A typical caption reads: “Dear William Ruto , this is a woman , a leader , a gubernatorial candidate by the name Aisha Jumwa vying under UDA , you’re frustrating her because of Amason Kingi who joined your camp weeks ago , why is she begging to speak at your rallies?”

It continues: “Is this how your reward your foot soldiers? Aisha is a woman Raila Odinga has mentored, Mbona unafanyia watu wa Baba hivi !!” The Kiswahili translates as: “Why are you doing this to Raila’s people !!”

The suggestion is that Ruto and Kingi were ignoring Jumwa because of her previous association with Odinga.

The photo and its claim can also be seen here, here and here.

Africa Check has previously debunked photos used to spread propaganda during Kenya’s election period. Does the photo really indicate that Ruto and Kingi ignored Jumwa “begging to speak” at a rally? 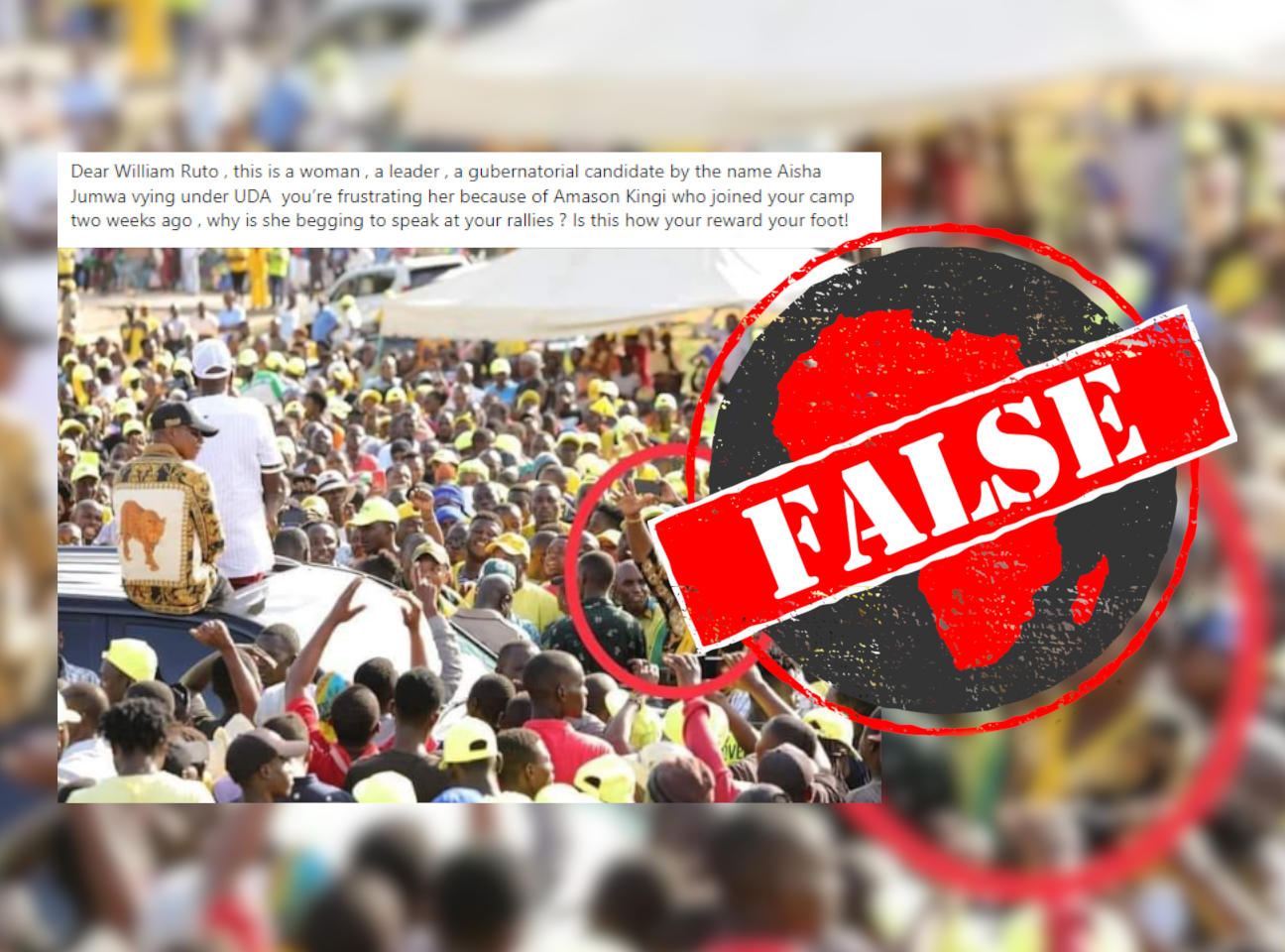 A Google reverse image search of the photo reveals that it was taken during a Kenya Kwanza rally in Malindi on 25 May.

The search led us to a video of the event, streamed live on YouTube by TV47 Kenya.

In the video, Ruto can be seen acknowledging Jumwa’s presence and endorsing her as the next governor of Kilifi. Jumwa then waves to the crowd.

Ruto and Kingi did not ignore Jumwa at the rally.