Several posts doing the rounds on Facebook in June 2022 claim that KwaZulu-Natal’s provincial transport minister, Peggy Nkonyeni, is in hospital after being in an accident caused by potholes.

The posts include three photos, one of large water-filled potholes in a tarred road, and two of a badly damaged black BMW.

The last sentence in isiZulu translates to “in Zulu it is said that ‘a spear pierces the home’”. It seems to be pointing out the irony that the government official responsible for road maintenance was affected by poor road conditions.

Other Facebook posts claim that the accident was caused by a burst tyre.

So what’s the truth here? We checked. 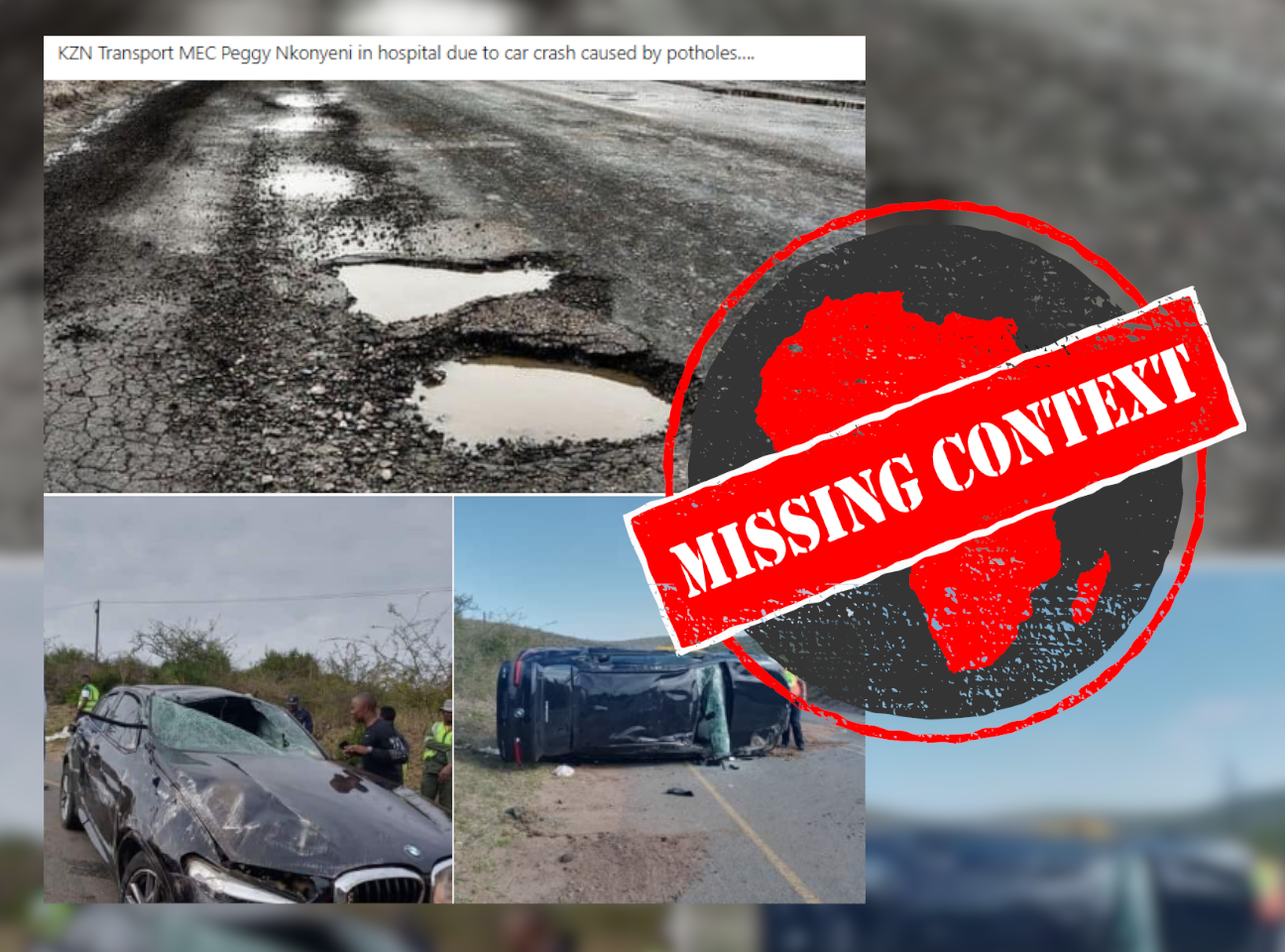 Accident probably due to burst tyre

Peggy Nkonyeni has served as the KwaZulu-Natal member of the executive council (MEC, or provincial minister) for transport, community safety and liaison since March 2019.

A quick Google search for “Peggy Nkonyeni accident” brought up several news articles about the car accident. But while most reported it was because of a burst tyre, the cause of the burst tyre wasn’t clear.

According to local broadcaster eNCA, “Nkonyeni and her bodyguards were travelling from uLundi earlier today, when the car burst a tyre”.

The town of uLundi is in the Zululand district municipality.

Nkonyeni was on her way to launch a youth empowerment programme, reported TimesLive, and the accident took place on provincial route the R66.

It was reported that Nkonyeni received treatment in hospital after the accident, according to eNCA.

The accident was reported by numerous trusted local media outlets, none of whom said the burst tyre was caused by going over a pothole.

While acknowledging that there was a “pothole problem” in many parts of the province, a spokesperson for the KwaZulu-Natal department of transport, Thuba Vilani, said the cause of the MEC’s accident hadn’t been established.

Vilani told Independent Online: “On the accident, I cannot comment because we are waiting on the investigation. All we know was that the car had a tyre burst.”

At least two media outlets published the photos of the black BMW when reporting on the MEC’s accident.

But a TinEye reverse image search of the photo of the potholes revealed it was a generic stock image and not linked to the accident.

The image can be found on the stock image websites of Adobe, Shutterstock and Depositphotos.

The available evidence only shows that Peggy Nkonyeni’s accident was as a result of a burst tyre. There’s no evidence for what caused the burst tyre – potholes, or something else.