After clashes between security forces and unknown assailants in Imo state in southeastern Nigeria on 25 January 2021, many social media users shared photos online, claiming they showed the clashes between troops and a local militia.

One tweet includes a photo of heavily armed men in military fatigues, with the claim they are soldiers in Orlu, in Imo state, “going streets killing Innocent Nigerians in their homes”.

The claim has been retweeted 696 times and shared in multiple other social media posts.

Another set of four photos was shared in a Facebook post and elsewhere, apparently showing Eastern Security Network soldiers “from the bush” repelling military attacks. The photos are of heavily armed men in uniform, and appear to have been taken in different locations. 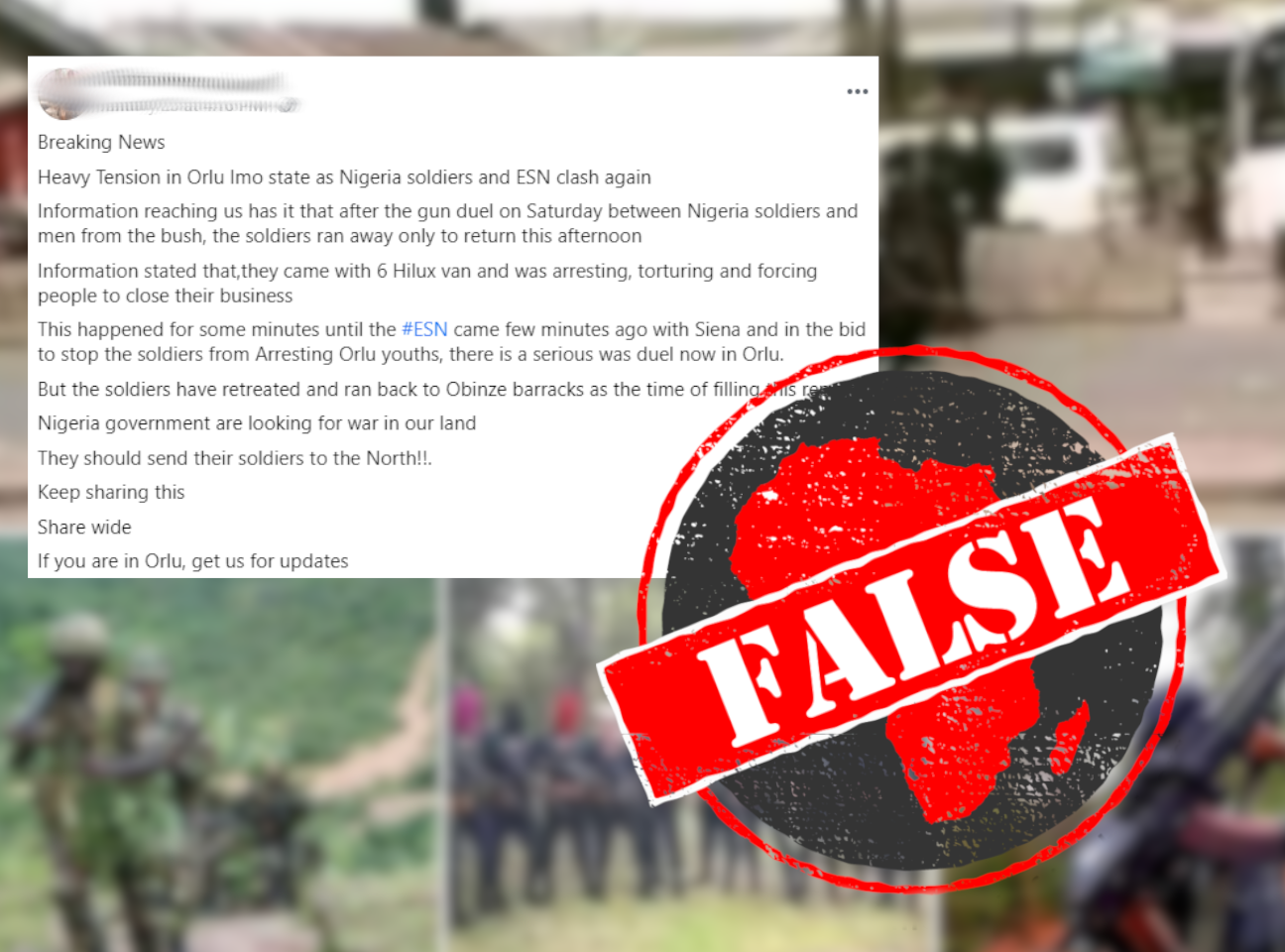 For over a decade, Nigeria has battled insurgency, banditry and kidnapping from the Islamist military group Boko Haram. This has led to different regions of the country launching regional security outfits.

The northern part of Nigeria launched Shege Ka Fasa in early 2020, shortly after the southwest of the country established Amotekun.

In response to Amotekun, Nnamdi Kanu, the leader of the  Indigenous People of Biafra, or Ipob, formed the Eastern Security Network (ESN) in December 2020. Kanu claimed this was to protect the eastern region from terrorists and bandits from the north.

In 1967 the southern region of Biafra declared itself an independent state from newly independent Nigeria. Nigeria’s government rejected the secession. A brutal civil war followed. More than 50 years on, Biafra’s sympathisers continue to call for its independence, chief among them Kanu and his supporters.

Many have reportedly died in repeated clashes between the Nigerian army and the ESN. But pro-Biafran social media accounts continue to spread false claims about the violence.

Africa Check looked at whether the photos shared on social media have been accurately captioned.

No Nigeria Army Hiluxes going around to kill innocent Nigerians

We first did a reverse image search of the photo shared widely on Twitter, and traced its origin to Kenya. It is from 2013, and was taken in Nairobi, the capital of Kenya, and originally published by news agency Associated Press.

It was reprinted by Hürriyet Daily News, a Turkish English-language newspaper, with the caption “Kenyan army soldiers patrol near the Westgate Mall in Nairobi, Kenya” on 24 September 2013.

It illustrates an article with the headline “Shebab fighters say still holding hostages in Kenya mall siege”. Al-Shabaab militants linked to Al Qaeda had stormed an upscale shopping mall in Nairobi in a siege which lasted 80 hours and led to at least 67 deaths.

A closer look at the photo also reveals that the number plate of the Jeep in the background includes the letters GK, which indicates it is a Kenyan government vehicle.

Next we searched for the photos shared on Facebook by the “Biafra News channel” page. The first photo shows armed men kneeling side by side on a highway. It has been online since at least 2017, long before the establishment of the ESN, and used to illustrate various pro-Biafra claims.

The second photo shows troops camouflaged with grass and climbing a mountain. It appeared in a 2003 report by the New Humanitarian, a non-profit news organisation. It is credited to “Nigerian Defence Headquarters”. It is also unrelated to any ESN activities.

The third photo of 15 masked men holding what appear to be rifles was previously published in a discussion thread on the online forum Nairaland on 13 December 2020. It has been used widely to illustrate the ESN, but we could not establish exactly where and when the photo was taken.

But the fourth photo provided some clues. It was used in a pro-Biafra story posted on a website that primarily brands itself as a “job recruitment portal”, but also posts Nigerian celebrity gossip and news about Kanu and Ipob.

The headline to the story reads: “Reactions as IPOB dares Nigerian government, says ‘Eastern Security Network’ has come to stay”. It lists social media reactions to the establishment of the ESN.

And it includes a video, showing ESN training exercises, posted by the job recruitment website on YouTube on 25 December, and elsewhere on 19 December.

Two of the photos shared on Facebook appear to be stills from the video. There is no evidence these, or any of the other photos, show clashes between the ESN and the Nigerian army.