A photo of the burned-out hull of an aircraft has been circulating on Facebook in May and June 2021 with the claim it shows a Nigerian air force jet that crashed in Akure, Ondo state – and that the military has been concealing the loss.

“Breaking: A Nigeria Airforce Jet Heading To Orlu Has CRASHED in Akure, Ondo State....Nigeria Military Is Covering / Hiding The Air-Disaster,” reads a typical caption to the photo.

Akure is the capital of Ondo, in southwestern Nigeria. Orlu is the second-largest city in the southeastern state of Imo.

But did the plane in the photo really crash in Akure? And is Nigeria’s military covering up the incident? 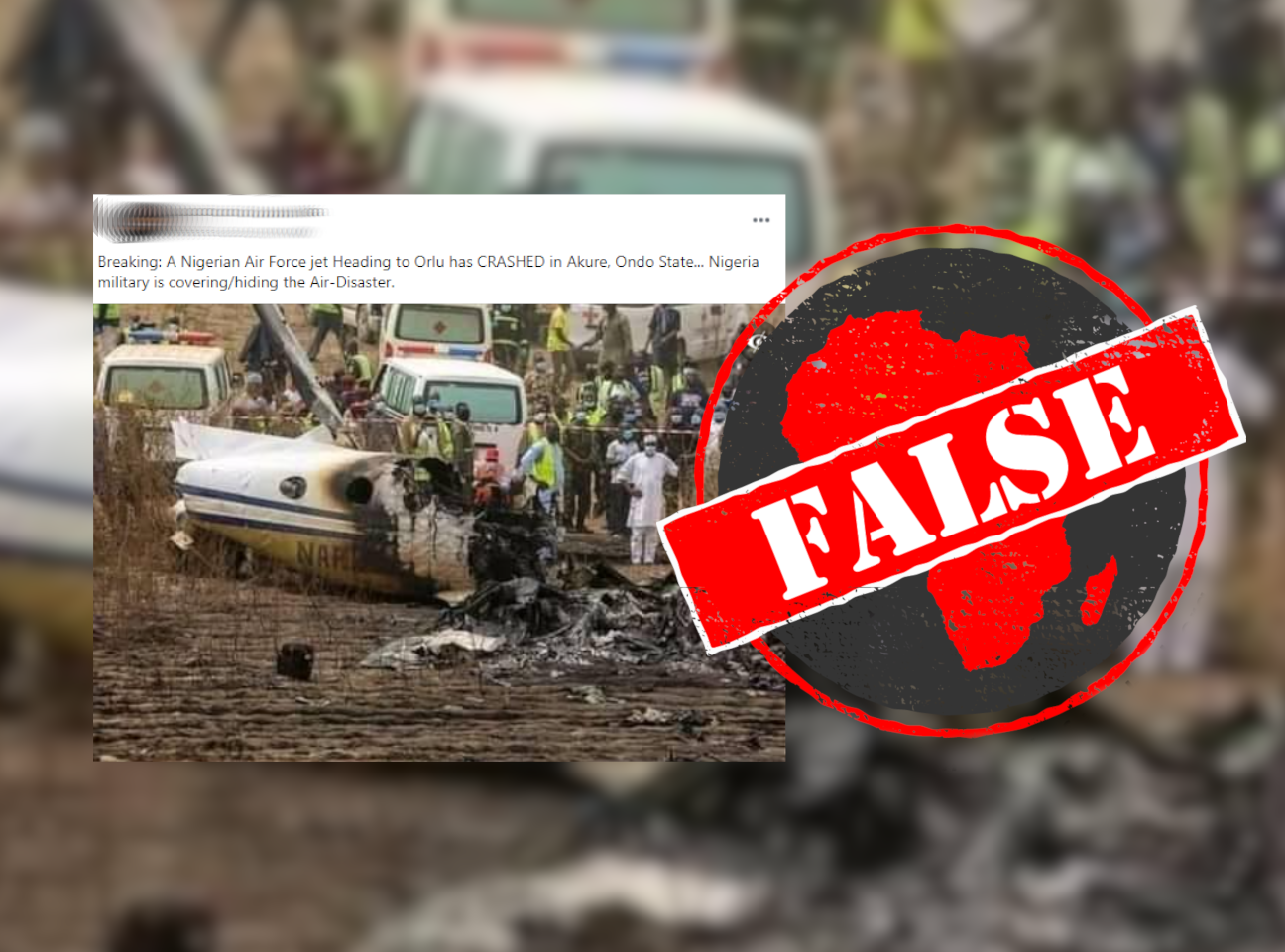 A TinEye reverse image search reveals that the photo has been online since at least February 2021, with most of the search results crediting it to the Reuters news agency.

One of the Reuters pages served up is headlined: “Nigerian air force passenger plane crash kills seven people.” Its dateline gives the location as Abuja, a city in the centre of Nigeria and the country’s capital. The article says an army spokesperson confirmed the crash.

The photo can also be found on the Alamy stock image website, credited to Reuters. Here its caption reads: “Rescuers and people gather near the debris of a Nigerian air force plane, which according to the aviation minister crashed while approaching the Abuja airport runway, in Abuja, Nigeria February 21, 2021.”

Using these details we searched a database maintained by the Aviation Safety Network, an accident tracking website.

We found an entry on 21 February about a crash involving a Beechcraft B300 King Air 350 belonging to the Nigerian Air Force. All seven occupants were listed as killed. The plane’s registration was given as NAF201. The first two of the letters are clearly visible in the photo.

The plane had taken off from the Nnamdi Azikiwe International Airport in Abuja and was headed to Minna airport, 110 kilometres away in Nigeria’s Niger state. But shortly after takeoff it reported engine loss and crashed.

The plane in the photo crashed in Abuja in February 2021 – not in Akure, and not in May or June.

Is Nigeria’s military “hiding” the crash?

On the day of the accident, Nigerian president Muhammadu Buhari tweeted that he was “deeply saddened by the fatal crash”.

Deeply saddened by the fatal crash of the @NigAirForce KingAir B350i aircraft today in Abuja, that claimed the lives of seven personnel. On behalf of the Federal Government, I extend heartfelt condolences to family members, friends and colleagues of those who died.

The army’s statement on the loss of the Beechcraft KingAir B350i registration NAF201 was also widely reported, including internationally.

This is to confirm that a Nigerian Air Force (NAF) Beechcraft KingAir B350i aircraft crashed while returning to the Abuja Airport after reporting engine failure enroute Minna. First responders are at the scene. Sadly, all 7 personnel on board died in the crash

Some of the claim’s details seem to be taken from a May 2021 story by a Nigeria-focused online publication that a military aircraft had allegedly crash-landed in the Akure area, and the incident supposedly kept under wraps. The Nigerian army is reported to have denied this.