Photos of firecracker explosion in India, not air bombing in Orlu, Nigeria

The town of Orlu in Imo state, southeastern Nigeria, started trending on Twitter on 18 February with rumours of airstrikes. It was said that Nigeria’s military were bombing the town in pursuit of the Eastern Security Network (ESN), the paramilitary wing of the banned Indigenous People of Biafra (Ipob).

One Twitter user posted two blurry photos of an explosion, with the caption: “currently air bombardments in Orlu Imo State by Nigeria soldiers. Many innocent people have been killed with airstrikes ... @HQNigerianArmy is currently looking for #ESN who are checkmating the activities of killer Fulani herdsmen.”

But do the photos show air bombardments by Nigerian soldiers in Orlu on 18 February? We checked. 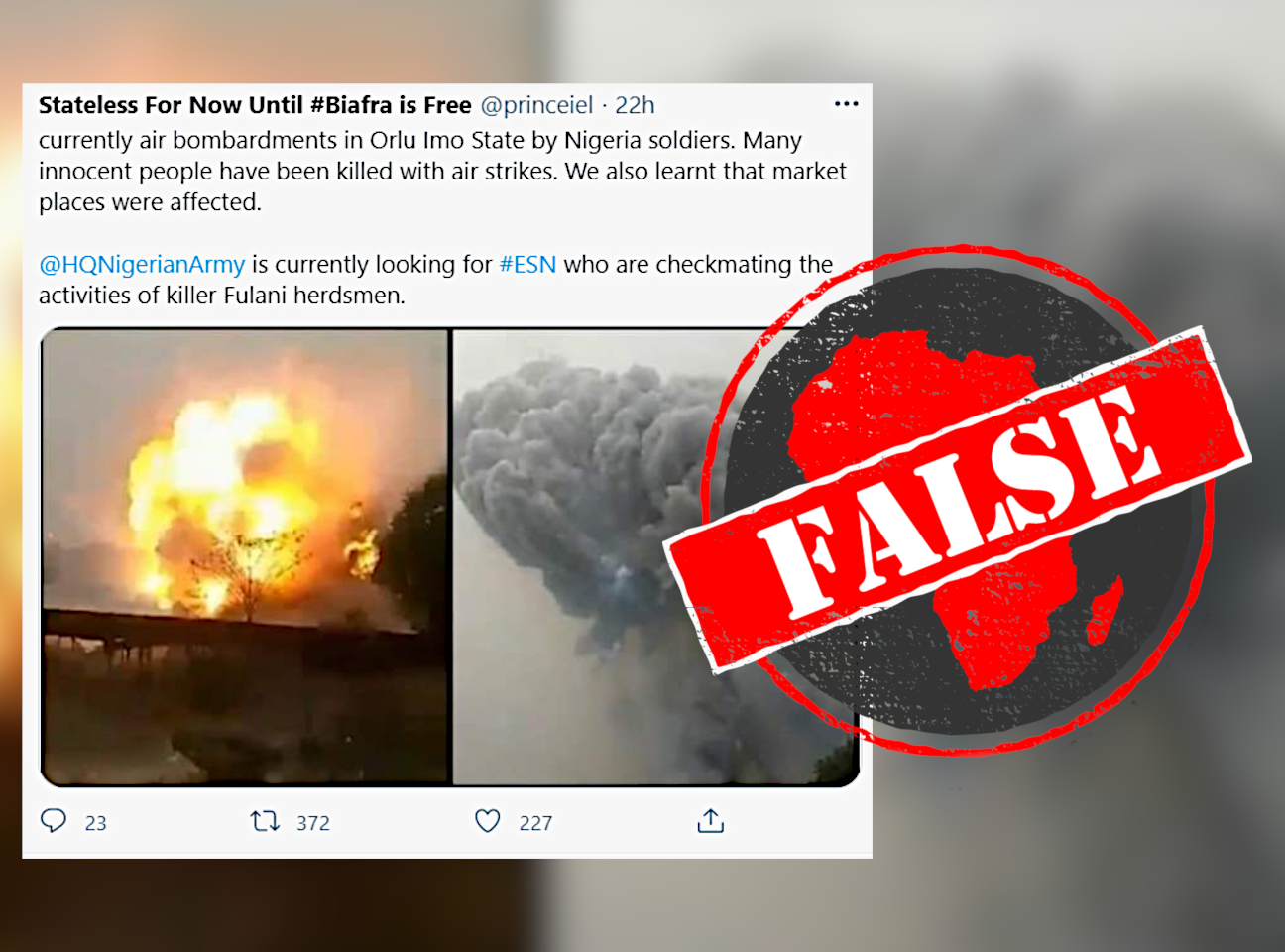 Illegal firecrackers exploded while being defused

A Google reverse image search reveals that the photos are more than a year old, and are from in India.

They appear in a 10 January 2020 article on the India Today website, headlined: “Massive explosion triggered as bomb squad tries to dispose off firecrackers in Bengal's Naihati”.

According to the article, the explosion in the town of Naihati in the state of West Bengal was triggered when the bomb disposal squad was trying to defuse a large number of firecrackers recently seized from illegal manufacturers in the area.

The photos are in fact frames from a video of the explosion India Today tweeted on 9 January 2020.

Explosion noticed in WB's Naihati town when bomb disposal squad tried to dispose off a large cache of illegal fire crackers seized during raids. No casualty was reported. However, some nearby houses noticed cracks. #UserGenerated | @iindrojit
More videos: https://t.co/FAHzdk9TO8 pic.twitter.com/MgzcTZCbdE

They do not show bombing in Orlu, Nigeria, in February 2021.

But what’s really going on in the town?

There have been conflicting reports about the airstrikes in the Orlu. Chinwe Nchekwube, who has a brother in the town, told Africa Check he had dismissed the rumour.

“My brother said there is no military bombing in Orlu town. He only mentioned an armed robbery operation two days ago or so,” Nchekwube said.

Africa Check asked Imo state police spokesperson about the rumoured bombings. “There is none that I know of,” he said.

The Nation newspaper reported: “There was panic in Orlu, Njaba and Orsu Local Government Areas of Imo State on Thursday, following a combined military and police operation in search of Eastern Security Network (ESN) camps and members.”

And Vanguard newspaper said that on 17 February the Nigerian military launched attacks on ESN camps in parts of the forest in the Orlu and Orsu local government areas of Imo state. The military had reportedly received information that ESN had set up an operational base there.

The Nigerian government tweeted some confirmation of the operation, but not much clarity.

“The Nigerian Army, in line with its constitutional mandate, wishes to reassure the general public that troops in operational synergy with sister security agencies are in pursuit of the criminal elements in order to ensure safe return of the kidnapped victims.”

“The Nigerian Army, in line with its constitutional mandate, wishes to reassure the general public that troops in operational synergy with sister security agencies are in pursuit of the criminal elements in order to ensure safe return of the kidnapped victims.”—@HQNigerianArmy

There have been reports of military action in Orlu, but none of airstrikes. And the photos in the tweet are from India.