Selling illegal, but no fine for cigarette possession under South Africa’s Covid-19 lockdown

Smokers caught by the South African police with black market cigarettes will be fined R1,500. That’s the claim in a Facebook post from 15 May 2020 and a WhatsApp voice note Africa Check received.

The post shows a front page story in the Daily Voice newspaper about a young man being killed for a R10 “entjie” – a half-smoked cigarette.

“A young man was stabbed to death for asking R10 a cigarette, his killer is out on bail (R500 bail for killing someone) but people get fined R1500 - R5000 for having a packet of smokes on them. ? - Welcome too South Africa,” the post reads.

The WhatsApp voice note is in Afrikaans. It says police may search smokers and, if they find black market cigarettes, impose a fine of R1,500.

Tobacco products are outlawed under South Africa’s ongoing lockdown restrictions to combat the spread of the new coronavirus. This has seen a boom in the black market, with smokers reportedly paying up to R1,600 a carton.

But may the police issue hefty fines to smokers caught with a pack of cigarettes? We checked. 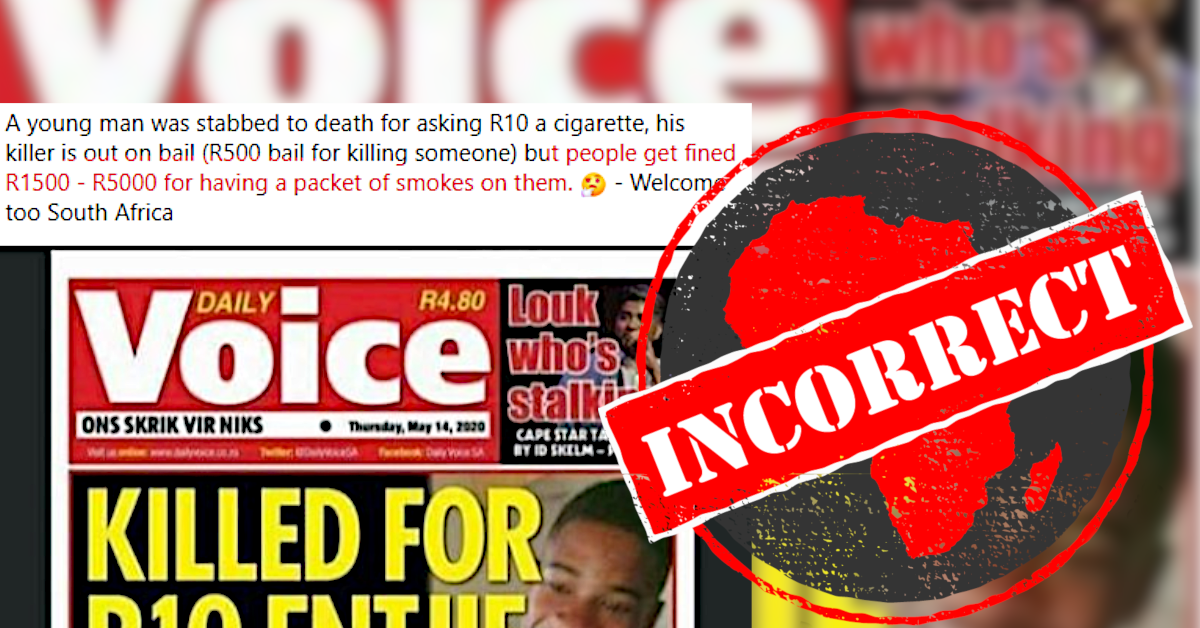 Section 27 of the lockdown regulations prohibit the “sale of tobacco, tobacco products, e-cigarettes and related products”. People caught selling cigarettes face a fine or up to six months in prison, according to Section 31.

But the regulations don’t say possession of cigarettes is an offence.

South African Police Services spokesperson Vishnu Naidoo told Africa Check that he had not heard of any fines being issued to people with cigarettes on them.

“What I know is that people will be in contravention of the regulations if they are seen buying or selling cigarettes,” he said.

A 20 April TimesLive article does suggest that people in possession of cigarettes may be questioned by police about where and when they bought them.

According to the report, a cyclist was caught with three boxes of cigarettes by police officers. But police arrested the shopkeeper who sold him the cigarettes. The cyclist was fined R1,000 for being outside his house, and not for possession of cigarettes.

Buying and selling cigarettes during the lockdown is a criminal offence. But there is no evidence that the police may issue fines to smokers caught with a box of cigarettes. – Naledi Mashishi