IN SHORT: Piles and piles and piles of cash stacked up in an otherwise empty room. The video has been used to accuse politicians of corruption in Cameroon, Russia – and now Nigeria. But the clip actually shows a sculpture by a Spanish artist, each bill made of hand-painted resin.

A November 2022 post on the professional networking site LinkedIn claims that a video of what looks like massive piles of cash, some of it burned, was taken in a room in the house of Nigerian senator Orji Uzor Kalu.

Kalu is a former governor of Abia state in Nigeria’s southeastern geopolitical zone. He’s the governing All Progressives Congress’s chief whip in the senate, where he represents the district of Abia North.

In December 2019 Kalu was sentenced to 12 years in prison for fraud. But he was released in June 2020 after a supreme court ruling.

“EFCC needs to go after @Orji Uzo Kalu, former governor of Abia state,” the LinkedIn post reads. “Look at how he starched [sic] European currency in his house.” It has attracted dozens of comments – some agreeing but others calling it “fake news”.

The EFCC is the Economic and Financial Crimes Commission, a state agency that investigates economic crimes in Nigeria.

Other comments referred to a Central Bank of Nigeria plan to redesign naira banknotes, the country’s currency. The news has led to banks getting cash deposits worth N52 billion in two weeks. 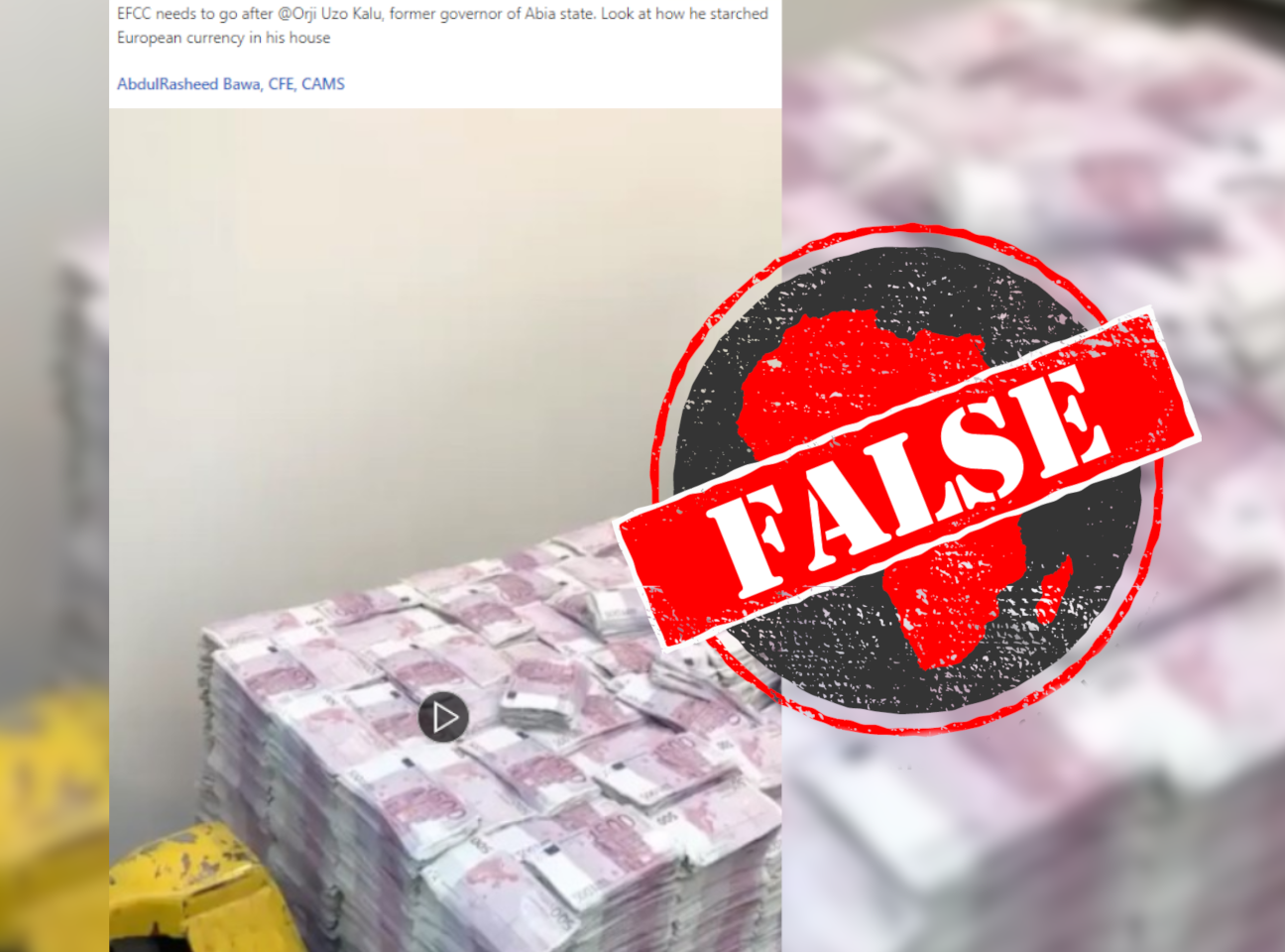 The Nigerian Fact-Checkers Coalition, which brings together fact-checkers and media houses, analysed the video using the InVid video verification tool. We found that the clip has been doing the rounds on the internet for a while, with several different descriptions of what it shows.

In 2019 the video appeared online in the Central African country of Cameroon.

It was used to claim that either Cameroon’s current minister of defence, or a former defence minister, was hiding the money in his house and that his wife had tried to burn it before police discovered it. Only former minister Edgar Alain Mebe Ngo’o was named in the claims. At the time, he was suspected of embezzlement.

The video also made headlines in Russia that year. This time the claim was that Rauf Arashukov, a Russian senator, had quietly tried to burn money he had corruptly stolen and stashed in his office. Arashukov had at the time been arrested on suspicion of two murders.

But neither of these claims are true.

The video actually shows a 2019 work by Alejandro Monge, a Spanish artist.

The stacks of cash are in fact part of a sculpture, with each banknote made of resin and entirely hand-painted. The sculpture is titled European Dream. The artwork has been displayed in the 3 Punts Gallery in Spain’s eastern city of Barcelona and in galleries in Madrid, the country’s capital.

In February 2019, Monge posted the video used in false claims on his Instagram page, to debunk the claims. The post, in Spanish, stresses Monge’s conviction that people should question what they see on the internet before they believe.

A translation of the post reads: “Monge_art: It’s what the internet has that something is not known because it goes viral ... and then no one knows what it is or to whom it belongs ... thank you for sending me where you are going to see them from New York to WhatsApp groups all over the world … well if people knew it’s a sculpture and the notes are hand-painted… @monge_art.”

In March 2019, Monge told France24 that he was conflicted about how his art was misused on social media.

“When I saw that my installation had been misappropriated in Russia, I had mixed feelings about it,” he said.

“At first, I laughed a lot and was flattered that my sculpture could fool so many people, which meant it was really realistic. But then I started to get a bit afraid because it was connected with a scandal in Russia, and I didn’t want to be associated with that in any way.”

He added: “My installation is a commentary on modern society and how everything revolves around money. I believe that money is the god of contemporary society.”

Monge clarified that the cash in the video was not real but, instead, hand painted.

“My sculpture is made up of about 500,000 hand-painted fake bills made out of resin,” he said.

The video does not show real money stashed in a room in a Nigerian senator’s house. The claim is false.

This report was produced by the Nigerian Fact-checkers’ Coalition as part of its civic contribution to the growth of democracy in Nigeria.