Tanzania’s Lake Natron not ‘deadliest’ place for animals, and bodies calcified, not turned to stone

A graphic doing the rounds on Facebook shows three eerie photos of grey, sculpture-like animals – a bat and two birds.

“Natron lake in Tanzania is the most deadliest place for animals,” the text reads. “Any animal which enters the lake turns into stone-like structure.”

Lake Natron is a real lake in the East African country of Tanzania. But is it “deadly” for animals, turning any that enter its waters to stone? We investigated. 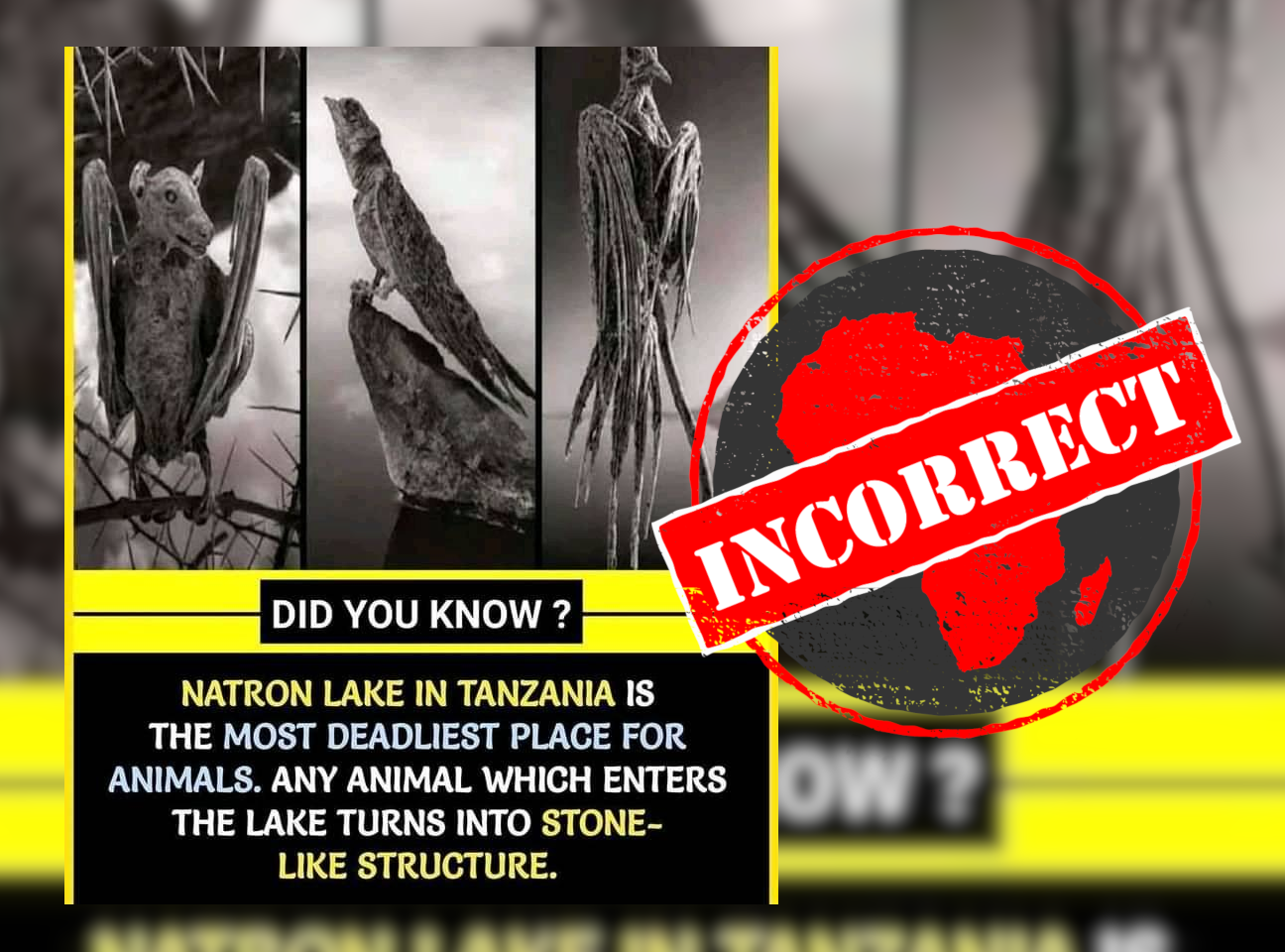 According to the Tanzania Tourist Board, Lake Natron is a soda lake where high levels of evaporation have left behind the minerals natron and trona.

The lake’s high alkalinity can reach a pH of more than 12 and the surrounding bedrock is “composed of alkaline, sodium-dominated trachyte lavas that were laid down during the Pleistocene period”.

The lake’s water is a concentrate of a caustic alkaline brine due to its significant amounts of carbonate and low levels of calcium and magnesium.

National Geographic says the photos were taken by photographer Nick Brandt, who “unexpectedly found the dead animals that had washed up on the shore, preserved by the lake, and posed them as they had been in life”.

The photos are part of Brandt’s Across the Ravaged Land collection, snapped from 2010 to 2012. The collection has been turned into a book, and includes several other photos of flying animals “petrified” by the soda lake.

Huffington Post quotes Brandt as saying in his book that “no one knows for certain” how the animals die, “but it appears that the extreme reflective nature of the lake’s surface confuses them, causing them to crash into the lake”. But there’s no evidence the lake is the “deadliest place for animals”.

Brandt told Huffington Post that the “soda and salt causes the creatures to calcify, perfectly preserved, as they dry”. The calcification made their bodies extremely hard.

“There was never any possibility of bending a wing or turning a head to make a better pose – they were like rock.”

But why don’t the animals fully decompose?

David Harper, an ecologist at the University of Leicester, told NBC News that a body would decompose if it fell anywhere else, “but on the edge of the lake, it just gets encrusted in salt and stays forever”.