Ugandan journalist Moses Bwayo injured, but only one viral photo shows him

A series of three photos shared on Facebook show an apparently injured man lying on the ground, a bloodied camera, and a man with a cut on his cheek. They were posted with the claim they show Ugandan video journalist and filmmaker Moses Bwayo.

Their caption reads: “Ugandan journalist, #MosesBwayo was today shot in the face by a rubber bullet as he was carrying out his journalistic work. Bwayo was filming National Unity Platform Party President Bobi Wine, who was headed to Kamwokya from Kibuli mosque.”

Bwayo has been repeatedly arrested and charged by Ugandan police for unlawful assembly, which many believe is because the journalist reports on opposition politicians. These include Robert Kyagulanyi, known as Bobi Wine, a popular musician running for president in the elections to be held February 2021.

The National Unity Platform, or NUP, headquarters are in Kamwokya, a neighbourhood in Uganda’s capital, Kampala.

Data from CrowdTangle, Facebook’s insights tool, shows that the photos claiming to show an injured Bwayo have been shared on groups and pages with thousands of followers.

But do the photos and caption show what really happened to the journalist? We checked. 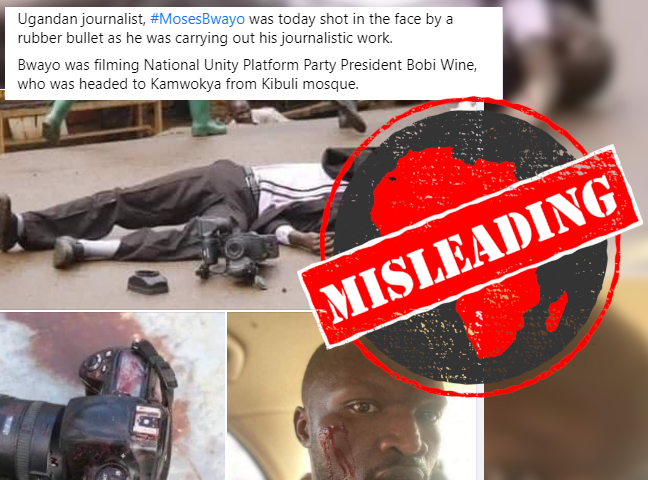 Only one photo is of Moses Bwayo

A Google reverse image search of the photo of the man lying injured on the ground reveals that it was first shared online on 17 November 2015.

According to the article by Ifex, an organisation that describes itself as a “the global network defending and promoting free expression”, the pictured man is another Ugandan journalist, Isaac Kugonza.

Kugonza was shot in the head by police on 16 November 2015 while covering a political event in Kampala. According to Ifex, two other journalists had been shot while covering Ugandan politics shortly before the incident.

The photo of the blood-stained camera shared on Facebook is also older than claimed. We found it was taken by Reuters photographer Feisal Omar on 25 January 2017 after an explosion in Somalia’s capital Mogadishu.

Only one of the photos shared is related to 2020 events or Moses Bwayo. A Google reverse image search of the photo of the man with the injured face led us to NUP’s official Twitter account.

On 5 November NUP shared the photo and tweeted: “Moses Bwayo, a journalist has been shot nearly into his eye while he was recording footage of Hon Kyagulanyi and NUP supporters as they returned from Kibuli where they attended prayers for the late Sheikh Anas Kaliisa earlier today. His only crime is exercising his profession.”

The Foreign Correspondents Association of Uganda, a lobby of journalists working for foreign media houses in the country, also condemned the incident.

“Moses Bwayo, a Ugandan journalist, was today shot in the face by police with a rubber bullet while filming. He is hurt but safe. Violence against journalists is a crime. We call on Ugandan authorities to condemn this attack and investigate those responsible,” the association tweeted on 5 November.

The Africa Centre for Media Excellence, a non-profit organisation supporting journalists, also condemned the attack on Bwayo and the ongoing violence against journalists in Uganda.

Only one photo shows Bwayo, who was shot at by police. The other two photos are shared out of context and from 2015 and 2017.