Video of leaking hospital roof not from Kiambu, Kenya but Onwe, Ghana

A video of a hospital ward with rain pouring through a leaky roof next to a patient in a bed has sparked questions about the healthcare system in Kenya.

“So sad!! This is a hospital in Kiambu county!” one post shared on Facebook says. In the video, a bucket on the floor has filled with water leaking from the roof.

The same video has been shared in multiple Facebook posts, all claiming that the flooded hospital shown is in Kiambu county in the Central province, north of Nairobi.

One user blamed the flooded hospital room on misuse of government funds: “SHOCKING! This is a hospital in Kenya’s Kiambu County, despite the country receiving billions of dollars in World Bank & @Internationalmonetaryfunds loans. #StopLoaningKenya #UnlockOurCountry But Our Media will tell us how charitable The President Is.”

Is this dilapidated hospital in Kiambu county? We went down an internet rabbit hole to find out. 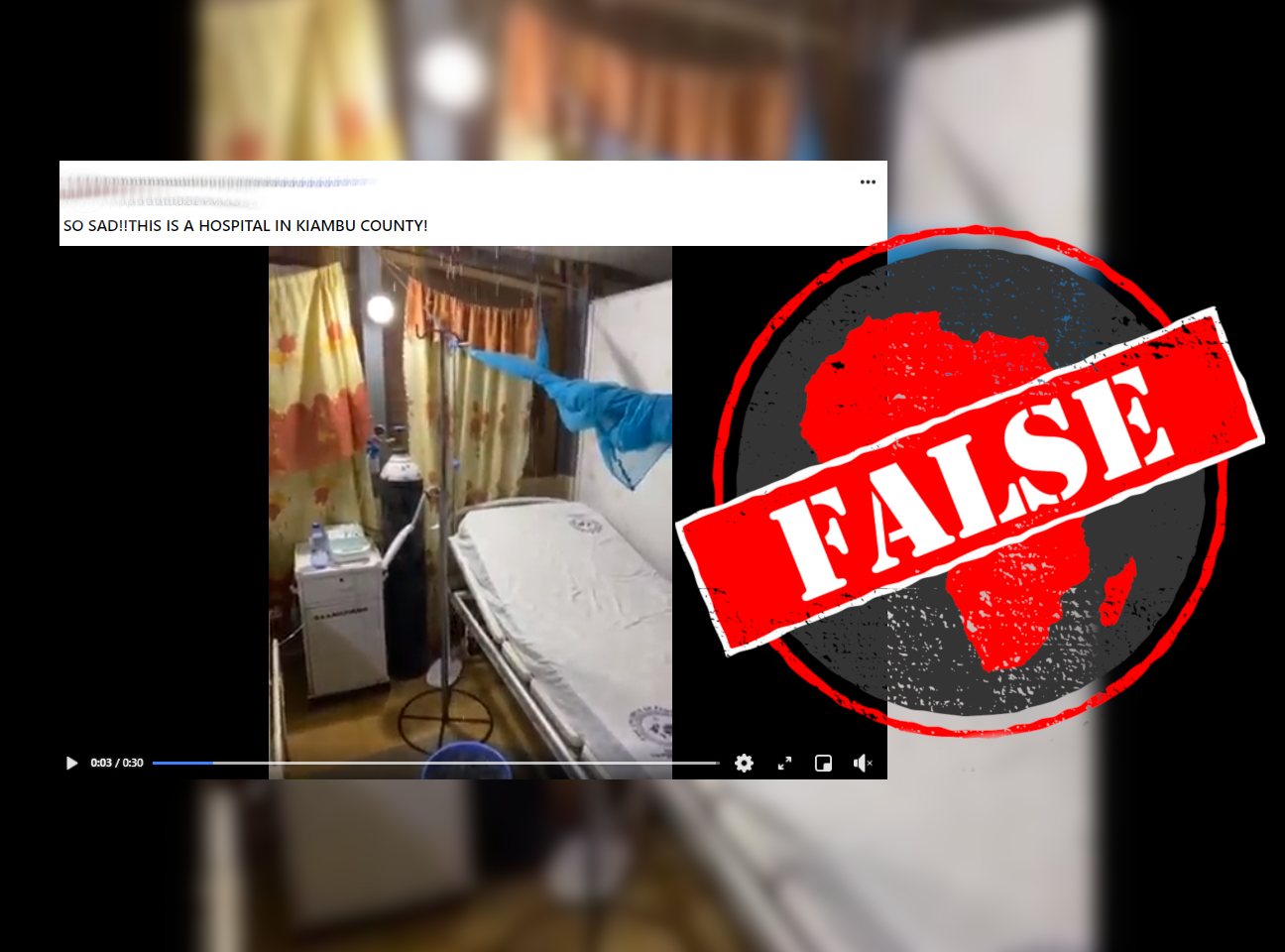 A search using the InVID video fragmentation and reverse image search tool revealed a number of similar French language YouTube videos. In these it was claimed the hospital was in Kinshasa, the capital of the Democratic Republic of the Congo.

A YouTube search with the French words for “rain” and “hospital” – “pluie” and “hôpital” – in turn led to videos that claimed the hospital was in Cameroon.

However a Facebook video search with the English words “hospital leaking” turned up a string of Facebook videos that claimed to be from Ghana and were published on 12 March 2021, which was the earliest date we had found.

We searched YouTube using the same English words, sorting the videos by publication date, and found a video that claimed the hospital was in Ghana, also published on 12 March.

Using the CrowdTangle tool, we then searched for videos published between 1 and 12 March, published by Facebook pages with admins located in Ghana, using the keyword “hospital”.

A Facebook post published on 11 March, sharing the video, claimed that the leaking room was in a hospital in the region of Ashanti in Ghana: “Owe Government hospital in the Ashanti Region Just about 25minutes drive from the city of kumasi It’s very sad oh Ghana.”

While a search for “Owe” came up empty, a Ghanaian government hospital database shows a hospital in the town of Onwe, in the Ashanti region.

Searching for “Onwe hospital” on social media revealed that a Ghanian radio station Joy99.7FM tweeted about the hospital’s dire condition on 24 March, saying it was using a makeshift structure to treat emergency cases.

“That facility recently saw severely ill patients on admission exposed to gushing rainwater. Though management has since patched the exposed roofing sheet, the emergency unit made of wood and plastic depicts the dire need of patients for better service delivery,” the radio station tweeted.

Joy News, a TV station affiliated with Joy 99.7 FM, ran a story about the Onwe hospital on 23 March, with the flooded room shown in the Facebook video clearly visible in the video. It was a “makeshift structure” constructed “in a bid to meet urgent demand for emergency care”.

“On 5 March this year, a storm ripped off the makeshift roofing, exposing severely ill patients to the vagaries of the weather,” the reporter, Erastus Asare Donkor said, while showing a clip of the video shared around the continent.

A health official told Donkor that the facility was inadequate. “If you are talking about a modern hospital, they don’t have it,” she said.

The video shared on Facebook shows a flooded makeshift hospital room at the Onwe Government Hospital in Ghana’s Ashanti region. It is not from Kenya, Cameroon or the Democratic Republic of Congo.

No, this woman not an unidentified aggravated robbery victim. Message part of increasingly common scam