Yes, more than 7 bee species are endangered, but extinction wouldn’t mean an end to strawberries, avocados or coffee

A graphic circulating on social media claims that seven species of bee are “on the endangered species list”. It adds that if all bees disappeared, strawberries, avocados, and coffee would also disappear.

But would the world really lose these crops if bees disappeared, and are seven species of bee classified as endangered? 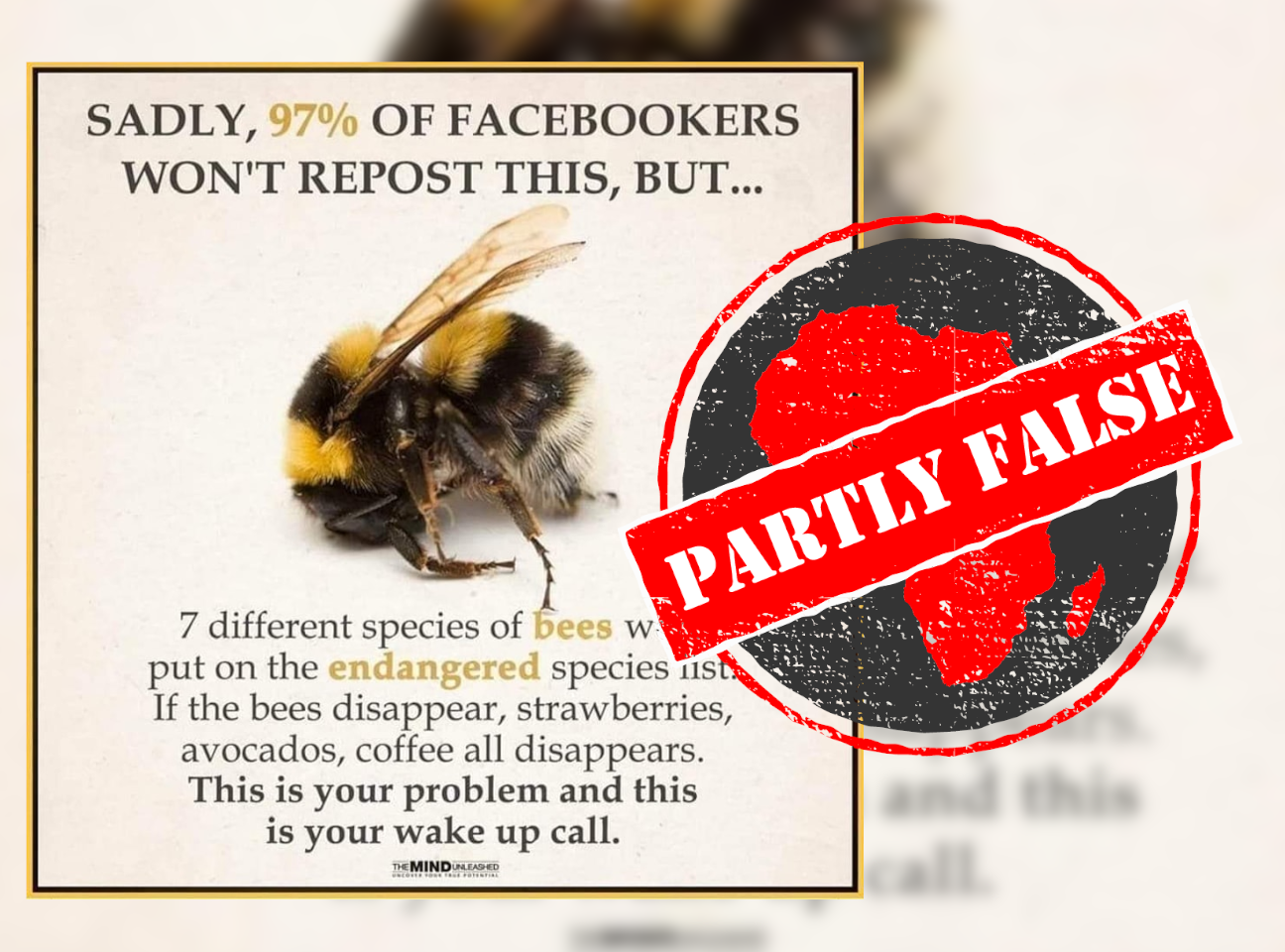 Populations of bees and other insect pollinators are in decline

Bees play an important role in the ecosystem by pollinating a wide variety of crops.

There are around 20,000 species of bee in the world. When we think of bees, we often picture bumblebees or the kind that make honey and live in hives. But the vast majority of bee species are solitary, meaning the bees don’t live in hives or have a queen.

Bee populations have been declining since the 1990s, along with other insects. According to scientists, there were around a quarter fewer bee species to be found between 2006 and 2015 than before 1990.

Reasons for the decline range from climate change to habitat loss and pesticide use, and, for bees that live in hives, a phenomenon called colony collapse disorder.

18 bee species around the world are endangered

The International Union for Conservation of Nature (IUCN) is an organisation that collects data on the population trends of known species. The data is used to categorise species by their conservation status on the Red List of Threatened Species, or IUCN Red List.

Species are categorised into levels of risk of extinction, from “least concern” to “extinct”, with the “endangered” status falling in the middle. Endangered is defined as “very high risk of extinction in the wild” and is based on how the wild population and its habitat has changed over time.

There are currently 18 species of bee on the IUCN endangered list, with another nine species classified as critically endangered and 16 species as vulnerable. But there are also hundreds of known bee species that scientists haven’t collected enough data on, so many more species could be at risk.

Most crops have many potential pollinators

Insects are responsible for pollinating an estimated three quarters of all food crops globally. The crops most vulnerable to there being fewer insect pollinators are stimulants such as coffee, fruit and oil-producing crops.

Africa Check spoke with Dr Daniel Cariveau, an entomologist at the University of Minnesota in the US, who studies wild bees and other pollinators. Without bees, there would be a lower yield of crops and they might be of a lower quality, he said. This would eventually mean they would become less available. But these crops “would still produce fruit and seeds and not disappear”.

Prof Francois Roets, an entomologist at Stellenbosch University in South Africa, told Africa Check that crops were not only pollinated by bees. This meant they would not disappear entirely if there were no bees.

Strawberry plants don’t need pollinators in order to produce fruit. But to get the most fruit, and higher-quality fruit, it is best to have a combination of self-, wind and insect pollination.

It is true that seven species of bee are on the IUCN endangered list – in fact, 18 bee species are considered endangered and another nine are classified as critically endangered. But while the extinction of bees would affect crop production, avocados, coffee and strawberries would not “disappear”.