Yes, our stomach acid can theoretically dissolve some metals – but don’t try it at home

IN SHORT: Stomach acid is highly corrosive and can dissolve some metals – but it takes a lot longer than the time food stays in the stomach. And ingesting metal is dangerous.

“Your stomach acid can dissolve metal,” claims a graphic posted on Facebook.

It shows an artist’s anatomical impression of the human stomach, orange liquid bubbling inside it.

The graphic was flagged as possibly false by Meta’s fact-checking system. Meta is the company that owns Facebook, Instagram and WhatsApp.

The graphic is pretty much correct, although it leaves a couple of points undefined. Let’s discuss. 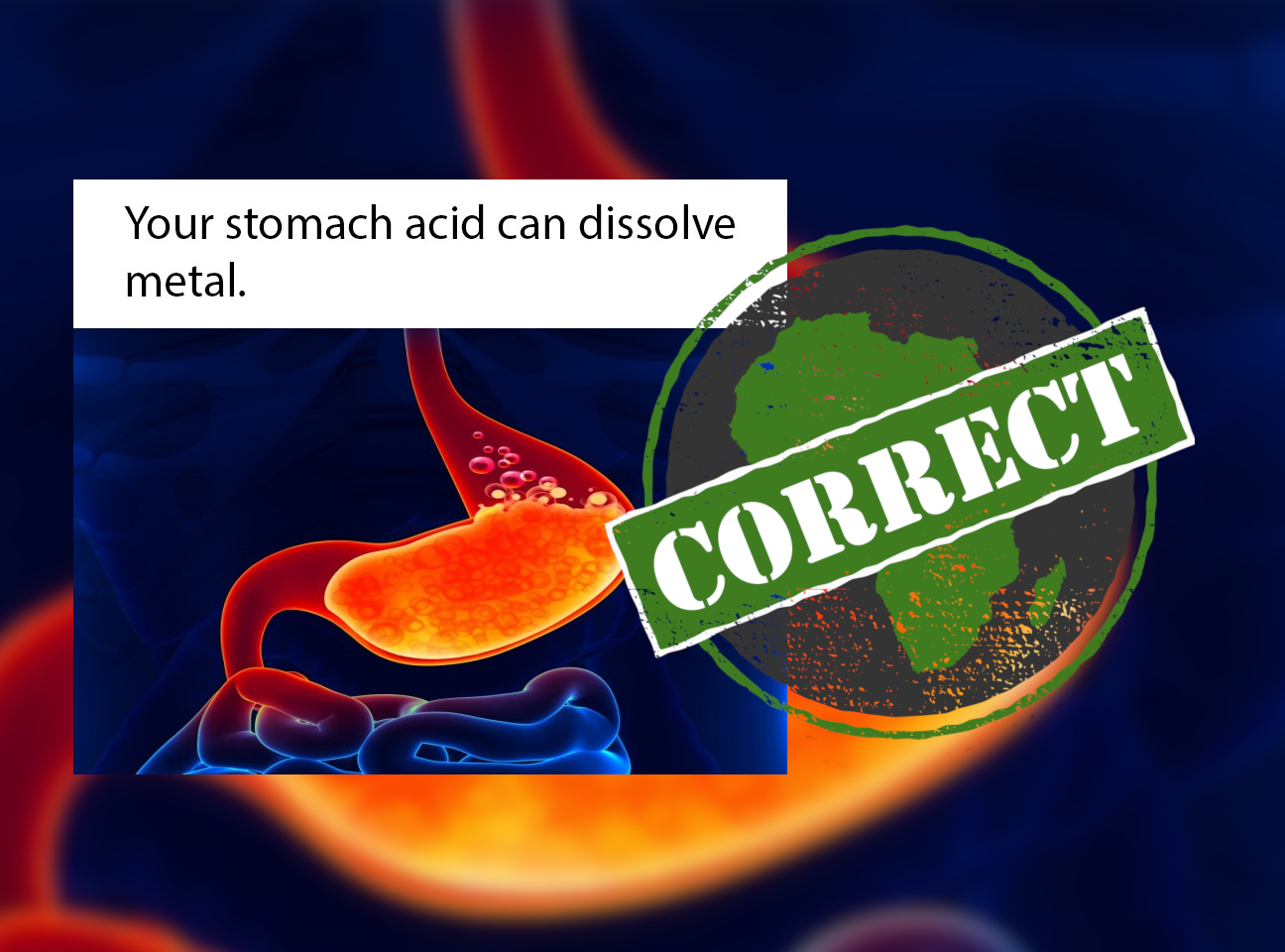 What is stomach acid?

Acids are corrosive liquids that break down the chemical structure of living tissue, organic compounds and metal.

They are measured on the pH scale, which ranges from zero to 14. Zero is the most acidic and seven – the pH of water, for example – is neutral. Liquids from seven to 14, such as household bleach, are base or alkaline. They are also corrosive.

Stomach acid, also known as gastric acid and gastric juice, is produced by the lining of the stomach. It has a low pH of 1.5 to 3.5, meaning it is highly acidic. It breaks down the food we eat, allowing our bodies to digest the nutrients.

Its acidic component is hydrochloric acid. This is described by a chemical safety site as a “strong, corrosive acid that can be used industrially to process steel”.

Several science sites support the claim that stomach acid can dissolve metal. But they don’t say whether the metal can actually be dissolved inside the stomach. And they don’t specify which metal.

According to Britannica, about “three-quarters of all known chemical elements are metals”. The most abundant metals in the crust of the Earth are aluminium, iron, calcium, sodium, potassium and magnesium.

In a 1997 study, scientists put razor blades, disk batteries and coins in a “simulated gastric juice” with the same properties as stomach acid to observe its effects.

After 24 hours, the blades were 63% of their original weight, meaning the acid had broken down roughly a third of the metal. But no “leak of contents could be detected” from the batteries, and the coins were unaffected.

The things we eat stay in the stomach for only 30 to 120 minutes before moving to the small intestine. That’s not enough time for stomach acid to have any meaningful effect on metal.

So while stomach acid can theoretically dissolve metal, it can’t do it inside the stomach. And ingesting metal objects is dangerous.