“The return of the pink dolphin,” reads a graphic doing the rounds on Instagram in South Africa. It shows a photo of an undeniably pink dolphin lifting its head out of the water.

“Due to the lockdown in March, suspended ferry services between Hong Kong and Macau resulted in a 30% rise in sightings of this endangered species.”

Facebook’s fact-checking system has flagged the graphic as possibly false. Is there any truth to this heart-warming claim? 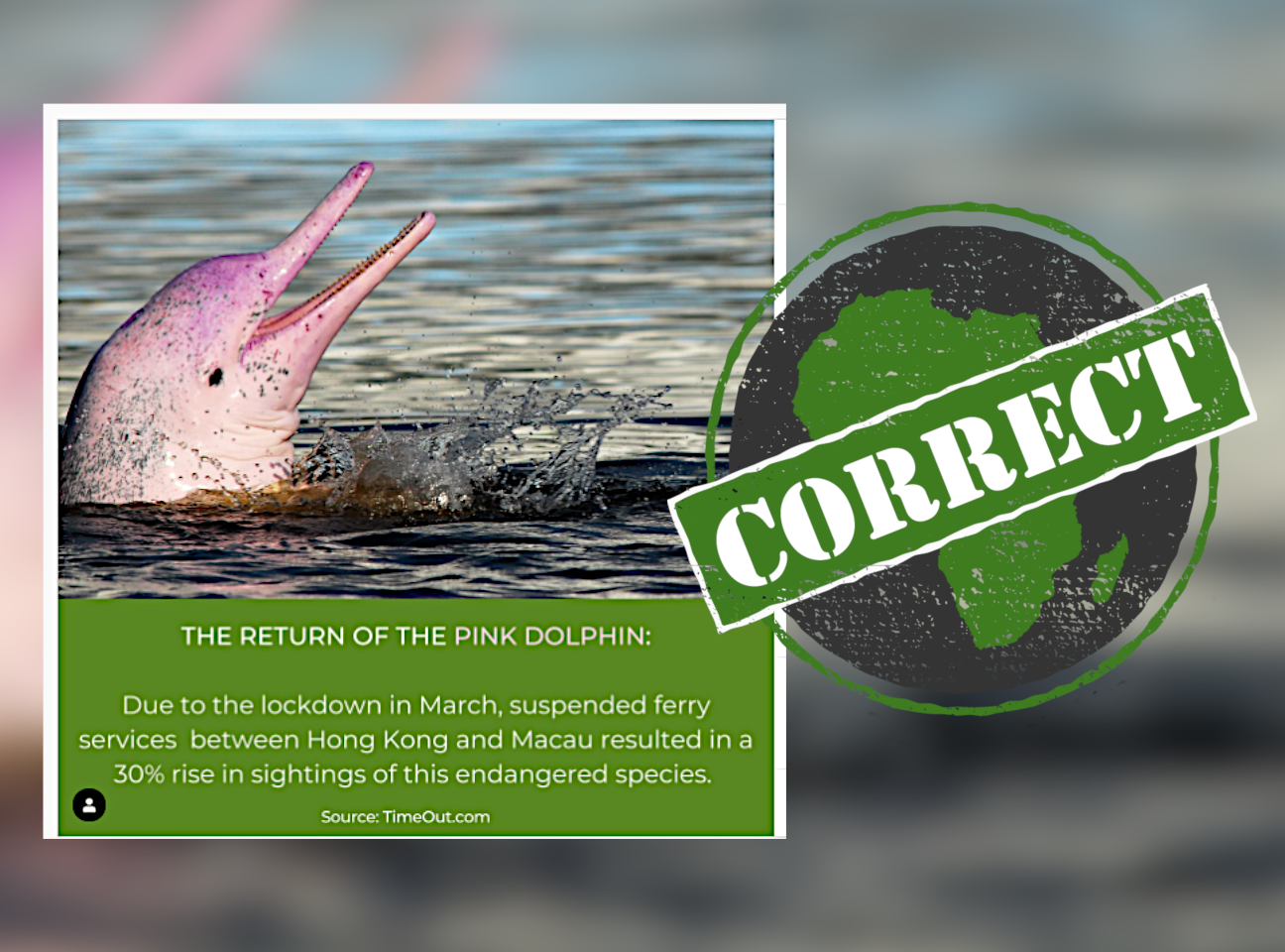 The photo shows a dolphin from a species often referred to as pink dolphins. They are also known as Chinese white dolphins and Indo-Pacific humpback dolphins. Their species name is Sousa chinensis.

The largest population of Chinese white dolphins is found in the coastal waters between Hong Kong and Macau on the south coast of China.

“There are only 32 individuals in Hong Kong,” says the Hong Kong chapter of the World Wide Fund for Nature (WWF). The population is stable “but threats continue to be serious and are mounting”.

The species is listed as “vulnerable” on the International Union for Conservation of Nature’s Red List of Threatened Species.

The WWF says that over the past few years the number of young Chinese white dolphins has worryingly decreased in Hong Kong waters.

In October 2020 the Hong Kong Free Press website reported that pink dolphins were migrating back to the waters between Hong Kong and Macau, after ferry traffic between the states was halted by the coronavirus lockdown.

An AFP news agency video, posted on Twitter, shows the dolphins swimming, feeding and socialising near Hong Kong and Macau.

VIDEO: Rare pink dolphins are enjoying a comeback in the waters between Hong Kong and Macau after the coronavirus pandemic halted ferries, but scientists remain deeply concerned about their long-term survival in such a busy thoroughfare. pic.twitter.com/ohzb4Hy3jD

South African news site eNCA also reported on the migration, saying that while the dolphins’ numbers had declined by 70% to 80% in the past 15 years, “their numbers ... bounced back” after the pandemic halted human activity.

Researchers are now able to study how the mammals “have adapted to the unprecedented quiet”.

Dr Lindsay Porter, a Hong Kong-based marine scientist, told eNCA that the number of pink dolphins on the coast of Hong Kong and Macau had increased by about a third since March 2021.

What’s Kenya’s external debt and how much does it owe China?