Yes, Zapiro cartoon gets the numbers right: about 30% of South Africa’s eligible voters actually voted in the 2021 local elections

“THE STATE OF SA DEMOCRACY” is the title of a cartoon by Zapiro, South Africa’s award-winning political cartoonist Jonathan Shapiro, published in the Daily Maverick the day after the results of the country’s 2021 local government elections were released.

The cartoon’s first panel shows a hand with a stripe of blue ink on the thumb. This ink is applied at polling places to indicate that a person has voted. Text above reads: “Of 38,6 million eligible voters, 30% VOTED.”

The second panel shows a hand with no ink on the thumb – and the middle finger raised. The text reads: “70% DIDN’T.”

The countrywide elections for municipal councils were held on 1 November 2021.

Shapiro’s cartoon has found its way onto Facebook, where the social network’s fact-checking system flagged it as possibly false.

Does South Africa have 38.6 million eligible voters? Did only 30% – about one in three – cast their ballots on 1 November? Did 70% stay away? We checked. 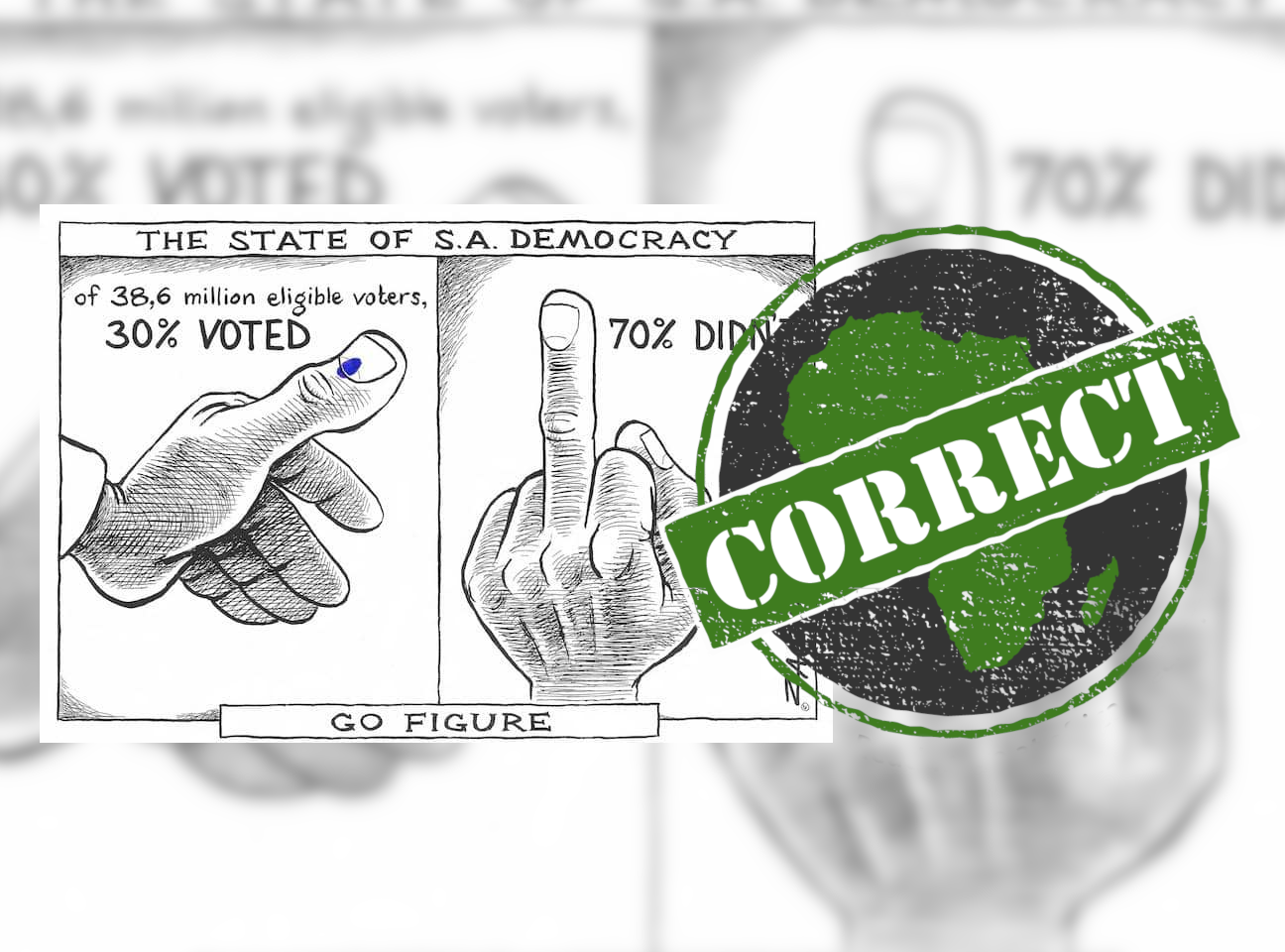 The key word here is eligible. Eligible voters are people with the right to vote – essentially, citizens aged 18 and older, as set out in the South African constitution’s bill of rights.

Eligible voters are distinct from registered voters: people eligible to vote who have registered their details with the Independent Electoral Commission (IEC). If you’re not registered, you can’t vote.

When Africa Check asked Shapiro for the source of his figures, he gave us two.

The first was a Daily Maverick article by veteran journalist Ferial Haffajee, also published on 2 November. The second was a press release by local TV news channel eNCA, published in late October and reporting the results of a telephone survey looking into “the South African electorate and prevailing opinions on local government”. The survey, commissioned by eNCA, was conducted by global market research consultancy Ipsos.

Haffajee’s article discusses the ruling African National Congress’s prediction that its supporters would “stay away in droves” from the 2021 elections.

She writes: “In an election of worsts, voter turnout was also at its lowest – of the 38.57 million eligible voters, only 26.2 million registered and less than half of those turned out to vote.”

The Ipsos press release, published a few days before the polls, is headlined: “A third of South Africans will decide the outcome of the local government elections.”

Shapiro told us: “I based my calculations on a combination – mainly on Ferial Haffajee’s figures.” He added that he had rounded the final figures to 30% and 70%.

South Africa has a population of 60.14 million people, according to Statistics South Africa’s 2021 mid-year population estimates.

The estimates break the population down into five-year age groups: 10 to 14, 15 to 19, and so on. This makes it difficult to extract the exact number of eligible voters, as people aged 18 and 19, who can register to vote, are included with those aged 15 to 17, who can’t.

So Africa Check asked Stats SA if they had a more detailed population breakdown.

Taking rounding into account, the figures in Shapiro’s cartoon are spot on. About 30% of South Africa’s eligible voters actually voted in the 2021 elections, meaning that roughly 70% didn’t.

Rounding numbers does give us a sense of statistics. But exact numbers are important. To find out why, see Africa Check’s guide to accurately reading and reporting numbers.